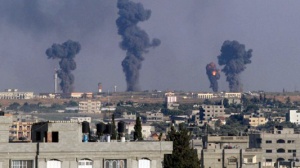 On 8 July Israel launched “Operation Protective Edge” in the Gaza Strip followed, on 17 July, by an ongoing ground invasion. Reminiscent of “Operation Cast Lead” in December 2008 to January 2009 and “Operation Pillar of Defense” in November 2012, there have been violations of international law committed both by Israel and Palestinian resistance groups. Yet, as with previous operations, the framing of “Operation Protective Edge” by both the media and world leaders has not only distanced this latest round of hostilities from the wider context of Israel’s 47 year-old occupation of the Palestinian territory – namely the West Bank, including East Jerusalem, and the Gaza Strip - but has also framed the discourse in a manner that largely legitimises Israel’s violations of international law.

As a Palestinian human rights organisation established to protect and promote human rights and the rule of law in the Occupied Palestinian Territory (OPT), Al-Haq has sought to address the widely inaccurate interpretations of international law that appear to justify Israel’s actions during “Operation Protective Edge”.

Why Israel’s “self-defence” justification is misleading

The UN Charter obliges all Members to refrain from the threat or use of force, with the sole exception of the “inherent right of individual or collective self-defence if an armed attack occurs against a Member of the United Nations”. This provision of the UN Charter forms the basis of the jus ad bellum – otherwise known as the body of law that regulates how and when UN Member States can resort to the use of force, i.e. it is applicable before an armed conflict erupts.

“Operation Protective Edge”, however, has been launched within the context of an ongoing occupation. Occupation in itself is a phase in armed conflict in which the previous invasion phase has ceased and authority is exercised and established by the Occupying Power. As such, the applicable body of law is international humanitarian law (IHL), which forms the basis of the jus in bello – otherwise known as the laws that regulate an ongoing armed conflict. Once in the throws of an armed conflict, as Israel has been since it occupied the OPT in 1967, the initial resort to force has already occurred and all ongoing and future use of force must be regulated exclusively by IHL, which does not include a “self-defence” provision. Instead, IHL recognises the reality of armed conflict while seeking to limit the humanitarian cost with a number of fundamental provisions, from which there can be no derogation. The prohibition against intentionally targeting civilians and civilian infrastructure and the obligation to take all precautions in attack to avoid civilian casualties are two crucial tenets of IHL.

Furthermore, Israel’s use of the “terrorism paradigm” to justify its attacks on the Gaza Strip is legally flawed. As the Occupying Power, Israel already exercises effective control over the OPT according to the rules of IHL. As such, rockets fired from the Gaza Strip cannot be viewed as an external threat of terrorism, but instead must be addressed within the context of a belligerent Occupant’s duty to maintain order within the occupied State under the laws governing belligerent occupation.

Regardless, the UN Security Council has made it clear that any actions combating terrorism must be in line with international law, particularly international human rights, refugee and humanitarian law. Therefore, Israel’s claim that it is engaged in a conflict to combat alleged terrorism does not absolve it from its obligations as a party to the conflict. As such, IHL and international human rights law (IHRL) remain the applicable bodies of law for any Israeli actions taken in the Gaza Strip no matter the pretext. Furthermore, it must be noted the obligation to respect and ensure respect for IHL does not depend on reciprocity.

Why “knock-on-the-roof” warnings, telephone calls, SMS messages and leaflets do not alleviate Israel’s obligation not to target civilians and civilian infrastructure

While the attacking party to the conflict is obliged to take precautionary measures before carrying out attacks in order to spare civilians and civilian objects, this by no means negates the primary obligation not to make civilians and civilian objects the target of attack. In cases in which a building is civilian in nature, Israel’s policy of “knock-on-the-roof” warnings – a procedure in which it fires a small missile at the roof of a building to warn its occupants that a fully armed larger missile attack is imminent - does not transform that building or its occupants into legitimate military targets. Telephone calls, SMS messages and leaflets warning civilians of an imminent attack similarly cannot be considered to alter the individuals’ civilian character nor imply that civilian casualties resulting from such attacks are to be considered ‘human shields’. In addition, when providing warnings, attacking parties to the conflict must ensure that such warnings are meaningful in that they indicate where civilians can take shelter and how much time they have to evacuate the premises. Without such information the warning is rendered ineffective.

Furthermore, Israel’s “knock-on-the-roof” policy in itself has caused damage to civilian property, has injured and killed civilians and generates fear among the civilian population. In this regard, it should be emphasised that in all circumstances it is the attacking party that must to do everything possible to verify that the objective is indeed military and not civilian. In case of any doubt as to the identity of the object or persons, they must be assumed to be civilians; hence the attack must be aborted.

Under IHL, the principle of military necessity is the exclusive legal justification for any military operation. As such, belligerent parties must assess whether a military advantage will be gained as a result of an attack against legitimate military targets. Even if the proposed action does not violate other rules of IHL, attacks not intended to contribute to the enemy’s military defeat can never be justified by military necessity, because they serve no military purpose. Following from this definition, military action must be intended towards the military defeat of the opposing forces and must offer a direct contribution towards this goal.

Israel’s policy of urging Palestinians to evacuate their homes in whole neighbourhoods, leading to the displacement of tens of thousands of people, can only be justified if such action is essential for the attainment of legitimate goals, which are in themselves in line with the rules of IHL. If an attack is carried out and it transpires that there was no military advantage to be gained, then it may suggest that the motivation for the attack was to terrorise and forcibly displace the civilian population, in violation of IHL. During “Operation Protective Edge” Israel has issued fake warnings in which it informs families that their homes will be attacked without actually carrying out the attack. Such warnings instil fear into the civilian population of Gaza, unnecessarily contribute to the daily increase in displaced Palestinians and violate the prohibition included in the Fourth Geneva Convention against all measures of intimidation or terrorism.

The acceptance or rejection of any ceasefire proposal by either party to the conflict is a purely political decision and does not alter the obligation incumbent upon both Palestinian resistance groups and Israel to refrain from targeting civilians and civilian objects. In accordance with the Fourth Geneva Convention, no agreement between the parties to the conflict can adversely affect the situation of protected persons, i.e. the Palestinian population, nor restrict the rights conferred upon them by the Convention. Any ceasefire should be brokered under conditions that address the root cause of the current situation in the Gaza Strip and the West Bank, including East Jerusalem, and that seek to bring to an end the unlawful closure of the Gaza Strip and ensure Israeli compliance with its obligations under international law.

Why “Operation Protective Edge” must be viewed in the context of the 47 year-old occupation of the West Bank, including East Jerusalem and the Gaza Strip

Despite Israel’s unilateral ‘disengagement’ in 2005, the Gaza Strip remains under occupation, as affirmed by the International Committee of the Red Cross (ICRC), numerous states and UN bodies. Israel has repeatedly demonstrated that it meets the “effective control” threshold necessary for occupation through its ability to deploy troops into the Gaza Strip, its ability to make its authority felt in the territory and its continuing control over land borders, population registry, airspace and territorial sea.

As the Occupying Power, Israel is under a legal obligation to take all necessary measures to protect the civilian population of the occupied territory and to ensure that the human rights of the population therein are upheld. Israel’s illegal regime of closure imposed on the Gaza Strip since 2007 amounts to a form of collective punishment of the population of 1.8 million and has prevented full recovery from the devastation caused by “Operation Cast Lead” and “Operation Pillar of Defense”. The Gaza Strip is entirely surrounded by a concrete wall, a double wire fence, watchtowers and closed crossings and is subject to a naval blockade, allowing Israel to monitor and restrict the entry of goods and materials into the territory, including vital medicine and medical equipment. In the past year, the only departure point from the Gaza Strip, the Rafah border crossing with Egypt, has been frequently closed. These closures of the Rafah crossing, compounded by Israel’s ongoing closure of the territory, have resulted in electricity and fuel shortages.

This ongoing closure, combined with repeated cycles of violence, has a devastating impact on the population’s right to life, health, education, food, water and adequate standard of living – all of which Israel is obligated to provide for under IHRL. Import and export restrictions have severely stunted basic infrastructural development and recovery and have had a particularly negative impact on the agricultural and manufacturing sectors in Gaza. By the first quarter of 2014, this had translated into an unemployment rate of 40.8%.