Briefing Note VI: Unlawful Attacks against Paramedics and Ambulances and Delays in the Delivery of Aid

ATTACKS AND INTERFERENCE WITH AMBULANCES

i.Delays in the Delivery of Medical Aid

During ‘Operation Protective Edge’, Israel has significantly disrupted the delivery of aid and the evacuation of casualties. For example, Israeli forces delayed two Red Crescent ambulances carrying 10 paramedics, along with two other Red Cross ambulances carrying two people, for two hours from entering Khuza’a for the purpose of evacuating casualties. The ambulances had secured coordination ahead of time.[2] Meanwhile, on 22 July 2014, Al-Haq field researchers documented an incident in al-Shawka where Israeli forces refused to coordinate ambulances for a period of six hours, leaving four injured civilians to bleed to death. Similarly, on 25 July, Al-Haq documented two separate incidents in Khan Younis Governorate where Israeli forces prevented ambulances from reaching two wounded men resulting in their deaths.[3]

ii. Attacks on Ambulances and the Killing of Paramedics

Over the past weeks Israel has directly targeted ambulances and paramedics. Such attacks have resulted in the killing of and injury to numerous paramedics.

On 20 July, at approximately 10.00 a.m., an ambulance entering the Shuja’iyya neighbourhood to evacuate the injured and dead during a lull in hostilities was targeted in an airstrike, killing 27-year old paramedic Fu’ad Jaber. On 23 July, artillery shells hit two ambulances that were travelling to Beit Hanoun Crossing to recover bodies, injuring the paramedics.[4] On the same day, Israeli forces situated southeast of Khuza’a fired artillery shells at hundreds of people fleeing their homes, also hitting ambulances there.[5]

Furthermore, Al-Haq’s field research team documented a grave series of attacks on ambulances in the North Gaza Governorate. On 25 July, at approximately 4.30 p.m., an artillery shell struck a Red Crescent ambulance on its way to recover the wounded in al-Masriyin Street in Beit Hanoun. One paramedic was killed, and another two were injured. Following coordination through the Red Cross, another ambulance was sent to recover the paramedic's body. That ambulance was shot at, injuring another paramedic and damaging the ambulance.[6] Later that night, Israeli forces opened fire at a Red Crescent ambulance in al-Qarara, injuring a paramedic. In that instance the Red Cross had coordinated for the ambulance to enter the area.[7]

Israel has also damaged ambulances as a result of its attacks on nearby objectives. The collateral damage caused raises serious doubt about Israel’s adherence to the IHL principle of precaution which dictates that Israel must take all feasible precautions “to avoid, an in any event to minimize […] damage to civilian objects”,[8] as well as to “do everything feasible to verify that targets are military objectives”.[9]

On 9 July, Al-Haq’s field research team documented an air strike on agricultural land near the Palestinian Red Cross, damaging three ambulances and injuring paramedics.[10]Meanwhile, on 24 July, three ambulances were damaged when a missile struck and destroyed a house in Jabaliyya refugee camp.[11]On 2 August, an ambulance was struck in the midst of heavy shelling and airstrikes in the Misbeh neighbourhood of Rafah, killing three paramedics; Atef al-Zamali, Yusef al-Zamali, and Yusef Drabih.[12]

i.Delay and the Inviolability of the Wounded and Sick

Article 12 of the First Geneva Convention provides the general principle on the inviolability of the wounded and sick who are to be respected and protected in all circumstances.[13]Article 12 applies to combatants as well as non-combatants and civilians.[14]Furthermore, Article 16 of the Fourth Geneva Convention establishes that the “wounded and sick, as well as the infirm, and expectant mothers, shall be the object of particular protection and respect”.[15]As such, international humanitarian law obliges Israel to ensure that wounded combatants, non-combatants and civilians, including civilian paramedics, are respected and protected in all circumstances.

Delays in the delivery of aid to the wounded and the sick during ‘Operation Protective Edge’ have resulted in Palestinians dying from their injuries. Albeit delays may be warranted in situations of suspicion of perfidy or for legitimate security concerns,[16] there is no legitimate justification for Israeli forces hindering ambulances from reaching injured Palestinians in the cases cited above.  The lack of legitimate justification for delaying the delivery of aid is particularly evident when prior security coordination has taken place.

In killing wounded and sick Palestinians by denying them the aid that would have saved them, Israel may can be considered to have committed the grave breach of wilful killing of the Geneva Conventions.[17]

Direct Attacks against Ambulances and Paramedics 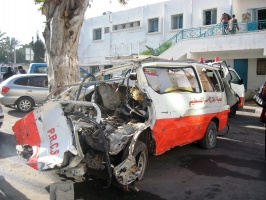 Israel is absolutely prohibited from targeting ambulances and paramedics engaged in medical duties. Article 19 of the First Geneva Convention emphasizes that fixed establishments and mobile units “may in no circumstances be attacked” and that they shall be “respected”, the latter meaning they shall not be harmed or attacked in any way.[18] Article 22(5) of the First Geneva Convention, extends the humanitarian activities of medical units and establishments to the care of civilian wounded and sick.[19]

Paramedics that fall within the definition of medical personnel belonging to “National Red Cross or Red Crescent Societies and other voluntary aid societies duly recognized and authorized by a party to the conflict, including the ICRC” must be protected in all instances.[20] Other persons, including persons that are not members of the armed forces or assigned by a party to the conflict as medical personnel, are to be considered civilians unless they are actively participating in hostilities.[21] In accordance with the principle of distinction, Israel must not direct its attacks against civilians.[22]

By targeting ambulances carrying paramedics tending to the medical needs of the wounded and the sick and as a result killing the paramedics, Israel has violated its obligation to protect medical personnel and civilians. Israel’s attacks against paramedics in the cases described above amount to wilful killing as a grave breach of the Geneva Conventions. Moreover, there is some evidence from the nature of the targeted areas, that ambulances and paramedics were subjected to ‘follow-up’ attacks, where the same site is repeatedly attacked. These attacks are of grave concern as they are designed to delay the treatment and evacuation of wounded victims in the area and form part of military strategy.[23]

The Destruction of Ambulances and Collateral Damage

The airstrike on agricultural land located near the Palestinian Red Cross on 9 July 2014 resulted in disproportionate collateral damage to three nearby ambulances, injuring tens of paramedics.[24] Article 19 of the First Geneva Convention provides the general rule that “fixed establishments and mobile medical units of the Medical Service may in no circumstances be attacked, but shall at all times be respected and protected by the Parties to the conflict”.[25]  Furthermore, the core international humanitarian law principles of distinction, proportionality and precaution, require that Israel distinguish between legitimate civilian objects and military objectives.[26]While agricultural land that is considered a legitimate military objective may be destroyed, the destruction must not be excessive in relation to the concrete and direct military advantage anticipated.[27]Hence, whereas hospital or mobile units may be endangered due to their proximity to a military objective,[28] the location of the Palestine Red Cross is well established and there is no evidence that Israel issued a warning for the purpose of safeguarding ambulances and paramedics prior to the attack. As such, Israel did not undertake the requisite precautionary measures in planning the attack.[29]In addition, the large number of destroyed ambulances illustrates Israel’s failure to comply core international humanitarian law principles.

[18] Article 19, First Geneva Convention (1949); Commentary, Article 19, Chapter III: Medical Units and Establishments, Convention (1) for the Amelioration of the Condition of the Wounded and Sick in Armed Forces in the Field (Geneva, 12 August 1949).

[28] Article 19, First Geneva Convention (1949); Commentary, Article 19, Chapter III, Medical Units and Establishments, Convention (I) for the Amelioration of the Condition of the Wounded and Sick in Armed Forces in the Field. Geneva, 12 August 1949.<http://www.icrc.org/applic/ihl/ihl.nsf/Comment.xsp?viewComments=LookUpCOMART&articleUNID=D8F87DF50E554BC2C12563CD0051A030> accessed 13 August 2014.