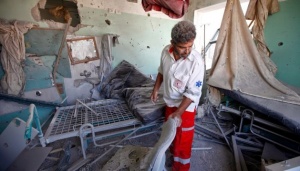 Throughout Operation Protective Edge, there has been a disproportionate amount of attacks on civilian hospitals and health facilities. In a statement, the International Committee of the Red Cross (ICRC) commented that it was “appalled by the damage caused to hospitals and branch offices, as well as to the property of the Palestinian Red Crescent”.[1]

The Al-Haq Briefing Note Special Series will address select aspects of Israel’s conduct in the ongoing hostilities in the Gaza Strip. In particular, this Special Series will apply the framework of international humanitarian law to Israeli acts and omissions. As an Occupying Power engaged in hostilities, Israel must abide by its obligations under international humanitarian law (IHL), which are set out primarily in the Regulations Annexed to the 1907 Hague Convention respecting the Laws and Customs of War on Land (Hague Regulations) and the Fourth Geneva Convention of 1949; both are largely reflective of customary international law.

During the recent hostilities Israel damaged at least 15 hospitals and 16 public health clinics.[2] On 12 July 2014, the Al-Rahma Association for the Disabled, was struck by a missile, killing two disabled persons and injuring others.[3] The following week, Al-Shifa Hospital in Rafah was struck in an aerial attack and Beit Hanoun Governmental Hospital was hit by a missile, causing damage to the building. On Monday 21 July, Israeli tanks situated in the eastern buffer zone fired at least four artillery shells at Shuhada’ Al-Aqsa Hospital in Deir al-Balah, causing extensive damage to the building and two ambulances outside. The attack against Shuhada’ Al-Aqsa Hospital resulted in the killing of three civilians, including one child. Approximately another 40 people were injured and most of them were patients.[4] According to Al-Haq’s field researchers in Gaza, the shelling took place without prior warning.[5]

Following heavy artillery shelling of hospitals and health facilities located in the North Gaza Governorate, the Palestinian Ministry of Health decided to evacuate and close Beit Hanun Governmental Hospital. The hospital was later shelled on four separate occasions.[6] For example, on 25 July at approximately 11.00 p.m, dozens of artillery shells struck Beit Hanun Hospital for several hours, damaging the upper floor as well as the surgical and women's units. Three workers were injured during the shelling.[7]

Similarly, on 24 July at 3.10 p.m., two artillery shells struck the second floor of Balsam Hospital in Beit Hanun, causing damage to the surgical unit.[8] Later that day at around 7.30 p.m., dozens of artillery shells struck and damaged the premises of al-Durra Hospital in al-Tuffah. During this attack, two-year old Ibrahim Omar was killed and another 30 people were injured. Ibrahim was receiving medical treatment in the ICU.[9] On 1 August, Abu Yusuf al-Najjar Hospital was shelled in Rafah. A number of civilians were injured despite evacuation orders by Israeli forces.[10] The Palestine Red Crescent Society reported that Al Quds Hospital in Tal Al Hawa and Khalil Al Wazer Clinic in Sheik Ajleen in Gaza city had been targeted in an Israeli strike on August 2, resulting in damage to and destruction of hospital equipment. Al Quds hospital and clinic clearly displayed the Red Crescent emblem at the time of the attack.[11]

i. Targeting of Civilian Hospitals

In considering the obligation “to spare as far as possible, hospitals and other places”, a distinction may be drawn between the use of hospitals to house troops and military offices, which would serve a legitimate military purpose, and the use of hospitals to treat wounded combatants and civilians, which by contrast serve a humanitarian purpose.[16] “The fact that sick or wounded members of the armed forces are nursed in these hospitals, or the presence of small arms and ammunition taken from such combatants and not yet handed to the proper service, shall not be considered to be acts harmful to the enemy” and thus such a hospital may not be the subject of attack.[17] Combatants wounded in hospitals must be respected and protected within the context of Article 12 of the First Geneva Convention.[18] Significantly, there is a customary international law prohibition on attacks against persons who are hors de combat and defenseless on the basis of unconsciousness, wounds or sickness.[19] In any case, the protection afforded to hospitals may not cease unless “due warning has been given, naming, in all appropriate cases, a reasonable time limit, and after such warning has remained unheeded.”[20]

Israeli attacks against hospitals in the Gaza Strip are not justifiable under international humanitarian law. Many hospitals, such as Al Aqsa hospital in Deir al-Balah, were shelled without prior warning resulting in massive civilian casualties. Moreover, while doctors at Abu Yusef al-Najar hospital did receive prior warning, there was not sufficient time to evacuate the hospital fully and as a result numerous civilians were killed. In general, the excessive number of civilian casualties, including approximately 40 civilians injured in the shelling of Al Aqsa hospital and 30 civilians injured at al-Durra hospital, indicate that Israel did not comply with the principle of proportionality. [21]

Hospitals featuring distinctive emblems have been targeted during ‘Operation Protective Edge’. The property of civilian hospitals marked by the Red Crescent emblem, governed by Article 38 of the First Geneva Convention, or black and white triangles, according to Article 5(2) of Hague Convention IX,[23] must not be the target of attack.[24] Reports that the Al Quds Hospital in Tal Al Hawa was targeted despite having displayed the prominent Red Crescent emblem indicates that Israel violated the principle of distinction and as such unlawfully attacked it.[25]

Attacks against hospitals and health facilities have been compounded by already dire conditions imposed on medical facilities by the siege. This has made it extremely difficult, if not impossible, for the medical community to tend to the medical needs of the occupied population. Hospitals and health facilities have endured disruptions to water supplies, sanitation, electricity and fuel. The destruction of the Gaza Power plant alone has resulted in power outages of up to twelve hours per day.[27] Israel, as an Occupying Power, is obligated “to the fullest extent of the means available to it” to supply the necessary minimum amounts of food and medical supplies for the maintenance of public health facilities and hospitals.[28] Moreover, Article 14(1) of Additional Protocol 1, establishes that the belligerent occupant has a “duty to ensure that the medical needs of the civilian population in occupied territory continue to be satisfied”.[29] The occupant must ensure the continuance of medical needs without qualification.[30] As such, Israel must permit the free and rapid passage of all consignments of medical and hospital stores into the Gaza Strip necessary for the civilian population.[31]

[10] Palestinian Center for Human Rights, ‘Heinous Crimes against Humanity, On the 26th Day of the Israeli Offensive: Massacre in Rafah, Most Violent Since the Beginning of the Offensive; Rafah Isolated and Unprecedented War Crimes Committed’ (2 August 2014) <http://www.pchrgaza.org/portal/en/index.php?option=com_content&view=article&id=10560:heinous-crimes-against-humanity-on-the-26th-day-of-the-israeli-offensive-massacre-in-rafah-most-violent-since-the-beginning-of-the-offensive-rafah-isolated-and-unprecedented-war-crimes-committed&catid=131:new> accessed 8 August 2014

[18] Article 12, First Geneva Convention (1949); There is an obligation on the party to the conflict to treat the wounded and sick humanely. Accordingly, Pictet suggests that the obligation to respect and protect, derive from the authoritative French version ‘respecter’ or “to spare, not to attack” and 'protéger' which translates "to come to someone's defence, to lend help and support". Commentary, Article 12, Chapter II, Wounded and Sick, Convention (I) for the Amelioration of the Condition of the Wounded and Sick in Armed Forces in the Field. Geneva, 12 August 1949. <http://www.icrc.org/applic/ihl/ihl.nsf/Comment.xsp?viewComments=LookUpCOMART&articleUNID=B97B83DC12AC4998C12563CD00519F56> accessed 12 August 2014

[22] Article 11, Convention on the Rights of Persons with Disabilities