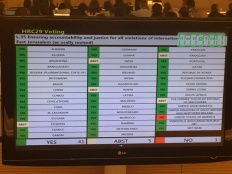 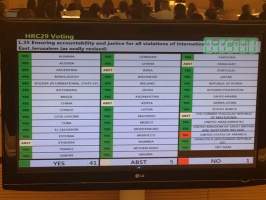 On 3 July 2015, the Human Rights Council adopted an unprecedented resolution with unanimous support from the EU calling on Israel and Palestine to "cooperate fully with the preliminary examination of the International Criminal Court and with any subsequent investigation that may be opened". The Council resolution entitled "Ensuring accountability and justice for all violations of international law in the Occupied Palestinian Territory, including East Jerusalem," welcomes the report of the UN-established Commission of Inquiry on the 2014 Gaza Conflict (CoI) and calls on "all duty bearers and the United Nations bodies to pursue the implementation of all recommendations" of the report. The Council members also expressed grave concern “by reports regarding serious human rights violations and grave breaches of international humanitarian law, including possible war crimes”.

The resolution further calls on the UN High Commissioner for Human Rights to present a report on the implementation of the present resolution; on the recommendations of the CoI report; and the report of the 2009 UN Fact-Finding Mission on the Gaza Conflict.

EU consensus on the accountability-centred resolution is unprecedented. This positive development follows repeated calls by civil society organisations in Palestine and elsewhere that perpetrators of international human rights and humanitarian law violations, in particular international crimes, in the Occupied Palestinian Territory should be held to account.

The overwhelming support of 41 members of the Human Rights Council represents an encouraging step towards ending impunity. It furthermore represents growing awareness and concern about the apparent failure of domestic Israeli investigative mechanism to comply with international standards and pursue the higher military and political echelon.

In the words of the High Commissioner on Human Rights during this Council session, Palestinians need a reconstruction of hope. Al-Haq considers the passing of this resolution with strong EU support to be a building block in this reconstruction of hope - hope that impunity will not prevail and that political agendas may not override justice and human rights.