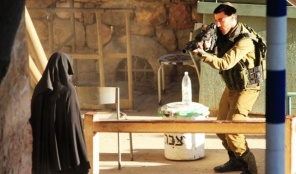 The following article was published on 15 October 2015 on Mondoweiss

If you are Palestinian, expect to be killed by Israeli forces at any time, even if you are an Israeli citizen. Reasons for the killing are not important. It is enough to be Palestinian in order for soldiers or police to feel that your death is trivial, especially considering that individuals are rarely, if ever, held accountable. To justify the killing, members of the Israeli forces may simply claim that the attacker tried to stab someone. Claims are not disputed by their superiors or anyone in government, irrespective of evidence to the contrary provided by human rights organizations, including international ones.

Attacking someone with a knife can be dangerous. However, in most of the recent cases in which Palestinians were killed, lives were not under immediate threat, justifying the use of lethal force. Under the UN Code of Conduct for Law Enforcement Officials of 1979: "[T]he use of firearms is considered an extreme measure. Every effort should be made to exclude the use of firearms." The UN Basic Principles on the Use of Force and Firearms by Law Enforcement Officials similarly affirm, "intentional lethal use of firearms may only be made when strictly unavoidable in order to protect life." Accordingly, the extrajudicial killings, like the ones regularly taking place against Palestinians, are in violation of international standards.

On Friday, 9 October 2015, 29-year old Isra' 'Abed from Nazareth was killed by Israeli police at Al-Affoulah bus station in Israel. After the killing, footage emerged showing Isra' holding an object in her hand while surrounded by heavily armed police, who then shot at her repeatedly. A few days earlier, a video showed 19-year-old Fadi Alloun being chased by Israeli settlers and then killed by police in Jerusalem. In both videos it was clear that neither Isra' nor Fadi posed an imminent threat to the lives around them at the time of their killing. Fadi was attempting to escape from settlers who were taunting him, and was apparently seeking the protection of the police when he was killed. Isra' was pointing an object at the group of police from a distance.

In both videos, it is clear that lethal force was not necessary to control the suspect. Notably, no other means to apprehend were used before their killing.

Other examples of Palestinians killed by Israeli forces after they allegedly tried to stab soldiers include: the case of 21-year-old Anas Taha who was killed on 9 August 2015 near the village of Kharbatha Al-Mesbah in Ramallah; the case of 25-year-old Muhammad Amshah from Kufr Ra'i in Jenin who was shot dead at a checkpoint north of the West Bank city of Nablus on 17 August 2015; and the case of a 19-year-old woman named Hadil Al-Hashlamon who was killed on 22 September 2015 at a checkpoint called "56" in Hebron. Unfortunately, this list goes on.

According to Al-Haq's investigations, in none of the above mentioned cases did the alleged attackers pose an imminent threat to the lives of the soldiers or other individuals in the area. Except in the case of Anas Taha who had attacked a settler and caused him light injuries, no one was injured. Even in this case, Anas was shot dead by soldiers who came to the area approximately ten minutes after the attack had taken place. They shot him dead from a distance while he was sitting on the ground and pointing the knife he used toward the sky. In all cases, suspects could have been easily controlled and arrested by the well-equipped Israeli soldiers or police.

In contrast to the treatment of Palestinian suspects is that of Israeli Jews who carry out attacks against civilians. On 9 October, an Israeli stabbed four Palestinian workers in Dimona, a town in southern Israel. Two of them sustained moderate injuries while the others suffered minor injuries. The attacker was arrested by the police. Based on past experience, perpetrators of such crimes against Palestinians receive very lenient, if any, sentences. The murders of the Palestinian Dawabsheh family, for example, are known to the Israeli military but according to Moshe Ya'lon, Israeli Minster of Defence, they were not arrested in order to protect the military's source of information.

On 30 July 2015 an extremist Israeli Jew, Yeshai Shlissel, stabbed six persons during a gay pride parade organized in Jerusalem. Two of the six were seriously injured, and one died from her wounds a day later. Israeli police controlled the attacker and arrested him. Notably, the attacker had just been released from jail, after serving a sentence for stabbing individuals at a gay pride parade 10 years prior.

The common denominator among Isra', Fadi, Anas, Muhammad and Hadil is that they are all Palestinians. Even Isra', who holds an Israeli citizenship, is Palestinian. Yeshai and the other attacker in Dimona are both Jews.

It has become clear that Israel is operating under a practice of shoot to kill Palestinians and ask no questions later. The murder of Palestinians is justified with the simple unfounded claim that he or she attacked using a knife. More broadly, when Palestinians are killed at protests, in their homes in Gaza, or on the street by Israeli forces (all of which we have seen in the past two weeks), there is rarely a transparent and impartial investigation as to whether the killing was legitimate.