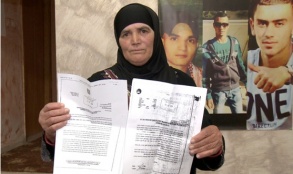 Our organizations[1] express deep concern regarding the recent Israeli judicial policy of imposing excessive criminal sentences targeting Palestinian youth in Occupied East Jerusalem. This policy should be seen within the larger context of other oppressive measures aimed at creating conditions for transfer and collectively punishing Palestinian Jerusalemites for any acts of dissent against Israeli colonial policies.

Our organizations are particularly alarmed about the recent sentencing of young Jerusalemite Abed Dwayat, 20, for 18 years of imprisonment for stone throwing. During 2015, the Israeli government adopted a series of punitive measures, which included excessive sentences targeting stone-throwers and their families.[2] The policy set a minimum sentence of four years and a maximum punishment of 20 years for those convicted. The policy is coupled with other punitive measures including the revocation of residency rights, denial of family unification, punitive house demolitions, and property confiscation. The harsh conditions that Jerusalemites are subjected to call for urgent attention from the international community, and require concrete action to put an end to the serious violations of basic humanitarian and human rights committed against Palestinians.

Abed Dwayat and two others were charged on 15 October 2015 with manslaughter, stone throwing at a vehicle, and the infliction of severe injury. Dwayat was accused of throwing stones with four others at an Israeli vehicle near Sur Baher on 13 September 2015, which allegedly led to a car accident in which the driver died. On 21 November 2016, Abed Dwayat’s attorney was compelled to sign a plea bargain with the Israeli prosecution for 18 years of prison. Israeli prosecutor Lizu Wolfus described the sentence of Dwayat as unprecedented and as “the gravest [sentence] given to someone convicted of manslaughter using a rock.”[3]

Abed’s sentence follows a series of other punitive measures targeting him and his family.[4] On 11 April 2016, Abed’s family house in Sur Baher neighborhood was sealed and effectively confiscated leaving his mother and sister homeless. In addition, Abed’s right to continue residing in Jerusalem was revoked on 19 January 2016 on the ground of “breach of allegiance” to the state of Israel.[5]

The excessive nature of Israel’s imprisonment policy for stone-throwers is likely to violate international standards, as punishments may be imposed after conviction in a fair trial and must be proportional to the seriousness of the crime.[6] Moreover, the revocation of residency rights violates Article 49 of the Fourth Geneva Convention on forcible transfer as well as customary international law provisions requiring states not to render individuals stateless.[7] While Israel basis the revocation on “breach of allegiance”, under international humanitarian law the protected population in the occupied territory does not have a duty of allegiance to the occupying power.[8] Further, the sealing of Abed’s house constitutes an act of collective punishment as it targets his family. Between July 2014 and January 2017, Israel punitively sealed 4 homes and punitively demolished 6 homes in East Jerusalem. Article 33 of the Fourth Geneva Convention absolutely prohibits collective penalties and measures of intimidation against protected persons and their property “for an offence [they have] not personally committed.”

Beyond the individual and collective punishment aspects of such administrative Israeli decisions, these punitive measures are part of a general Israeli policy aimed at forcibly displacing Palestinians from Jerusalem. The forcible transfer of a protected population is a grave breach of the Fourth Geneva Convention, and accordingly may amount to a war crime and a crime against humanity under the statute of the International Criminal Court.

[4]The two others, Waleed Atrash and Mohammad Abu Kaf, also had their residency punitively revoked. They are still awaiting judgment.

[7]Article 8 of Convention on the Reduction of Statelessness.

[8] Article 68(3) of the Fourth Geneva Convention and Article 45 of the Hague Regulations.