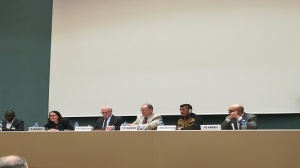 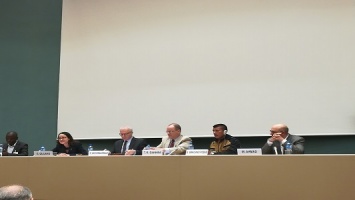 The three-day event provided an open platform for stakeholders to discuss business and human rights issues, with a specific focus on access to an effective remedy. On 27 Nov 2017, Al-Haq participated in a parallel session “Exploring elements of effective remedy: Victims’ perspectives concerning effective remedy (case studies),” and highlighted how States and corporations violate human rights in the context of colonialism and occupation. Al-Haq presented the case of Riwal, a Dutch company, which profited from Israel’s construction of the Annexation Wall and settlements in the OPT. While a complaint was lodged against Lima Holding, Riwal’s parent company, the case was ultimately dismissed by the Dutch Public Prosecutor. Within the context of the Forum, Al-Haq shared other information on corporate complicity with the occupation, including by highlighting its “Facts on the Ground” campaign on the exploitation of Palestinian natural resources by Israeli and foreign businesses, and the applicability of the UN Guiding Principles on Business and Human Rights in the case of Occupation.

Al-Haq, in conjunction with WhoProfits, Diakonia International Humanitarian Law Resource Center (IHLRC), and BADIL Resource Center organized a panel discussion on 27 November entitled “Private Corporations and Violations of Palestinian Human Rights.” During the presentation, Al-Haq focused on Israel’s exploitation of Palestinian natural resources and its impact on the lives and livelihoods of Palestinians.