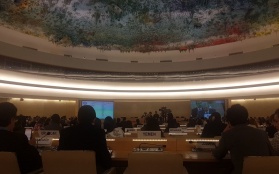 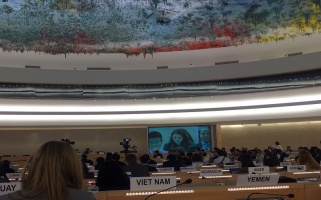 Since 30 March 2018, the Israeli occupying forces have shot and killed 117 Palestinians in the Gaza Strip, escalating its assaults on Palestinians there and suppressing the peaceful Great Return March demonstrations.[1] During the same period, over 7,000 Palestinians were injured by Israeli forces as they shot at unarmed protesters, at times with deliberate intention to seriously injure and maim Palestinians.[2] For eight weeks, repeated calls on Israel to abide by its obligations under international law went unheeded as Israeli forces continued to brutally and violently suppress the Great Return March, notably on 14 May 2018, killing and seriously injuring demonstrators as they continued to demand the realisation of their rights, calling for an end to Israel’s unlawful 11-year closure of the Gaza Strip, and the realisation of Palestinian refugees’ right of return, as mandated by international law and systematically denied by Israel since the Nakba.

In this context, and as the Great Return March continues in Gaza, the United Nations (UN) Human Rights Council met in its 28th special session on the deteriorating human rights situation in the occupied Palestinian territory, including East Jerusalem on Friday, 18 May 2018. Ahead of the session, 95 civil society organisations had called on the Council to urgently launch a commission of inquiry to investigate violence against Palestinian protesters over the past eight weeks.[3] 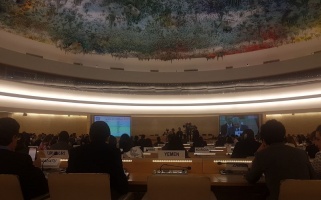 In opening the 28th special session, the UN High Commissioner for Human Rights, Mr Zeid Ra’ad Al Hussein stressed that Palestinians have the right “to live safely in their homes, in freedom, with adequate and essential services and opportunities. And of this essential core of entitlements due to every human being, they are systematically deprived.” In his opening remarks, the High Commissioner urged “Israel to act in accordance with its international obligations”, calling on the Israeli authorities to publish their rules of engagement for the use of live fire and to ensure that “lethal force may only be used in cases of extreme necessity, as a last resort, in response to an imminent threat of death or risk of serious injury.”[4]

In an impassionate appeal to the Council, Professor Michael Lynk, UN Special Rapporteur on the situation of human rights in the Palestinian Territory occupied since 1967, referred to Gaza’s peaceful protesters as “armed with the oldest and most human of aspirations: to live free in one’s own land.” In a video statement delivered to the Council on behalf of the Coordination Committee of the Special Procedures, Professor Lynk stated that “[t]he events in Gaza this past week, and these past two months, and these past eleven years, haunt the conscience of the international community”, adding:

“This is a profoundly asymmetrical situation. Thousands of unarmed demonstrators, shorn of hope, but marching with dignity, living in one of the poorest societies of the region, up against the most powerful military and economically advance society in the region. Israel has been exacting an eye for an eyelash, because it can. Any condemnation of these recent events would be empty unless it is accompanied by the pursuit of justice and accountability. Accordingly, I call upon the international community, through the United Nations, to conduct an independent and impartial investigation into the killings and injuries that have occurred in the context of these demonstrations since 30 March.”

In statements delivered to the Council by civil society, Palestinian human rights organisations echoed calls for accountability, including through an independent and transparent investigation into the events in Gaza and the opening of a full investigation by the International Criminal Court into the situation in the occupied Palestinian territory as a whole. Al-Haq delivered a joint oral intervention under the general debate of the 28th special session, together with Al Mezan Centre for Human Rights, Adalah – The Legal Center for Arab Minority Rights in Israel, the Palestinian Center for Human Rights (PCHR), Cairo Institute for Human Rights Studies (CIHRS), and BADIL Resource Center for Palestinian Residency and Refugee Rights.

In their joint statement, Al-Haq, Al-Mezan, PCHR, CIHRS, and BADIL condemned Israel’s longstanding impunity for war crimes committed by the Israeli occupying forces and “[s]hoot-to-kill orders … issued at the highest levels of the Israeli military, reflecting Israel’s longstanding disregard for Palestinian life”. The five human rights organisations “call[ed] for an independent, transparent, and effective investigation and accountability for violations and suspected crimes committed during the Great Return March, within the scope of the rights of the demonstrators, including to life, to freedom of assembly and expression, and to return, which Israel has sought to suppress for eight weeks in Gaza, and ever since the Nakba.”

Al-Haq Welcomes Adoption of Draft Resolution A/HRC/S-28/L.1 Calling for the Establishment of a Commission of Inquiry

At the close of the 28th special session, member States of the UN Human Rights Council adopted by 29 votes in favour, two votes against, and 14 abstentions draft resolution A/HRC/S-28/L.1 calling for the establishment of a commission of inquiry into the situation in Palestine, and particularly the events in the Gaza Strip since 30 March. Paragraph 4 of draft resolution A/HRC/S-28/L.1 decides to:

“urgently dispatch an independent, international commission of inquiry, to be appointed by the President of the Human Rights Council, to investigate all violations of international humanitarian law and international human rights law in the Occupied Palestinian Territory, including East Jerusalem, particularly in the occupied Gaza Strip, in the context of the military assaults on the large-scale civilian protests that began on 30 March 2018, whether before, during or after, to establish the facts and circumstances, with assistance from relevant experts and special procedure mandate holders, of the alleged violations and abuses, including those that may amount to war crimes, to identify those responsible, to make recommendations, in particular on accountability measures, all with a view to avoiding and ending impunity and ensuring legal accountability, including individual criminal and command responsibility, for such violations, and on protecting civilians against any further assaults, and to present an oral update to the Council at its thirty-ninth session and a final, written report at its fortieth session” (emphases added).[5]

Al-Haq commends the 29 States that voted in favour of this resolution on Friday, 18 May, in particular in relation to “protecting civilians against any further assaults” by the Israeli occupying forces in Gaza. Nevertheless, Al-Haq strongly condemns the two votes against by the United States of America, notably following the unlawful relocation of its embassy to Jerusalem last Monday, and Australia, which constitute efforts to undermine accountability and the pursuit of justice for Israeli violations in the occupied Palestinian territory. Al-Haq further condemns the 14 abstentions to the resolution, including by Switzerland, as depository of the four Geneva Conventions, despite serious allegations of the commission of grave breaches as warned by the Office of the Prosecutor of the International Criminal Court,[6] the UN High Commissioner for Human Rights,[7] and UN human rights experts.[8]

Al-Haq hopes that this resolution will open the way towards a strong mechanism for accountability given Israel’s widespread and systematic violations of the rights of Palestinians. In light of Israel’s longstanding impunity, justice is urgently needed to ensure Palestinian victims are guaranteed their right to an effective remedy and to ensure non-repetition of these violations, including those amounting to international crimes.

While Al-Haq supports the establishment of a commission of inquiry into the Israeli occupying forces’ excessive, unnecessary, and intentional use of lethal force during the Great Return March, it is deeply concerned that States will once again attempt to water down any efforts towards ensuring actual accountability, given the failure of previous UN commissions of inquiry and fact-finding missions in holding Israeli perpetrators to account. Al-Haq therefore calls on the International Criminal Court to immediately and urgently open a full investigation into the situation in Palestine, to prosecute all allegations of war crimes and crimes against humanity, including those committed during the Great Return March, and to pierce the longstanding impunity Israel has been allowed to enjoy under the watchful eye of the international community.

[3] Al-Haq, “Enough is Enough: 95 civil society organizations call on the Human Rights Council to urgently launch a ‘Commission of Inquiry’ to investigate violence against protesters in Palestine” (17 May 2018), available at: http://www.alhaq.org/advocacy/topics/gaza/1252-enough-is-enough-95-civil-society-organizations-call-on-the-human-rights-council-to-urgently-launch-a-commission-of-inquiry-to-investigate-violence-against-protesters-in-palestine.