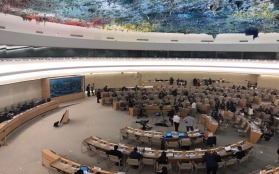 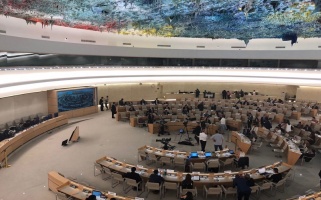 Al-Haq attended the 38th regular session of the United Nations (UN) Human Rights Council, which was held from 18 June to 6 July 2018, and submitted two written statements, delivered five oral interventions, participated in two side events, and attended meetings with diplomatic missions and civil society in Geneva.

Ahead of the 38th regular session, Al-Haq submitted a joint written submission together with BADIL Resource Center for Palestinian Residency and Refugee Rights, titled: “Seven Decades of Impunity: The United Nations Human Rights Council Must Hold Israel to Account”. Al-Haq also contributed to a written submission by Al Mezan Centre for Human Rights and endorsed by the Civic Coalition for Palestinian Rights in Jerusalem (CCPRJ), titled “Israel Entrenches its Illegal Annexation of Jerusalem and the Forcible Transfer of Palestinians”.

In the first written submission, Al-Haq and BADIL underlined Israel’s efforts to remove item 7 on “the human rights situation in Palestine and other occupied Arab territories” from the agenda of the Human Rights Council’s regular session and to prevent the public release of the database of businesses operating in and with Israeli settlements, noting that this formed “part of a wider Israeli attempt to silence Palestinians, to deny them the realisation of their inalienable rights, and to entrench Israel’s prolonged occupation of the Palestinian territory.”[1] The two organisations called for accountability and an end to Israel’s impunity, through support for item 7, the release of the UN database, and an effective investigation by the commission of inquiry established into violations and suspected crimes committed during the Great Return March in the Gaza Strip.

In the second written submission, Al-Haq joined Al Mezan and CCPRJ in addressing the ongoing plight of Palestinians in Jerusalem,[2] calling on the member States of the Human Rights Council to “[r]efrain from directly or indirectly recognizing, or assisting Israel’s practices of unlawful annexation of Jerusalem” and to take effective steps, as third States, to bring Israel’s 51-year occupation, including of East Jerusalem, and the annexation of the city of Jerusalem as a whole to and end.

On 22 June 2018, Al-Haq delivered an oral intervention during the annual full-day discussion on the human rights of women, highlighting the various forms of violence, including online violence, intimidation, and harassment to which Palestinian women human rights defenders are subjected as a result of their role in challenging Israel’s prolonged occupation of the Palestinian territory. Al-Haq’s own Nada Kiswanson has been subjected to waves of violence and intimidation, threatening her life and right to privacy if she does not stop her work. In the statement, Al-Haq called for the protection of Palestinian human rights defenders and highlighted such attacks as a key indicator of Israel’s shrinking space for civil society and systematic efforts to prevent Palestinians from seeking accountability.

In a joint oral intervention with BADIL delivered on 26 June 2018, Al-Haq drew attention to the forced displacement of Palestinians since 1948 during the panel discussion on the human rights of internally displaced persons in commemoration of the 20th anniversary of the Guiding Principles on Internal Displacement. Al-Haq and BADIL recalled that the Guiding Principles prohibit the arbitrary displacement of Palestinians, including displacement “based on policies of apartheid, “ethnic cleansing” or similar practices aimed at/or resulting in altering the ethnic, religious or racial composition of the affected population”[3] and as such “urge[d] the Council and experts in this field to support calls to the International Criminal Court to open an investigation into the situation in Palestine”.

On 29 June 2018, Al-Haq and BADIL delivered a joint oral intervention on Israel’s third Universal Periodic Review (UPR) outcome, in which only 8 of 101 recommendations on the human rights of Palestinians were fully supported by Israel. The two organisations condemned Israel’s refusal to attend the adoption of its third UPR outcome and deplored Israel’s engagement with the UPR as disingenuous and reflective of its long-term refusal to cooperate with UN human rights mechanisms.

Also on 29 June 2018, Cairo Institute for Human Rights Studies delivered a joint oral intervention on behalf of itself, Adalah – The Legal Center for Arab Minority Rights in Israel, Al-Haq, Al Mezan, and BADIL, in which the organizations jointly addressed the Council under Israel’s UPR outcome, condemning Israel for its continued failure to abide by international law and calling on the Human Rights Council to closely monitor the implementation of the UPR recommendations Israel has accepted.

On 2 July 2018, under agenda item 7, Al-Haq and Cairo Institute for Human Rights Studies delivered a joint oral intervention urging States to issue a full ban on Israeli settlement products in accordance with their responsibilities as third States under international law. Addressing the need to end Israel’s prolonged occupation of the Palestinian territory and corporate complicity therein, Al-Haq and Cairo Institute for Human Rights Studies called on the Office of the High Commissioner for Human Rights (OHCHR) to fully release the database of businesses active in or with illegal Israeli settlements.

Finally, also on 2 July 2018, Al-Haq and BADIL delivered a joint oral intervention under agenda item 9, during the interactive dialogue with the Special Rapporteur on racism, during which the two organisations deplored Israel’s institutionalised racism against Palestinians, whether as citizens, as refugees, or residents of East Jerusalem and the rest of the occupied Palestinian territory in a regime that may amount to the crime of apartheid. They called on the special rapporteur on racism to reflect the plight of Palestinians in her upcoming reports and to renew her request for a country visit, which Israel continues to deny. Al-Haq and BADIL further called on the Human Rights Council to finally take decisive action to bring Israel’s impunity to an end.

During the 38th regular session of the Human Rights Council, Al-Haq hosted and participated in a side event titled “The Great Return March: Marching for Dignity and Rights in the Gaza Strip”, focusing on Israel’s brutal suppression of the Great Return March in Gaza and the commission of wilful killings of Palestinians since 30 March 2018. Al-Haq was joined by Al Mezan Centre for Human Rights, who underlined the inhumane conditions in the Gaza Strip as a result of 11 years of prolonged closure, and Addameer, who challenged Israel’s prolonged occupation of the Palestinian territory more broadly. Moderating the panel discussion, BADIL addressed the need to realise Palestinian refugees’ right of return, 70 years since the Nakba, as one of the key demands voiced by Palestinians in Gaza during the Great Return March.

On 3 July 2018, Al-Haq further discussed its documentation of the Great Return March at a side event hosted by the Palestinian Return Centre, focusing on Israel’s deliberate targeting of health workers during the protests in the Gaza Strip and highlighting the killing of volunteer paramedic Razan Al-Najjar on 1 June 2018. Overall, Al-Haq called for an end to Israel’s impunity, the opening of an investigation by the International Criminal Court, and an effective investigation by the Human Rights Council into the violations and suspected crimes committed during the Great Return March in the Gaza Strip.

Meetings with Diplomatic Missions in Geneva

Finally, during meetings with diplomatic missions in Geneva, Al-Haq continued to advocate for the importance of maintaining item 7 on the agenda of the Human Rights Council, calling for accountability, including for corporate complicity in Israel’s occupation through the public release of the UN database on businesses active in Israeli settlements, and for violations in the Gaza Strip through an effective investigation into Israel’s suppression of the Great Return March, as mandated by the Council in its 28th special session in May. Finally, Al-Haq underlined that as Palestinians continue to be silenced and the human rights situation continues to deteriorate in the occupied Palestinian territory, the Human Rights Council, through item 7, remains one of the only avenues left for Palestinians to challenges Israel’s prolonged occupation on the international level. In this context, the removal of item 7 will only embolden Israel’s impunity and signal a green light for Israel to further entrench its colonial endeavour in Palestine.