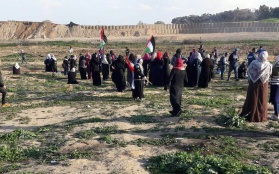 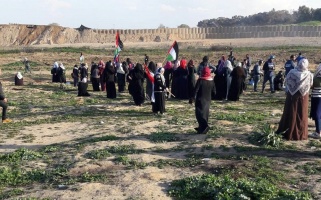 On Friday, 22 February 2019, the Great Return March continued for the 48th week. Between 2:00 pm and 5:30 pm, thousands of peaceful protesters gathered along the Gaza fence, calling for their right to return to their land and homes that they were forced to leave in 1948, and against Israel’s closure imposed on the Gaza strip for the past 12 years. Protesters, including women and children, from across all five governorates of the Gaza Strip raised flags and chanted national slogans. As usual, the protesters were met with excessive force by the Israeli Occupying Forces (IOF), situated behind the fence on bunkered hills. The IOF targeted protesters by firing live ammunition, rubber bullets, and tear gas canisters. The IOF’s attack on protesters along the Gaza fence resulted in the killing of 14-year-old Yousef Sai’d Al-Daya, and the injury of 118, including 17 children, eight women and one journalist. Of the 118, 54 were shot with live bullets, killing one and seriously injuring four.

Yousef Sa'id Al-Daya, born on 26 August 2004, was a student in tenth grade, who lived in Al-Zaytoun neighbourhood, east of Gaza City. At approximately 4:00 pm on Friday, Yousef was shot with a live bullet in the chest by the IOF while participating in the peaceful protest in the eastern part of Gaza City. Yousef was at least 200 metres away from the fence when he was shot. Medics from the Palestine Red Crescent rushed Yousef, who was in critical condition, to Al-Shifa Hospital in Gaza City. Doctors operated on Yousef but efforts to revive him failed. Yousef was pronounced dead at approximately 5:50 pm as a result of the injury he sustained from the bullet in the chest.

In the Central Governorate, hundreds of peaceful protesters, including women and children, gathered east of Al-Breij Refugee Camp. The IOF injured 11, eight of whom by live ammunition, and three others by gas canisters directly shot at them. One of the gas canisters struck a protester in the head. Tens of other protesters were treated for gas inhalation.

In the Rafah Governorate, hundreds of peaceful protesters, including women and children, gathered east of Rafah. The IOF fired live bullets and tear gas canisters at the protesters, wounding five, including one child. Of the five, two were injured by bullet shrapnel, while one was directly hit with a gas canister, whereas dozens others were treated for gas inhalation.