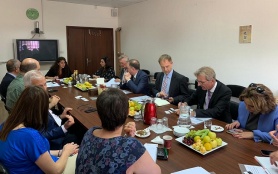 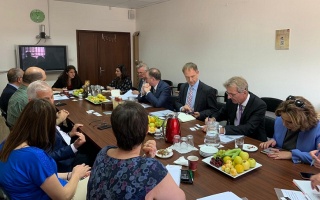 The meeting came in light of the recently adopted non legally binding motion at the German Bundestag, in May 2019, which dangerously conflates the Boycott, Divestment and Sanctions (BDS) movement with anti-Semitism. Palestinian civil society at the meeting raised their concerns and distress with the aforementioned motion, asserting that the call for an end to the prolonged military occupation of the Palestinian territory, freedom and justice and seeking accountability must not be framed as anti-Semitic. Representatives from Palestinian civil society present at the meeting also reiterated their position that such resolution contradicts principles of international law, particularly the right to freedom of expression, opinion and association, Germany's obligations as a third State party, and further reduces the already shrinking space for civil society working on Palestinian rights.

The Minister of State, Mr. Niels Annen, expressed his enthusiasm to have direct discussions with Palestinian civil society, especially considering recent developments in Germany's parliament. He affirmed that the motion in question does not have the effect of a law yet, and that it should not stand in the way of providing support for Palestinian civil society organizations. Mr. Niels reiterated the importance of differentiating between the territory of the State of Israel and the Occupied Palestinian Territory, and Germany's commitment to a two-state solution.

The representatives from Palestinian civil society at the meeting highlighted the urgent need for immediate actions and practical measures to be taken by States in order to bring to an end Israel's prolonged occupation, featured in the continued denial of the Palestinian right to self-determination, right to life, and to dignity, among numerous others, and comprising Israel's expanding settlement enterprise, annexationist measures and the isolation of Palestinian territory, namely Jerusalem and the Gaza Strip, and the presiding culture of impunity for perpetrators of human rights abuses and grave breaches.