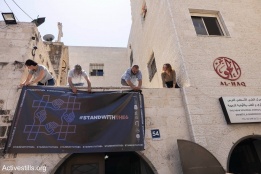 On 22 August 2022, Al-Haq submitted four written submissions ahead of the upcoming 51st regular session of the United Nations (UN) Human Rights Council (the Council), which will be held between 12 September and 7 October 2022. Addressing the Council under different agenda items, the four submissions underlined Israel’s ongoing dispossession and displacement facing Palestinian residents of Masafer Yatta; the failure to annually update the UN database of businesses operating within Israel’s colonial settlement enterprise; the entrenchment of Israel’s settler-colonial apartheid regime through its policy of silencing opposition; and the worrying escalation in the Israeli Occupying Forces’ (IOF) arbitrary and unlawful killings of Palestinians throughout the Occupied Palestinian Territory (OPT).

Overall, the written submissions urged the Council and its Member States to recognise, acknowledge, condemn, and take effective measures to dismantle Israel’s settler-colonial and apartheid regime imposed over the Palestinian people as a whole. Furthermore, the submissions called for international justice and accountability for Israel’s widespread and systematic human rights violations and international crimes committed against the Palestinian people, including through supporting of the annual updating of the UN database, the work of the UN Independent International Commission of Inquiry on the Occupied Palestinian Territory, including East Jerusalem, and in Israel, and a full, thorough, and comprehensive investigation by the International Criminal Court into the Situation in Palestine without any further delay.

Submitted under Item 4, the written submission tackled Israel’s discriminatory planning and zoning regime, which ultimately aims to displace, dispose and dominate the Palestinian people. Specifically, the written submission explained the ongoing Israeli attempts to forcibly transfer eight communities, comprising 1,200 Palestinians, including 500 children, in Masafar Yatta. Alarmingly, these attempts have been made more impending since May 2022, when the Israeli High Court of Justice rejected appeals against eviction orders issued to eight of the twelve Palestinian communities located in the so-called “Firing Zone 918”, effectively ending the legal proceedings that had lasted for more than two decades and giving a green light to the IOF to arbitrarily and forcibly displace the residents. Since then, several demolition orders have been issued, and dozens of Palestinians had their homes and structures demolished. Most recently, on 21 August 2022, the High Court of Justice has further rejected a petition to appeal the demolition of two schools and 32 residential facilities in the Masafer Yatta area. Overall, the written submission called on the Council to urge Israel to immediately revoke eviction and demolition orders issued against Palestinians facing the threat of forcible transfer in Masafer Yatta, and ensure the return of those evicted and/or the compensation of those whose properties were demolished where restitution is not possible.

This written submission, which was submitted under Item 3, addressed the importance of the annual update of the UN database of businesses involved in Israel’s colonial settlement enterprise. Through their involvement, businesses continue to, inter alia, sustain and develop Israel’s pillage and appropriation of Palestinian land and natural resources, which deny the Palestinian people’s sovereignty over their natural resources and their inalienable right to self-determination. Critically, the submission underlined that the failure to recognise Israel’s apartheid regime, which corporate entities support and off of which continue to actively profit, entrenches Israel’s colonial control over Palestinians, including economic subordination, resource dependency, and fragmentation. Finally, the submission urged the Council and its Member States to take concrete measures to halt the continuing support from businesses and corporations to Israel’s colonial settlement enterprise, including by annually and comprehensively updating the UN database and adopting measures to ban trade with Israeli colonial settlements.

This written submission, which was submitted under Item 9, documented Israel’s escalation in its arbitrary and unlawful killings, using unnecessary, disproportionate and indiscriminate force against Palestinians throughout the OPT, as well as its systematic failure to investigate and hold to account its agents for the unlawful killing of Palestinians. Specifically, the written submission underlined Israel’s extensive raids into Palestinian cities within the West Bank, notably in Nablus and Jenin, and the IOF’s consistent resorting to its shoot-to-kill policy. Furthermore, the submission highlighted Israeli escalation of violence against the Gaza Strip in August 2022, which remains under a brutal 15-year-old illegal blockade and closure, targeting civilian objects and killing and injuring civilians. Finally, the written submission called on Member States of the Council to urge Israel to immediately cease all practices and policies that violate the rights of the Palestinian people to life, fair trial and due process, among others, including its indiscriminate and deliberate targeting of Palestinians and its shoot-to-kill policy.