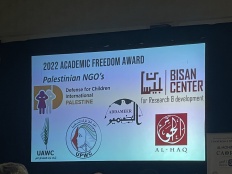 On 2 December 2022, Al-Haq, Addameer, Al-Haq, Bisan Center for Research and Development, Defense for Children International - Palestine, Union of Palestinian Women’s Committees, and the Union of Agricultural Work Committees were awarded the Middle East Studies Association Award for the Academic Freedom 2022 in Denver, Colorado.

The six Palestinian civil society and human rights organizations arbitrarily criminalized by Israel in October 2021 received the prestigious Academic Freedom Award 2022 in honor of their decades-long “pursuit of academic freedom, courageous resilience, and contributions to the field of Middle East Studies.” The organizations were presented with the award virtually during its 56th annual meeting in Denver, Colorado.

“For decades, international scholars and human rights advocates have relied on well-researched and meticulously-documented reports from these six organizations,” MESA President Eve Troutt Powell said of the awardees. “They have continued to do their critical work in the occupied West Bank and Gaza while facing enormous pressure from the Israeli government, especially in the last year since Israel banned them, ransacked and shut down their offices”.

For more on the award, please read MESA’s statement here.