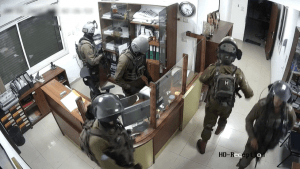 On 29 September 2022, Al-Haq delivered a joint oral intervention under the interactive dialogue on the Secretary General’s report on alleged reprisals against those who seek to cooperate or have cooperated with the United Nations, its representatives and mechanisms, on behalf of the six Palestinian civil society organisations arbitrarily outlawed by Israel, as part of its engagement with the UN Human Rights Council 51st session.[1] The six organisations welcomed the Secretary-General’s report, which highlighted Israel’s dangerous acts of reprisals against Palestinian human rights defenders and civil society organisations engaging with the UN, but critically noted that the report failed to contextualise these attacks within the broader context of Israel’s settler-colonial and apartheid regime. Furthermore, the joint statement highlighted that Israel’s attack against the six organisations is a “part of a wider attack against the Palestinian people aimed to eliminate them, and deny their rights to self-determination and return, for the realisation of the Zionist settler-colonial project”. Finally, the organisations urged the Council and its Member States to take concrete measures to ensure the rescindment of Israel’s arbitrary designations, and the halting of Israel’s systematic and institutionalised harassment and persecution of Palestinian human rights defenders.

This statement is delivered on behalf of the six Palestinian organisations arbitrarily outlawed and criminalised by Israel. While we welcome the Secretary-General’s report highlighting Israel’s dangerous acts of reprisals against Palestinian human rights defenders engaging with the UN, the report failed to contexualise these attacks within the broader context of Israel’s settler-colonialism and apartheid. The report underlined the baseless criminalisation of six leading Palestinian civil society organisations, online surveillance of their staff members, and arrest of human rights defender Salah Hammouri, who continues to be held in administrative detention without charge or trial indefinitely, and who has been on hunger strike in protest for five days, along with 29 others.

Beyond the reporting period, Israel continues to escalate its attacks. On 18 August 2022, the Israeli Occupying Forces (IOF) raided and forcibly closed the offices of seven Palestinian civil society organisations, which are: Al-Haq, Addameer Prisoners Support and Human Rights Association, Bisan Center for Research and Development, Defense for Children International-Palestine, the Union of Agricultural Work Committees, the Union of Palestinian Women’s Committees, as well as the Health Work Committees. The IOF confiscated documents and damaged property, which threatens the privacy and safety of victims and the communities these organisations serve.

The attack on the six organisations is part of a systematic and ongoing attack against Palestinian civil society to defund, silence, intimidate, and stop their indispensable work towards justice and accountability, which amounts to an inhumane act of apartheid. This is also part of a wider attack against the Palestinian people as a whole aimed to eliminate them, and deny their rights to self-determination and return, for the realisation of the Zionist settler-colonial project.

While Israel’s attacks have been strongly condemned worldwide, condemnations are not enough. Without concrete and immediate action, Israel is emboldened by impunity and continues to commit war crimes and crimes against humanity against Palestinians. A month before the raids, the European Union announced its intention to revive the EU-Israel Association Council, while Israel is forcibly transferring over one thousand Palestinians in Masafer Yatta.

Instead of rewarding Israel for its systematic, widespread and institutionalised human rights violations, we call on the Secretary-General and Member States to take concerted action to pressure Israel to rescind its arbitrary designations, cease the harassment and persecution of Palestinian human rights defenders, and release Salah Hammouri, Mohammad El-Halabi, and all Palestinian human rights defenders detained. We also call on Member States to continue funding and supporting Palestinian civil society organisations.