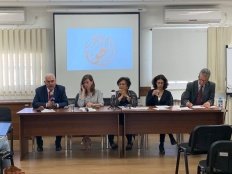 In August, Israeli authorities raided the offices of seven Palestinian civil society organizations and ordered their closure in an attempt to stop their critical work, and further silence Palestinians. In response to this alarming escalation in the repression of our Palestinian partners, the International Federation for Human Rights (FIDH), Amnesty International, and Human Rights Watch (HRW) have gathered as a delegation in the Occupied Palestinian Territory (OPT) to voice their support for Palestinian civil society and fight against abusive and prolonged occupation, annexation, impunity and apartheid.

Ramallah, 28 September - On the heels of the most recent round of Gaza hostilities, Israeli authorities escalated their assault on Palestinian human rights defenders and civil society organizations in the occupied West Bank. In August, Israeli armed forces raided seven prominent Palestinian civil society organizations, six of which were arbitrarily outlawed and branded as ‘terrorist groups’ in October 2021.

These raids by Israeli authorities to shutter the Palestinian groups are aimed at obstructing human rights documentation work and punishing those who criticize Israeli authorities’ human rights and international law violations, and call for accountability, including for apartheid and persecution of millions of Palestinians. Apartheid and persecution are punishable as crimes against humanity and fall under the International Criminal Court’s (ICC) jurisdiction. The ICC’s prosecutor has an open probe into serious crimes committed in Palestine, which offers the opportunity to address Israel’s impunity that has fueled longstanding and repeated human rights violations and crimes under international law.

“In a time of global tension and degradation for human rights across the world, in which Israel plays its longstanding part, the Israeli government under Naftali Bennet and Yair Lapid’s premiership, is not troubled to tighten the repression of the Palestinian people and suppress any attempt at opposition.” declared FIDH’s honorary president, Souhayr Belhassen, before adding “While FIDH claims our unfaltering solidarity with the Palestinian’s rights to self-determination, we call on the international community to show equal firmness against Israel’s actions which can only be qualified as those of a rogue state.”

Alexis Deswaef, FIDH’s vice president and human right’s lawyer also commented: “The blurring of the lines in all aspect of interior policy, the abusive branding with “terrorist organization” coupled with the misuse of anti-terrorist legislation is part of a coherent throttling process of the civil society in Palestine and Israel.”

Shawan Jabarin, Al-Haq’s General Director, and Secretary General of FIDH asserted: “Far from leaving the field open for the next legislative elections to go untroubled in Israel, these raids showed how little democracy means when its antithesis is being applied elsewhere on an oppressed people. The Palestinian people deserve to live in freedom and in dignity and for that, our work to hold Israel accountable is vital. Despite the attacks against us, we will continue to carry out our duties to protect the rule of law, human rights of the Palestinian people, including their collective right to self-determination, and the right of refugees to return, and we will continue to protect international law and human rights globally.”

Nathalie Godard, Amnesty International’s France director of campaigns, said: “The repression of Palestinian civic space is part of the system of apartheid. Not only are Palestinians under Israeli military occupation, conducted with manifold violations of international humanitarian law and human rights law, but then also those organizations and human rights defenders who seek to assist people in need, are shut down. Amnesty calls on Israel to revoke the “terrorism” designation for the six organizations and cancel the military orders closing the organizations’ offices. The organizations’ staff and directors should be allowed to do their human rights, social welfare and research work free from harassment. Salah Hammouri should be immediately released, unless charged with an internationally recognized crime, and the threat of his deportation from Jerusalem removed.”

Last August's escalation comes after the baseless smears that hindered the Palestinian human rights organizations' funding and legal representation, phone hacking, other surveillance, arbitrary arrests and travel bans against staff members. But despite the ongoing harassment against these organizations, they have continued their vital work providing essential humanitarian assistance and social welfare services to Palestinian communities, conducting research, documenting human rights abuses in Palestine and advocating for accountability.

States should call on the Israeli government to rescind its designations of these Palestinian human rights groups and allow them to carry out their vital work unhindered. With the recent resumption of the EU-Israel Association Council, the European Union’s main diplomatic body promoting intergovernmental relations, European governments should demonstrate their unwillingness to compromise on their stated values, place human rights at the center of their Israel and Palestine policy and end all activities that contribute to apartheid and further repression of the Palestinian people. Overall, all states should make clear that they will impose meaningful consequences on the Israeli government should it fail to reverse course.

- Read the full intervention of Sari Bashi at the press conference here.