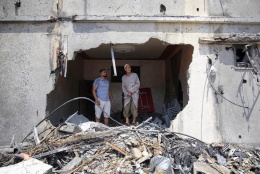 Since Friday 5 August, the date of Israel’s latest military aggression on the Gaza Strip, Al-Haq has documented the killing of 46 Palestinians, including 33 civilians, 16 of whom are children and four women.[1] Further, Al-Haq has documented patterns of widespread attacks by the IOF against civilians and civilian objects, in breach of the principles of distinction, proportionality and precaution in attacks, and which may give rise to individual criminal liability for war crimes and crimes against humanity, that fall within the jurisdiction of the International Criminal Court (ICC). On Sunday, 7 August a ceasefire agreement was negotiated between the Palestinian Islamic Jihad and Israel with mediation from Egypt.

The recent wave of Israeli-provoked attacks, comes little more than a year since the May 2021 military offensive that killed 240 Palestinian civilians, resulting in the establishment of an emergency and especially mandated UN Commission of Inquiry to “investigate all underlying root causes of recurrent tensions, instability and protraction of conflict, including systematic discrimination and repression based on national, ethnic, racial or religious identity”. Such root causes include Israel’s settler colonialism and apartheid regime, which has, since 1948, fragmented and dominated the Palestinian people on both sides of the Green Line. Israel’s expansion of its settler-colonial and apartheid regime in 1967 in the Occupied Palestinian Territory has entrenched the denial of Palestinian people of exercising their right to self-determination. In the Gaza Strip, Israel’s strategic fragmentation policy against the Palestinian people to maintain its apartheid regime, is manifested through the denial of the majority of the population in Gaza of their right of return since 1948, as well as the segregation and illegal blockade and closure of Gaza, into a “Bantustan”.  The current military offensive, is the latest military offensive carried out with a familiar pattern of indiscriminate and disproportionate attacks to maintain the status quo of apartheid.

On Sunday, 7 August 2022, at approximately 7:00 pm an IOF reconnaissance plane (drone) targeted with a missile, a horse-drawn cart, while it was passing over the Samer junction near Firas market, in Gaza city centre. The attack killed two young men who were riding the horse-drawn cart, Shadi Imad Nimr Kuhail, 27, and Khaled Ayman Jamil Yassin, 27, both residents of the Zeitoun neighbourhood in Gaza City. Abd al-Rahman Jum’a Khalaf al-Silk, 19, a resident of al-Shuja’iya, and a passenger in a Skoda taxi, was also killed in the attack. He was taking a taxi home from his work, where he owns a shoe store in the Shati refugee camp. In addition, three civilians sustained injuries, including a traffic policeman who was sitting in a traffic police booth at the intersection. On Monday, 8 August 2022, at approximately 9:30 am medical sources at Shifa Hospital pronounced the death of the policeman, Mahmoud Ahmed Sabaa Daoud, 21, resident of Al-Nafq Street in Gaza City.

On Monday, 8 August 2022, at approximately 1:00 pm medical sources announced the death of Haneen Walid Mohammad Abu Qaida, 10. She had sustained serious injuries during a bombing attack of a gathering of her family members to celebrate the wedding of Akram Abu Qaida, by IOF military aircraft. On Saturday, 6 August 2022, at approximately 1:35 pm, the family were gathering around a civilian jeep owned by Mohammad Mahmoud Abu Qaida, near the Beit Hanoun crossing in the northern Gaza Strip. The family were on their way to transport the bride of their son Akram to her future marital house, fearing that they may have to cancel the wedding due to the worsening situation on the ground. The bombing killed the grandmother of the child Haneen, Mrs. Naama Talba Hammad Abu Qaida, 60 years, who is also the mother of the groom. Five children were injured in the same incident.

The two incidents are the latest in a pattern of indiscriminate and systematic attacks on civilians in the Gaza Strip. Critically during the conduct of hostilities, Israel must comply with the principle of distinction between civilian and military objects, as per Article 48 of the First Additional Protocol to the Geneva Conventions, as well as the prohibition of indiscriminate attacks, “which may be expected to cause incidental loss of civilian life, injury to civilians, damage to civilian objects, or a combination thereof, which would be excessive in relation to the concrete and direct military advantage anticipated” as per Article 51(5)(b) of the First Protocol to the Geneva Conventions, also binding on Israel as customary law. The direct attacks on civilians in the horse-drawn cart, and the bombing of the wedding party gathering, a group that clearly included a large number of civilians, including children, may be considered as indiscriminate attacks within the meaning of Article 51(5)(b). Such acts may amount to war crimes within the jurisdiction of the International Criminal Court.

Further, the targeting of civilians in the horse cart and the wedding party gathering, may amount to inhumane acts of apartheid for the purposes of maintaining the apartheid and the systematic oppression of one racial group over another, i.e., Jewish Israelis over Palestinians. Such acts include the “murder of members of a racial group or groups” and the “deliberate imposition on a racial group or groups of living conditions calculated to cause its or their physical destruction in whole or in part”.[2] Israel’s imposition of inhumane life conditions, including the 15-year-old closure and blockade, denial of fuel, electricity and other services to the Gaza Strip, and the de-development of the economy, has subjugated the protected population in the Gaza strip to layers of human rights violations. Such catalogue of inhumane acts to subdue the population taken together with the recent military offensive against the protected Palestinian population in Gaza, point to large scale attack against the civilian population, which may meet the threshold of the crime against humanity of apartheid.

[1]  Preliminary figures from Palestinian Ministry of Health and Al-Haq's documentation, as of 9 August 2022. Al-Haq investigations are ongoing and will include disaggregated data.