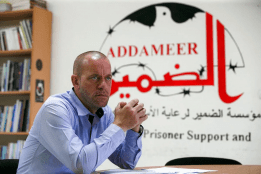 On 21 March 2022, a joint urgent appeal was submitted to the UN special procedures from the Association France Palestine Solidarite; Cairo Institute for Human Rights studies; the Palestinian Human Rights Council, including Al-Haq; and the Platform of French NGOs for Palestine on the recent arbitrary arrest and detention of Salah Hammouri by Israel. Salah Hammouri, 36, is a Palestinian- French Jerusalemite, Human Rights Defender, lawyer and member of the Addameer Prisoner Support and Human Rights association, as well as a former political prisoner.[1]

On 7 March 2022, between 4:00-5:00 am, about 25 Israeli Occupying Forces (IOF), including special unit forces, Al-Musta'ribeen Unit, broke Salah Hammouri's apartment door in Kufor Aqab north of Jerusalem, entered his bedroom, and grabbed him from his bed while  he was still sleeping.[2] The IOF ransacked the premises and confiscated three mobile phones and one laptop belonging to Salah. During his arrest, Salah sustained an injury to his wrist as he was bound with a plastic zip-tie, aggressively escorted out, and forced to kneel on the floor facing a wall until he was transferred to a military jeep. Salah was first taken to Ofer military base in Beitounia, Ramallah, where he was held until the evening and later transferred to Al-Mascobbiya Interrogation Center in Jerusalem. On 9 March 2022, an Israeli military judge extended Mr Hammouri’s initial detention order which was soon followed by a three-month administrative detention ordered by the Israeli military Commander on the basis of  “secret information”.[3]

At the time of his arrest and at the time of writing, Mr Hammouri continues to challenge the decision by the Israeli Interior Ministry to revoke his permanent residency status in Jerusalem.[4] The initiation of Mr Hammouri's residency revocation under Amendment No. 30 to the Entry into Israel Law of 1952 entails profound violations of international law and puts him at imminent risk of forced deportation,[5] amounting to grave breaches of the Geneva Conventions, the war crime of forced population transfer, and crimes against humanity of displacement, and apartheid.[6] The Ministry’s decision further results in the denial of basic human rights, including inter alia the rights to family life, health, education, work.

Salah Hammouri's case highlights the Israeli occupation and apartheid regime's widespread and systematic practice of illegal population transfer and demographic manipulation, as manifested through laws, policies, and practices, to maintain their institutionalized regime of racial domination and oppression over the Palestinian people. His case was highlighted in Amnesty International's landmark report demonstrating Israel's crimes of apartheid, specifically the illegal practice of forcible population transfer, deportations, and demographic engineering.[7]

Accordingly, it is imperative to immediately and urgently address the arbitrary arrest and continued punitive residency revocation of Salah Hammouri as it represents a step towards the wider application against HRDs, peaceful dissent, and Palestinians of Jerusalem more generally to achieve demographic goals. Al-Haq and fellow Palestinian and International Human Rights organisations call for the immediate intervention of the relevant UN Special Procedure mandates and urge them to:

[3] International Federation For Human Rights “Israel and the Occupied Palestinian Territory (OPT): Arbitrary detention of human rights lawyer Salah Hamouri” (11 March 2021); It should be noted that while this article states a four month detention has been given, Salah Hammouri’s Legal team was contacted on the 13th March 2022 to confirm the administrative detention was for three months – see urgent appeal.