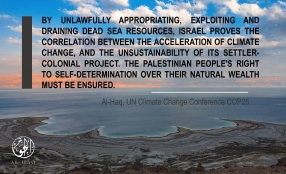 On 1 November 2021, at the COP26 in Glasgow, Palestinian Prime Minister Shtayyeh mentioned the environmental threats caused by Israel’s exploitation and exhaustion of Dead Sea natural resources, accelerating and exacerbating climate change-related repercussions. Since the 1960s, the Dead Sea has lost one third of its surface and has been receding by about a meter a year, mostly due to the combination of climate change-related temperature rises, increasing evaporation, mineral extraction and water diversion for agriculture and drinking.[1]

The Dead Sea is rich in minerals that are profitable for Israel’s unlawful exploitation and development of cosmetic industries, including silt, sand, gravel and mud. Since 1967, Israel has taken control over the Dead Sea to exploit its natural resources and establish settlements along its shores. In its report Pillage of the Dead Sea: Israel’s Unlawful Exploitation of Natural Resources in the Occupied Palestinian Territory, Al-Haq exposes the case of Ahava Dead Sea Laboratories Ltd, 44,5 percent of whose shares are owned by the nearby settlements of Mitzpe Shalem and Kalia, that mines and manufactures products of the mud of the Dead Sea.

As Occupying Power of the Palestinian territory, Israel is bound by Article 43 of the Hague Regulations stipulates that the Occupying Power “shall take all the measures in his power to restore, and ensure, as far as possible, public order and safety, while respecting, unless absolutely prevented, the laws in force in the country.”[2] As per Article 55 of the Hague Regulations, it does not acquire sovereignty over public property, including Dead Sea non-renewable resources considered as non immovable assets, and “must safeguard [their capital], and administer them in accordance with the rules of usufruct.”[3] This entails that Israel is prohibited from exploiting Dead Sea resources in such a manner that undermines its capital. Its ability to use and administer them should be restricted to providing for the needs of the Palestinian people, not its national economy or its own settler population.

Israel’s development and grant of permission to corporations to develop industry, commerce and agriculture - exhausting limited Palestinian resources and accelerating the destruction of the Palestinian natural environment, amounts to the war crime of pillage under Article 8(2)(b)(xvi) of the Rome Statute of the International Criminal Court.[4] Israel’s intentional exploitation and depletion of Dead Sea resources exemplifies the correlation between the acceleration of climate change impacts, and the entrenchment of its settler-colonial project, under the framework of apartheid. By appropriating, exploiting and draining Dead Sea resources, Israel actually maintains its domination over the Palestinian people, which is one of the main features of its apartheid regime, and as per Article II of the Apartheid Convention,[5] is a crime against humanity under Article 7(1)(j).[6]

By developing and overexploiting the Dead Sea natural resources, Israel is not only exhausting finite wealth owned by the Palestinians, but also annihilating any form of future sustainable development of endangered ecosystems. The Dead Sea is a perfect example of the advanced impacts of Israel’s colonial apartheid on the Palestinian landscape, in which the Palestinian identity is rooted.

[5] UN General Assembly, International Convention on the Suppression and Punishment of the Crime of Apartheid, 30 November 1973, A/RES/3068(XXVIII), Article II(d), https://www.un.org/en/genocideprevention/documents/atrocity-crimes/Doc.10_International%20Convention%20on%20the%20Suppression%20and%20Punishment%20of%20the%20Crime%20of%20Apartheid.pdf