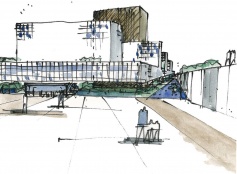 Al-Haq indicated in its letters that, starting with the commencement of Ireland’s presidency in September 2021, the UNSC presidency will be made of ICC States Parties, in an uninterrupted manner, until January 2022. Al-Haq regards this as an outstanding opportunity for newly-elected member States at the UNSC –Ireland, Kenya, Mexico, Niger and Norway– to pursue collective efforts, as ICC State Parties, to promote and advance cooperation between the UNSC and the ICC throughout this period. Al-Haq strongly encouraged the aforementioned states to include such discussion, especially in relation to the Situation in Palestine, as an agenda item at the UNSC throughout their presidency. The letter stated that it is important for States parties within the UNSC to enhance and maximize their presence at the Presidency of the Council. Such a position bestows a great opportunity to promote and advance international justice and accountability on the UNSC agenda.

Al-Haq added in its letter that to ensure the effective arrest and transfer of individuals accused of crimes within the jurisdiction of the ICC, the UNSC should promote cooperation with the Court in situations that are being examined before the Court without a UNSC referral. In this regard, there is no reason –at least legally or procedurally– that prevents the UNSC from imposing the obligation to cooperate with the Court on all members of the UN in accordance with Article 25 of the UN Charter which stipulates that: “[t]he Members of the United Nations agree to accept and carry out the decisions of the Security Council.” In addition, the UNSC should include a mandate to cooperate with the ICC in its resolutions establishing or renewing peacekeeping, peace enforcement and peacebuilding missions that operate in States that are subject to ICC investigations.

Finally, Al-Haq reminded the respective states that it has been over 17 years since the International Court of Justice advisory opinion concluded on the illegality of the Israeli apartheid wall and the Israeli settlements in the occupied Palestinian territory (OPT). It has been around five years since the UNSC itself decided in its resolution 2334 (2016) that the Israeli settlements “have no legal validity and constitute a flagrant violation under international law and a major obstacle to the achievement of the two-State solution and a just, lasting and comprehensive peace.” Since then, Israel has continued to expand and develop settlements with impunity. It is time that the UNSC addresses this pressing issue again. It is time that states with a renowned track record of resolute commitment to human rights, international justice and the rule of international law, put this issue on the UNSC agenda.

Finally, Al-Haq recommended the respective states with Presidency of the UN Security Council to: