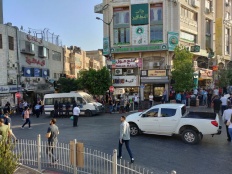 The serious deterioration of rights and freedoms, and the weakness of the main official institutions have contributed to weakening the internal Palestinian situation, and undermined the Palestinian political system’s capacity to challenge external challenges that face our national cause, namely the Israeli occupation violations and its policies, which are based on imposing facts on the ground. Such circumstances have also limited the effectiveness and role of the Palestinian Authority with all its components, and the ability of the political system to benefit from the wide international solidarity with the Palestinian people in various international forums, following the recent Israeli attacks on Jerusalem and the Gaza Strip. This in turn negatively affects the achievements of our people and their struggle in the face of occupation and colonialism, requiring serious examination of the current stage.

The end of 2020 and the beginning of 2021 have witnessed further serious deterioration in the situation of rights and freedoms. By amending the Law on the Judicial Authority, the executive authority has attacked the judiciary, destructing constitutional principles guaranteeing the principles of the rule of law and the separation of powers, which are affirmed in the Palestinian Declaration of Independence and the Palestinian Basic Law. The dissolution of the Palestinian Legislative Council, and the complete absence of the Palestine Liberation Organization (PLO) with all its components and institutions, have brought the three authorities under the control and custody of the executive authority, establishing a totalitarian and undemocratic regime, which gives the executive authority control over all other authorities without any oversight, liability or accountability, contrary to the constitutional principles, and the values of integrity, transparency and good governance.

Early this year, the Palestinian President issued a presidential decree calling for general legislative and presidential elections and a decree on public freedoms, despite the lack of its legal value. The hope has faded however, when the decrees were repealed and since the security services have been practicing arbitrary political arrests on the basis of freedom of opinion and expression. These arrests and trials included numerous political activists, ex-detainees and a number of candidates in electoral lists. The violations culminated in the killing of the political activist and candidate for legislative elections on the Freedom and Dignity list, Nizar Banat, and the following dangerous decline in the situation of rights and freedoms. Since then, the deteriorating attacks on rights and freedoms have included denying the right to peaceful assembly and suppressing freedom of opinion and expression, by security services and officers in civilian clothes affiliated with the executive authority, who beat protesters and dragged them in the streets, used excessive force, confiscated protesters’ phones and published their contents in violation of the right to privacy, specifically for females, violated the freedom of press by attacking journalists and confiscating their equipment, and arrested and tried a large number of participants in these peaceful assemblies. All these acts constitute serious violations of the rights and freedoms of Palestinian citizens guaranteed by the international human rights conventions to which the State of Palestine has acceded.

Given the deteriorating situation of rights and freedoms, and the continuation of the Palestinian Authority's policy of repression by its security services, moving into the direction of tyranny and authoritarianism is clearly evident. This is manifested through the exclusivity in control and the capture of State institutions for the benefit of individuals, shrinking the space for civil society organizations, and the denial of freedom of opinion, expression, and assembly in a grave violation of the provisions of the Palestinian Basic Law, the Palestinian Declaration of Independence, Palestinian law and legislations, and international human rights conventions. In the light of the above and given the weak internal situation to confront internal and external challenges, the undersigned human rights and civil society organizations emphasize the following:

2- Referring the head of the government, in his capacity as the Prime Minister and the Minister of Interior, to trial in order to hold him accountable, as he and his government have failed to protect the rights of citizens. The Prime Minister has failed to fulfill his responsibilities under the Palestinian Basic Law, and has been unable to implement his obligations to protect the freedom of press, the right to peaceful assembly, and the freedom of opinion and expression. The government has also failed to manage the current crisis, and protect rights and freedoms.

3- Referring the Director General of the Palestinian Police, and the Police Director of Ramallah and Al-Bireh to trial in order to hold them accountable on the grave violations of citizens’ rights, which were committed by Palestinian police officers in their official capacity, including by preventing peaceful assemblies, assaulting and beating protesters, arresting some of them, using excessive force, and committing acts of torture and ill-treatment, in violation of the law and codes of conduct. Police officers have also abandoned their duty to ensure freedoms and to protect civilians, by failing to prevent attacks on protesters by persons in civilian clothes.

4- Holding the Civil Public Prosecutor responsible for detaining participants in peaceful assemblies and bringing them to trial on the basis of practicing their constitutional rights as stipulated in the Palestinian Basic Law, which amount to arbitrary detention according to international human rights standards binding on the State of Palestine. We also hold him responsible for the Public Prosecution’s failure in opening an investigation in relation to the penal complaint submitted to the Public Prosecutor on 1 July 2021 by civil society organizations concerning violations of the rights of citizens.  Meanwhile, the Public Prosecution has immediately responded to the security services by providing them with investigative files of political activists, in a clear discriminatory manner to satisfy the executive authority and its security services. In that, the Public Prosecutor has abandoned his job under the law as the agent of the society as a whole.

5- Affirming that achieving justice for political activist Nizar Banat lies in transparent and impartial criminal investigations, and by brining all members and officials proven involved in his killing to a fair trial, in which judicial guarantees and safeguards, as well as remedies for him and his family are ensured and achieved. Moreover, trying suspects should be conducted in a timely manner in order for the punitive policy not to lose its philosophy in achieving deterrence.

6- Reaffirming the principles of accountability and liability, and opening serious criminal investigations by the civil and military Public Prosecution on all violations committed against citizens’ rights that are guaranteed by the Palestinian Basic Law, in a way that would ensure the achievement of remedies for victims and enhance deterrence for law enforcement officers and their superiors.

7- The undersigned organizations announce their suspension of all forms of dialogues with official institutions concerning the human rights situation. We view the recent dialogues with official bodies as merely public relations; their outcomes have not been dealt with, whether by reviewing the conduct of those charged with law enforcement, neither by conducting serious investigations or accountability measures for violations of citizens' rights. We believe that any future dialogue must be linked to serious measures and guarantees of accountability and respect for public rights and freedoms.

8- Calling on political actors to fulfill their national and community role during this serious stage, take courageous positions, activate their community presence, take initiatives to protect and promote rights and freedoms, stand up when they are violated, and assume their responsibilities in this regard.

9- Issuing an immediate decree calling for general presidential and legislative elections and elections for the Palestinian National Council and the PLO and scheduling them before the end of this year. This should be accompanied by finding appropriate solutions to ensure that these elections take place in Jerusalem with the participation of its residents, and without the interference by the Israeli occupying authorities. These elections would revive hope among Palestinian youth, reinforce the right to political participation, and pave the way to end the internal division. They would also establish a comprehensive national dialogue that would contribute to the re-establishment of the PLO and the effectiveness of its institutions, reinforce the internal situation in the face of the Israeli occupation, and restore the compass to its correct direction, by unifying official and civil efforts to face the Israeli violations.

Hurryyat Center for Defense of Liberties and Civil Rights

Coalition for Accountability and Integrity (AMAN)

Palestinian Initiative for the Promotion of Global Dialogue and Democracy (MIFTAH)

Bisan Center for Research and Development

Treatment and Rehabilitation Center for Victims of Torture