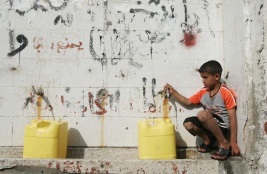 Yesterday, four Palestinian and regional human rights organizations submitted a joint urgent appeal to the United Nations (UN) Special Procedures on the escalating water and sanitation crisis in the Gaza Strip, occupied Palestinian territory (oPt). Notably, this appeal highlights the sharp deterioration of the water and sanitation conditions in Gaza resulting from the increased punitive measures imposed by Israel against the civilian population in August 2020.

Insufficient access to clean and safe drinking water and sanitation facilities in the oPt has been a hallmark of Palestinian life for decades, with resources overexploited and water quality steadily deteriorating in parallel and as a result of Israel’s illegal occupation and apartheid regime. Israel, the Occupying Power, has prohibited Palestinians in the whole oPt from drawing any of its water since 1967 and currently controls more than 85 percent of the oPt’s water sources.

Despite an already catastrophic situation, further exacerbated by Israel’s 13-year illegal closure and regular military bombardments, the water and sanitation crisis in the Gaza Strip continues to escalate. Between 13–31 August, Israel launched a series of additional punitive measures on Gaza—including a ban on fuel shipments—which led to a spike in the already acute power shortage.

With electricity available only three-four hours at a time, Gaza’s municipal water supply system functioned only approximately 15 percent of the day, triggering a spike in the longstanding water and sanitation crisis. Before the August crisis, it was reported that 97 percent of water in Gaza is unfit for human consumption based on the standards of the WHO and that 95 percent of Gaza’s two million residents do not have access to drinkable water.

Today Gaza’s residents receive a maximum of six hours of electricity at a time, which continues to hinder the functioning of existing wastewater treatment plants and sanitation systems and is insufficient to implement even basic public health measures—such as hand hygiene—needed to combat the rapid spread of COVID-19.

Critically, the peak of the water and sanitation crisis coincided with the detection of the first COVID-19 cases in the Gaza Strip outside of quarantine centers and the ensuing mandatory-lockdown between 24 August–6 September 2020. Without sufficient or clean water entering the home, or income to purchase trucked or bottled water, the sanitation conditions began raising new health and hygiene risks for the population of Gaza.

The severity of the situation was brought to the attention of the UN Special Rapporteur on the human rights to water and sanitation during the 45th Session of the UN Human Rights Council last September. This appeal urges the mandate holder to: