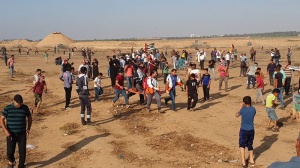 On 21 June and 28 June 2019, Palestinians protestors, including men, women and children and families, gathered in the five return camps established by the National Authority for the Return March. Protesters organized popular and folkloric activities in the return camps and surrounding areas, some 50-300 meters from the fence. The protestors chanted national slogans and raised Palestinian flags, demanding an end to Israel’s unlawful prolonged occupation, the illegal closure of the Gaza Strip and the continued denial of their internationally recognized right of return as refugees to their homes. In response, Israel positioned soldiers behind the hills and sand dunes, inside military watch towers and military enclaves behind the fence, on the other side. Some protesters threw stones at the Israeli forces, while the latter returned with unnecessary and excessive force, firing on the protestors with live fire, rubber bullets and tear gas canisters.

During the 63rd Great Return March on 21 June 2019, thousands of Palestinian women, children, young men, and families gathered in the five return camps near the fence along the Gaza Strip between 4:30 and 7:30 pm. Protesters organized popular and folkloric activities, chanted national slogans, and raised Palestinian flags. Meanwhile, dozens of demonstrators gathered between 50 and 300 meters from the fence, at which Israeli snipers were positioned behind hills and mounds of sand, and inside military towers and military jeeps behind the fence on the other side. Some protestors threw stones at the Israeli forces. In response, Israeli soldiers fired live ammunition, rubber-coated bullets and tear gas at the demonstrators, injuring 114, including 33 children, five women, and one medic. Of the injured, 48 were wounded with live bullets and shrapnel, 25 were wounded by rubber bullets, and 41 were injured by tear gas canisters. Dozens others suffered from suffocation by tear gas inhalation and were treated on the ground.

Friday, 28 June 2019, saw an increase in the numbers returning to protest at the Great Return March.  Between 4:00 pm and 7:00 pm, thousands of civilians, including women, children and entire families, started gathering at the five encampments established by the National Authority for the Return March, adjacent to the fence. The protesters chanted slogans, raised flags, and a number of incidents arose where protestors attempted to approach the separation fence and throw stones and Molotov cocktails at the Israeli forces, who fired live, rubber bullets and tear gas canisters at them.

The force used by the IOF resulted in the injury of 122 Palestinian protestors, including 38 children, five paramedics, and two journalists. Among those wounded, 41 were hit with live bullets and shrapnel, 35 were hit with rubber bullets and 46 were directly hit with tear gas canisters.

In addition, dozens of civilians suffered tear gas inhalation due to tear gas canisters that were fired by the Israeli forces. An ambulance, on the east of Rafah, was also damaged by a rubber coated metal bullet.

In Rafah Governorate, in al-Shouka, east of Rafah, 29 demonstrators, including 14 children, a paramedic and a journalist were injured, of these 12 were wounded with live bullets and bullet shrapnel, six were wounded with rubber coated metal bullets, and 11 were hit directly with tear gas canisters resulting in injuries to different parts of the body.

In the Central Governorate, east of al-Bureij refugee camp, 30 protestors were injured, including eight children, two volunteer first responders and a journalist. Of these, 15 were wounded with live bullets and fragments of bullets, 13 were injured by direct tear gas canister hits, and two were injured by rubber bullets.

In the Gaza Governorate, in Malka, east of Al-Zaytoun neighborhood east of Gaza City, 21 protestors were injured, including two children. Of the injured, three were wounded by live bullets and fragments of bullets and 18 were wounded with rubber bullets.

In the North Gaza Governorate, in Abu Safiya, east of Jabaliya, in the northern Gaza Strip, 21 demonstrators were wounded, including 10 children and a paramedic. Nine protestors were shot with live fire, including six children. Of the injured, seven were hit directly by tear gas canisters, including four children. In addition, five were injured by rubber bullets.

In Khan Younis, in east of Khuza'a, east of Khan Younis, 21 protestors were wounded, including four children and a first responder. In total, two were wounded by shrapnel from bullets, 15 suffered injuries sustained from direct tear gas canister hits, and four were wounded with rubber coated metal bullets.