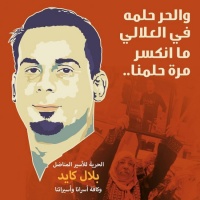 The Palestinian Human Rights Organizations Council (PHROC) calls for the immediate release of hunger striking administrative detainee Bilal Kayed, who has been on hunger strike for 30 days. We have been informed by attorneys that Mr. Kayed has refused to undergo any medical examinations and to take any vitamins or salt supplements. He is currently only consuming water. He feels tiredness, dizziness, weakness, and inability to fall asleep. His weight has fallen significantly since his hunger strike. Mr. Kayed’s health severely deteriorates and will be transferred to a hospital. Mr. Kayed has lost consciousness due to his health condition.

Bilal Kayed, a 35-year-old Palestinian from Nablus, was arrested in 2001 and sentenced to 14-and-a-half years. He was previously placed in isolation in Rimon prison since September 2015 until his scheduled release on 13 June 2016. However, a six-month administrative detention order was issued against him on the same day of his scheduled release, immediately after which he was placed back in isolation. Mr. Kayed has been on hunger strike since 15 June 2016 in protest of his detention without charge or trial.

The Israeli occupation policy of administrative detention is used in a widespread and systematic manner, which violates international human rights and humanitarian law. Administrative detention can be only usedinemergency situations, but requires that the authorities follow basic rules for detention, including a fair hearing at which the detainee can challenge the reasons for his or her detention. These minimum standards of due process have been clearly violated in Mr. Kayed’s case, leaving him without any legitimate legal means to defend himself. The military court's order of administrative detention without having any clear evidence or conducting a serious investigation about the credibility of the information used against Mr. Kayedis arbitrary and contrary to relevant international norms and conventions; especially Article 78 of the Fourth Geneva Convention.