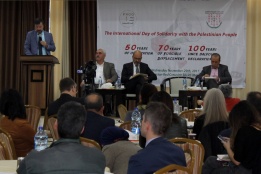 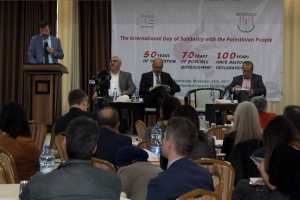 November 29th marks the International Day of Solidarity with the Palestinian People. While the United Nations (UN) General Assembly established this day of remembrance and support for the inalienable rights of Palestinians nearly 40 years ago, November 29th is also the day that the General Assembly recommended the partition of Palestine in 1947, in disregard of Palestinians’ right to self-determination. The Partition Resolution paved the way for the mass expulsion of Palestinian refugees, whose right to return to their homes has been reaffirmed in over a hundred resolutions since1948, but is yet to be realized. It also paved the way for the ongoing 50-year occupation of the West Bank, including East Jerusalem, and the Gaza Strip, and for seven decades of institutionalized discrimination faced by Palestinian citizens of Israel.

Within the context of nearly 70 years since the Nakba, and 50 years of occupation, Israeli policies and practices have remained constant in their targeting of Palestinians on both sides of the Green Line. For decades, endless cycles of land expropriation, dispossession, and displacement have been met with empty condemnations and inaction. Meanwhile, Israel’s repressive policies against the Palestinian people remain, from mass arbitrary detentions and arrests of protected Palestinian civilians, including women and children, to extrajudicial killings, and collective punishment measures imposed against entire Palestinian communities. Israel’s brutal occupation has long deprived the Palestinian people of the freedom and independence to which they are entitled under international law. As recently stated by the UN Special Rapporteur on the situation of human rights in the Occupied Palestinian Territory (oPt), Michael Lynk, the international community’s continued failure to hold Israel to account has become “a darkening stain on the efficacy of international law and the source of multiple broken promises to the Palestinian people.”

Ever pressing is what this inefficacy and impunity means for Palestinians, particularly Palestine’s youth whose faith in international law as a peaceful means to resolve the century-long conflict is gradually fading. Today, Israel has created a man-made humanitarian crisis in the Gaza Strip, with households receiving only a few hours of electricity and water a day, a near-complete collapse of the health sector, and the inability of Palestinians to travel out of the Gaza Strip, often even for medical treatment. In the West Bank, including East Jerusalem, Israel continues to deepen its occupation by expanding settlements, exploiting natural resources for the benefit of its economy, and creating coercive environments leading to the forcible transfer of Palestinian communities. In East Jerusalem, Israel continues to erase the Palestinian character of the city by revoking Palestinians’ residencies, demolishing homes, and restricting family unification, amongst countless other policies.

On the International Day of Solidarity with the Palestinian People, the Palestinian Human Rights Organizations Council (PHROC) calls on Israel to end its half-century-long occupation of the oPt and to grant the Palestinian people their inalienable rights to self-determination, return, restitution, and compensation. PHROC further calls on third States to abide by their obligations under international law, by cooperating to bring to an end Israel’s colonial settlement enterprise and occupation at large, and ensuring accountability for Israel’s violations of international law, including by investigating and prosecuting international crimes committed in the oPt and supporting the work of the International Criminal Court in its preliminary examination into the situation in Palestine. After decades of Israeli impunity, the international community must finally take action and impose sanctions on Israel for its crimes against the Palestinian people.