The Palestinian Human Rights Organizations Council (PHROC) condemn as unlawful Israel’s denial of entry to esteemed United States Congresswomen, Rep. Rashida Tlaib (D-Mich.) and Rep. Ilhan Omar (D-Minn.) to the Occupied Palestinian Territory (OPT), subjected to a continued Nakba since 1948 and under Israeli military occupation since 1967. In particular, PHROC reiterates that Israel, as temporary military occupant of the Palestinian territory i.e. the Gaza Strip and West Bank including Jerusalem, has exceeded its competence under international law, by unlawfully applying provisions of Israeli domestic law to prevent the entry of Rep. Rashida Tlaib (D-Mich.) and Rep. Ilhan Omar (D-Minn.), into the territory. This stands in stark violation of Israel’s limited competence as military occupant governing territory over which it does not have sovereign rights, as outlined under Article 43 of the Hague Regulations and Article 64 of the Fourth Geneva Convention. PHROC asserts that Israel’s denial of access to the US Congresswomen represents an annexationist measure. Israel is clearly overreaching the application of its domestic law to the OPT, violating the Palestinian right to self-determination, and gravely violating the personal rights of the Congresswomen to freedom of movement and freedom of expression and public assembly.

Rep. Rashida Tlaib (D-Mich.) and Rep. Ilhan Omar (D-Minn.) had intended to start their joint tour of the OPT on 18 August 2019. The tour was to be of a fact-finding nature, including visits to Hebron, Bethlehem, Ramallah and East Jerusalem to learn more about how Israel’s prolonged 52-year belligerent occupation, apartheid, colonization and annexation of the Palestinian territory affects the lives of the Palestinian people under its effective control. The tour was scheduled to include an in-depth and comprehensive introduction to Palestinian political and security dynamics, examining the humanitarian impact of funding cuts to UNRWA, meeting with young Palestinians to understand how US assistance can facilitate future youth employment, meeting with the American expat community to understand private sector challenges to developing the Palestinian economy, briefings on the impact of settlements and meetings with Bedouin communities with a visit to Khan al-Ahmar, a Palestinian community where Israel has issued demolition orders for the destruction of the entire village for Israeli settlement expansion.

Additionally, the Congresswomen planned meetings with East Jerusalem hospitals to learn about how Israeli movement restrictions impact Palestinian patient care. The Congresswomen had intended to visit religious sites in Bethlehem, meet with refugees and internally displaced persons in Deheisheh Refugee Camp, attend meetings to discuss prisoner rights and the impact of the Wall on Palestinian freedom of movement in Nabi Saleh, meet with respected Palestinian political representative Dr. Hanan Ashwari and professors from Birzeit University to understand how Israel’s denial of entry to foreign university professors contracted to teach is damaging higher level education in Palestinian educational institutions.

Despite the obvious political, economic and humanitarian nature of the delegation’s planned visit to the OPT, the Israeli Ministry of Interior, supported by the Israeli Ministry for Foreign Affairs and Prime Minister Netanyahu, denied the grant of access of the Congresswomen to Palestine, citing potential Boycott, Divestment and Sanction (BDS) activities which Israel has prohibited under its domestic law. Nevertheless, Israel not only extended the ban to entry to the occupied State of Palestine, the Prime Minister of Israel explicitly stated that the Congresswomen had “planned a visit whose sole objective is to strengthen the boycott against us and deny Israel’s legitimacy. For instance: they listed the destination of their trip as Palestine and not Israel”. While the conflation of the visit of a political delegation to Palestine as BDS activity, is itself a loose characterization and overly broad interpretation of what constitutes BDS, Amendment 28 of the Entry into Israel Law, narrowly prevents entry of persons making “active, continuous, and consistent” calls for BDS into Israel only.[1]

Critically, Israel controls all access points to the OPT, unlawfully applying Israeli domestic law to the entry of foreigners and Palestinians into the OPT. Access into the OPT to civilians is not a matter of military competence regulated by military orders, but rather is supposed to be a function of the local governing authority, in this case the Palestinian Authority. The previous laws on entry preceding the occupation continue to apply, i.e. the Ottoman, Jordanian and Egyptian laws, subject only to revision premised on the adoption of temporary military orders for the purposes of military necessity and humanitarian consideration. Critically, peaceful resistance BDS activities targeted at the belligerent occupant’s home State, does not meet the threshold of military necessity to permit the alteration of Palestinian domestic law or prohibit the entry of foreigners, including Rep. Rashida Tlaib (D-Mich.) and Rep. Ilhan Omar (D-Minn.), into the OPT. PHROC expresses deep concern that Israel, the military occupant, is unlawfully applying its domestic law to prevent the entry of foreigners and Palestinians into Palestine and underscores that it is the prerogative of the representatives of the OPT to determine entry.

Both Reps. Omar and Tlaib have in the past expressed their legitimate criticism of the State of Israel and support for the BDS movement. Although Rep. Tlaib was later offered the opportunity to enter the OPT to visit her 90-year old grandmother on “humanitarian” grounds it was subject to the strict condition that she not promote boycott of Israel while on her visit. According to Rep. Tlaib:

“the Israeli government used my love and desire to see my grandmother to silence me and made my ability to do so contingent upon my signing a letter – reflecting just how undemocratic and afraid they are of the truth my trip would reveal about what is happening in the State of Israel and to Palestinians living under occupation with United States support.n

PHROC supports Rep. Tlaib’s decision to not visit the OPT under the imposition of unwarranted and draconian silencing conditions, and emphasizes that BDS represents a non-violent form of resistance protected under international human rights law including the freedom of expression and assembly. In this respect, the European Union (EU) has explicitly reaffirmed the right to promote BDS activities as protected under the rights to freedom of expression and of association, enshrined in the EU Charter of Fundamental Rights.[2]

The ban on entry follows a pattern of similar repressive denials by Israel against UN mandate holders, including the denial of entry to Professor Michael Lynk, the United Nations Special Rapporteur (UNSR) on the situation of human rights in the Occupied Palestinian Territory (OPT) since 1967. The ban was similarly intended to frustrate his human rights documenting and monitoring work as mandated by the UN Human Rights Council to “investigate Israel's violations of the principles and bases of international law” in the OPT. The denial of entry of elected officials reflects Israel’s broader discourse on and policy towards institutions, organizations, and individuals that call attention to Palestinian rights and Israel’s violations of international law in the OPT.

Israel’s application of its domestic laws to the OPT must be immediately halted. Rep. Tlaib and Rep. Omar’s delegation must be granted immediate, unrestricted and unconditional access to visit the OPT, including access to the Gaza Strip.

[2] European Parliament, Parliamentary Questions, 15 September 2016, Answer given by Vice-President Mogherini on behalf of the Commission, available at: http://www.europarl.europa.eu/doceo/document/E-8-2016-005122-ASW_EN.html?redirect 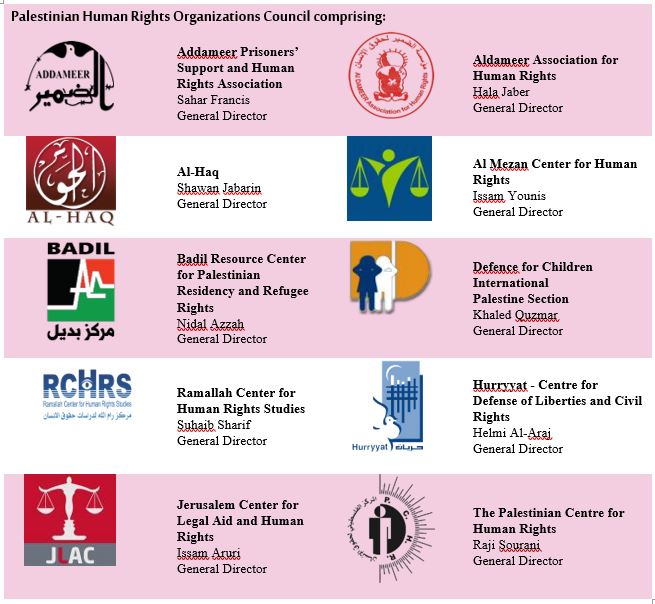