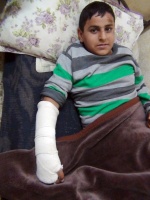 In the past week, Al-Haq documented a number of attacks by Israeli settlers against Palestinians and their property. These incidents resulted in the damage and destruction of more than 150 olive and almond trees across the West Bank. These settler attacks also involved physical assault. On 15 April, ‘Ala Dawoud Ya'ish, 25, and Sami 'Adnan Abu Siriyah were attacked by settlers from ‘Homesh’ after the vehicle in which they were travelling stopped in the vicinity of the settlement due engine problems. A group of 30 settlers surrounded and beaten ‘Ala who eventually managed to flee. ‘Ala reported bruises in his right shoulder and scratches over his abdomen. In addition, settlers from ‘Bracha’ and ‘Halamish’ attacked six Palestinian children between the ages of four and twelve.

On 16 April, at approximately 11:00 am, Fawwaz, 12, was walking his family’s sheep to an area north of Kufr Qalil, two kilometres south-east of the Israeli settlement of ‘Bracha.’ Fawwaz was 500 metres north of his village when a settler in religious Jewish clothing grabbed Fawwaz’s shoulder. The settler – who had long sideburns, wore a kippah, black trousers and a white shirt from which threads were hanging – began beating Fawwaz with a rifle. The settler repeatedly struck Fawwaz on the chest, causing the child to fall to the ground and hit his head against a stone. While recalling the incident, Fawwaz stated ‘I was terrified that the settler would kill me as I was alone in the area.’

Fawwaz, who was bleeding profusely from a wound on his head, tried to stand up and escape from the settler, but the latter caught him again. In addition to beating the boy on the face and chest, the settler also began to kick the 12-year-old child. When Fawwaz fell to the ground for a second time, the settler repeatedly kicked his right hand.

When Fawwaz managed to escape, the settler followed the boy and began to throw stones at him. After he reached his sister’s home, Fawwaz’s father was informed of the incident and took his son to the emergency unit at Rafidiya hospital in Nablus. There Fawwaz had a cast applied to his arm, after he was told that his wrist had been broken as a result of the attack, and received four stitches on his head. After receiving medical treatment, Fawwaz was taken home. (Al-Haq Affidavit No. 8551/2013)

On 15 April, at approximately 3:00 pm, Bashir, 49, was walking towards the village spring with his four sons and one of his nephews, aged between four and twelve. The spring is located to the east of Deir Nitham village and is about 400 metres from the fence surrounding the ‘Halamish’ settlement, which is situated on land that belongs to the neighbouring Palestinian village of al-Nabi Saleh.

When Bashir and the children arrived next to the spring, a car stopped on the side of the main road. Two settlers got out of the vehicle, walked towards the spring and shouted at Bashir to leave the area. One of the settlers grabbed the children and began slapping them in the face and kicking their legs and backs. When Bashir tried to separate the children from their assailant the other settler, who was carrying a handgun, aimed the weapon at him.

Bashir was trying to calm the children, who were crying and trembling from fear, when a second Israeli car stopped alongside the first. Another settler got out of the second car and told Bashir to leave immediately otherwise he would be attacked. At that point, an Israeli military jeep arrived on the scene and Bashir recounted the incident to the soldiers. The commanding soldier replied to Bashir that the spring belonged to the settlers and that Palestinians were not allowed to walk in the area surrounding it. Bashir denied the soldier’s statement and asked to have the settlers’ names and identity cards in order to file a complaint with the Israeli police, but the soldier refused.

Shortly afterwards, when a second military jeep arrived on the scene, another soldier ordered Bashir to leave the area, while a group of Palestinian men from Deir Nitham joined Bashir. A private security guard from ‘Halamish’ had also arrived and threatened to kill Bashir. After a soldier intervened, the security guard left but continued to make threatening gestures with his hands at Bashir. One of the military jeeps withdrew from the area while the other remained to monitor the situation. Bashir and the other Palestinian men remained in the area until the soldiers forced both the settlers and the Palestinian residents to leave. The five children involved in the incident did not report any serious injuries. (Affidavit N. 8552/2013)

The following day, Sa’id Sabri al-Tamimi, another resident of Deir Nitham, found that 120 of his olive and almond trees had been damaged with saws. Given the proximity of ‘Halamish’ and the confrontation that had taken place the previous day, Sa’id believes that settlers from ‘Halamish’ are responsible for the attack.

Al-Haq condemns all incidents of settler violence against Palestinians carried out in a climate of total impunity and expresses its grave concern at those assaults perpetrated against children. According to UNICEF figures, 18 children (13 boys, 5 girls) were injured by settlers in 2012, with a further 21 children injured as a result of the Israeli military’s intervention in settler-related incidents. As the Occupying Power, Israel is under the legal obligation to ensure the well-being and safety of the occupied population, including by investigating and prosecuting those responsible of assaulting Palestinians. In addition, Israel must comply with its human rights obligations towards the occupied population, such as those set forth in the Convention on the Rights of the Child, which Israel ratified in 1991.