On 5 June 1967, the Six-Day War erupted between Israel and the neighbouring Arab States. By the end of the war, Israel had occupied the West Bank and the Gaza Strip, forcibly transferring 430,000 Palestinians. Of those transferred, 193,500 were made refugees for a second time, having already been forced to flee their homes during the Nakba of 1948. During the 1967 conflict, Israel expropriated more than 400 square kilometres of Palestinian land. Palestinians living in the border region with Israel were, and continue to be, particularly vulnerable to land expropriation, property destruction, arbitrary dispossession and forcible transfer by the Israeli authorities. Such was the fate of the villages of ‘Imwas, Yalo and Beit Nouba, located in the Latroun area, approximately 20 kilometres north-west of Jerusalem. At the outbreak of the 1967 conflict, around 10,000 Palestinian residents were forcibly transferred, their villages entirely destroyed and their land appropriated by Israel. 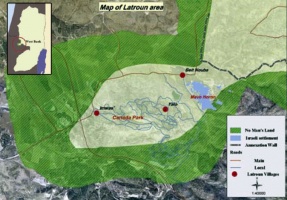 Forty-six years later, Israel is still the Occupying Power in the West Bank, including East Jerusalem, and the Gaza Strip. For decades, the Israeli authorities have adamantly denied the Palestinian people’s right of return, as well as their right to reparation for the forcible transfer of 1967. Approximately 6,000 Palestinians originally from the Latroun area are currently refugees in the West Bank and an additional 48,000 descendants of former Latroun residents are part of the Palestinian Diaspora.

Ahmad, who was 12 years old at the time of the Six-Day War, recalls that, on 5 June 1967, rumours of an impending Israeli invasion were spreading amongst the residents of Beit Nouba village. On the morning of 6 June, Ahmad and his family fled their home after becoming aware that the Israeli troops had invaded the neighbouring villages of ‘Imwas and Yalo and forced the residents to leave the area. The ‘Isa family, which comprised of nine people, along with four of Ahmad’s cousins, left their native village and began to walk towards Beit Liqiya village – currently located in Ramallah governorate – in the belief that they would return home at the end of the hostilities.

From Beit Liqiya, the ‘Isa family moved to the neighbouring village of Beit Diqqo where they stayed with a family friend. A few days later, the family set off towards Ramallah, enduring taunts from Israeli soldiers along the way. Ahmad’s family arrived at a school in Bitouniya, Ramallah governorate, where many families from Yalo and ‘Imwas had taken refuge. As soon as Ahmad and his family arrived, the Israeli military besieged the school and forced all the displaced Palestinians into the school playground. Some soldiers aimed their weapons at people’s heads, but fortunately did not shoot at them.

Frightened by this experience, Ahmad and his family continued to flee towards Ramallah and found shelter in a house in the Batn al-Hawa area. The family stayed in the house for five days for fear of being attacked by the Israeli army. Later in June, Israeli soldiers began announcing in Arabic that Palestinians could return to their villages. Immediately, Ahmad’s family began to walk back to Beit Nouba. After two days of walking, they arrived in Beit Sira where they were stopped by Israeli soldiers and forbidden from proceeding to Beit Nouba. While the rest of the family remained in Beit Sira, Ahmad and his father, ‘Ali, managed to enter their village and sneak into their home to collect mattresses and food for the family.

On the way to the village Ahmad and ‘Ali saw the corpses of ten men and three women, all residents of Beit Nouba. Amongst them, Ahmad recognised the body of Mahmoud ‘Ali Baker, who was blind and had been killed when his house was demolished with him inside. (Affidavit 2494/2005) 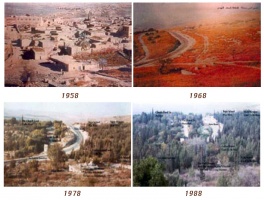 Following the 1967 conflict, the Palestinian residents of the Latroun area were rarely allowed to access their property, which had been entirely appropriated by the Israeli authorities. In order to impose permanent control over the area, the Israeli settlement of ‘Mevo Horon’ was established in 1970 over the ruins of the village of Beit Nouba. In 1973, Canada Park, a recreational area for Israeli citizens extending over 7,000 dunums, was created where the destroyed Palestinian villages of Yalo and ‘Imwas had once stood. In 2002, the Annexation Wall began to encircle the Latroun area, which is today entirely closed off from the rest of the West Bank.

After being forcibly transferred, Ahmad’s family finally found stable shelter in Beit Sira. The first year following the 1967 conflict was extremely difficult for the family. Establishing a new source of income and integrating into the village were the most difficult challenges. After graduating from the Arabic Institute for Architecture in Ramallah, Ahmad worked as an architect and moved to Bitouniya in 1992, where he now lives with his family of 10. Following the 1967 conflict, the Israeli authorities appropriated the 100 dunums of land owned by Ahmad’s father in Beit Nouba and have since denied him access to his land. Ahmad also owned property located in Beit Liqiya that had belonged to his father and included nine dunums of agricultural land. There, he planted 120 olive trees in 1987. However, since the construction of the Annexation Wall began, he has been denied any access to this land. In addition, in 2008 and 2010 settlers from ‘Mevo Horon’ burnt all of his trees.

Israel’s policies of forcibly transferring the protected Palestinian population off their land, and the extensive destruction and appropriation of their property without military necessity, amount to grave breaches of the Fourth Geneva Convention, which are some of the most serious forms of war crimes. Al-Haq firmly condemns the severe violations of international law that occurred in 1967. Such violations have continued to be perpetrated for over 46 years, allowing Israel to annex Palestinian land and exploit Palestinian natural resources for the sole benefit of its own citizens – primarily settlers – while simultaneously denying the Palestinian people their right to self-determination.

For more information on the Latroun area, please refer to Al-Haq’s study Where Villages Stood. Israel’s Continuing Violations of International Law in Occupied Latroun, 1967-2007. In addition, Al-Haq’s documentary Memory of the Cactus tells the story of Aisha Um Najeh, a resident of Yalo, who was forcibly transferred in the same manner as Ahmad Ali Muhammad ‘Isa.