Main Menu
Collective Punishment in Jenin and Nablus
Latest Topics
Al-Haq and partners deliver an oral intervention at the 45th session of HRC on rights to safe drinking and sanitation
Open Letter: UAE and Bahrain’s Normalisation with Israel Incentivises Continued Colonisation of Palestine
Al-Haq Sends an Urgent Appeal Concerning Israel’s Tightening Restrictions and COVID-19 Outbreak in Gaza
Al-Haq Condemns Designations of International Criminal Court Prosecutor and Staff for Sanctions under US Executive Order 13928 as a Direct Threat to Justice in the Situation in the State of Palestine
Addameer and Al-Haq Send a Written Submission on Israel’s Failure to Protect Palestinian Prisoners Amidst COVID-19 Outbreak
Palestinian and Regional Human Rights Organisations Send Joint Written Submission on Gaza Ahead of the 45th Human Rights Council Session
Collective Punishment in Jenin and Nablus
- [29 January - 6 February] - Ref.: 27/2018
12، Feb 2018 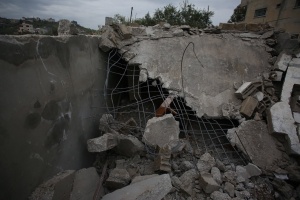 Between 9 January 2018 and 6 February 2018, the Israeli Occupying Forces (IOF) orchestrated a campaign of collective punishment measures across Jenin and Nablus. On 9 January 2018, Palestinians opened fire at an Israeli settler vehicle near the settlement of Jifat Gilead, south of Nablus, killing settler Raziel Ben Elana, 35. Following the incident, the IOF confiscated surveillance cameras along the road connecting Nablus and Jenin, including Hadad, Qabatiya, and Al-Yamoun villages in Jenin, among other locations.

On 17 January 2018, the IOF carried out an extensive operation in Jenin, particularly Wadi Burqin, in search of Ahmad Nasr Jarrar, 22, who Israel claims to have killed the settler on 9 January. Instead, Israel killed his cousin, Ahmad Ismail Jarrar, 31. In a month of brutal reprisals, Israel orchestrated a series of attacks against the extended family members of the Jarrar family and the broader communities of Jenin and Nablus. Acts of collective punishment documented by Al-Haq during this period include widespread movement restrictions, punitive house demolitions, attacks using police dogs, arrests, indiscriminate killings, and the retention of bodies of the deceased.

As Israel continued the search for Ahmad Nasr Jarrar, Al-Haq monitored severe movement restrictions across the West Bank. On January 30, at approximately 07:30 am, the IOF positioned at Al-Hamra checkpoint in the central Jordan Valley tightened procedures for searching and checking identities and imposed extensive delays on civilians.1 On the same day, at approximately 16:30, Israeli soldiers erected a temporary checkpoint at the entrance to the northern village of Al-'Oja. The following day, on February 1, at approximately 11:00 am, the IOF erected a flying checkpoint at the entrance to Kufr Zan village, west of Jenin.2 Again Israeli soldiers searched the identity cards of citizens in all directions, causing severe traffic congestion, especially as there are no alternative roads linking Kufr Zan and nearby villages and towns towns in the city of Jenin.3 On February 2, at approximately 17:30, further tighter restrictions were placed on the Tayasir checkpoint, which separates Toubas from the northern Jordan Valley. Meanwhile on February 3, at approximately 19:30, Israeli soldiers erected a checkpoint on the main road between the villages of Jouret Al-Sham’aa and Um Salmouna, south of Bethlehem. Soldiers searched the identities of Palestinians and searched their vehicles, causing long traffic jams which continued late into the day.4

On 17 January 2018 the IOF demolished four houses belonging to members of the extended Jarrar family in Wadi Burqin, west of Jenin refugee camp. The demolitions forced the displacement of four families, totaling 17 individuals, including three children. The houses were demolished without allowing time to remove any contents.

On February 3, the IOF launched a large-scale military operation in the eastern neighborhood of Burqin, which lasted for about six hours in search of Ahmed Nasr Jarrar. At 2:30 pm that day, the IOF stormed the town of Burqin with two military bulldozers and a military jeep and surrounded the family home of ‘Afif Mustafa ‘Ateeq, his wife and four children. In a second apartment, Mustafa Mahmoud Abd al-Rahim, his wife, and 7-year-old and 2-year-old children live, while the third floor is home to Majdi Mustafa ‘Ateeq, his wife and 6 month old baby. The IOF fired shells and bullets into the building partially destroying it. Inside the building, the IOF destroyed much of the contents of the apartments.5 Outside, the IOF destroyed three sheep barracks. The IOF then arrested ‘Afif and Majdi.

On 3 February, the IOF intensified a surge in violence and collective punishment measures, encompassing numerous house raids in the village of Al-Kafeer, Jenin, attacking civilians with police dogs while demanding the surrender of Ahmad Nasr Jarrar. Moreover, on that day at approximately 06:00 am, Israeli military troops fired several shells at the family home of Mabrouk Mahmoud Jarrar, 40, where he lives with his wife and two children, aged 9 years old and 5 years old respectively, in Al-Jabriyat neighborhood in the town of Burqin west of Jenin. After blasting through the main door, the IOF entered the second floor with a police dog, where the family home is located. The IOF set the police dog upon Mabrouk Jarrar, and the dog proceeded to attack him, biting him in the left shoulder. The dog dragged Mabrouk Jarrar down the stairs, from the second floor to the first floor, in front of his wife and two children. Mabrouk’s wife pleaded with the IOF to free her husband from the dog. However, the IOF refused bargaining, "hand us Ahmed Jarrar to save your husband from the dog."6 The IOF continued to search the premises and after this, arrested Mabrouk Jarrar.

Between 9 January and 6 February 2018, the IOF conducted numerous house raids across villages and towns in Jenin, especially those belonging to members of the Jarrar family or their close relatives. Witnesses describe how the IOF conducted raids across the West Bank calling for the death of Ahmad Nasr Jarrar; “during the inspection of the apartments…they threatened to kill Ahmed Nasr Jarrar if he was found”.7

On 19 January 2018, Al-Haq documented the IOF raid of an apartment block containing six apartments in Al-Zahra in Jenin. Twenty armed IOF raided the family home of Muhammad Sharif Zaid where he lives with his wife and two children aged 7 and 4, pointing weapons at the family. Zaid relayed how the soldiers had also raided the other apartments, detaining his father, mother, brothers and sisters in the living room.8 The family were interrogated about their relationship with Suhaib Nasr Jarrar, the brother of Ahmad Nasr Jarrar. The IOF confiscated the families’ phones and cameras. In the aftermath of the raid, Zaid describes: “my children are afraid to stay alone in their own bedroom and insist on sleeping in my room and in my presence because they fear that the Israeli soldiers will break into my house again”.9

Al-Haq documented two killings during the pursuit of Amhad Nasr Jarrar. On 17 January 2018, the IOF killed Ahmad Ismail Jarrar during an armed clash that took place when 120 IOF vehicles raided the neighbourhood of Wadi Burqin. The IOF withheld his body after the operation. On February 3, at approximately 20:30, Ahmed Samir Abu 'Obeid, 19, was shot and wounded by an Israeli soldier during clashes in Wadi Burqin, west of Jenin. ‘Obeid was taken to Jenin hospital and then to Al-Razi hospital. Doctors tried to save his life but he died of a head injury.

On 5 February 2018, at approximately 11:00, Al-Haq documented the presence of four military jeeps and a number of Israeli soldiers in a location near the Annexation Wall, near a building owned by Nabil Muhammad Abu Seifin, wherein Bassam Muhammad Abu Seifin, Nabil’s brother, and his family, reside. Later, an Israeli bulldozer arrived at the location. On 6 February 2018 in the early morning, Bassam recalls hearing loud explosions, thought to be tear gas canisters next to his building.10 Five minutes later, he heard approximately 10-15 bullets fired. There was no calls for anyone to surrender. At approximately 5:30 that morning, the shooting stopped. He saw a partially demolished building and the military bulldozer.11 Bassam then witnessed a body, covered in a white sheet being carried by two Israeli soldiers. A remote controlled robotic device examined a red coloured bag at the scene. A soldier then placed the bag inside one of the military jeeps.12 After the military left the site, Bassam saw blood stains on the dirt and the remnants of bone and what appeared to be remnants of the ‘brain’ of a person. Later that day, the Governor of Jenin, confirmed the death of Ahmad Nasr Jarrar, 22.13

Al-Haq condemns the collective punishment measures indiscriminately inflicted on the protected Palestinian population during the month long hunt for Ahmad Nasr Jarrar. Critically collective penalties, such as mass deprivation of freedom of movement, mass arrests, punitive house demolitions and reprisals against the civilian population are prohibited by Article 33 of the Fourth Geneva Convention, which is also considered a rule of customary international law.14 In particular, the demolition of private property is strictly prohibited under Articles 46 of the Hague Regulations which guarantees the respect and protection of private property and Article 53 of the Fourth Geneva Convention which prohibits property destruction.15 Notably, destruction of property, not requirement by military necessity, may amount to a grave breach of the Fourth Geneva Convention and a war crime, subject to prosecution in the International Criminal Court. Additionally, the deliberate use of the dog to attack a civilian during an arrest operation may amount to cruel, inhuman, degrading treatment and punishment, in violation of Article 1 of the Convention Against Torture, and Article 7 of the International Covenant on Civil and Political Rights (ICCPR).

Al-Haq further deplores the shoot to kill policy which Israel continues to employ and reminds Israel of its law enforcement obligations under Article 6 of ICCPR, to use no more force, than absolutely necessary. The killing of Ahmad Nasr Jarrar was praised by the highest echelons of the Government of Israel. Prime Minister Netanyahu warned that “Security forces will get to anyone who tries to harm Israeli citizens, and we will see that justice is served. A few days ago I told Rabbi Raziel Shevach’s wife that we would get to the murderers, and last night the mission was completed.”16 Israeli Defense Minister Lieberman, stated "The score has been settled. We appreciate and salute the security forces who in a complex operation and with courage fought for our security this morning."17 The barrage of bullets fired at Ahmad Nasr Jarrar, in the absence of a precaution, coupled with the previous calls by soldiers during the raids across the West Bank and Israeli official statements, calling for the killing of Jarrar and praising it, indicate that more force may have been employed than was absolutely necessary and which further may amount to a pre-planned case of ‘shoot-to-kill’. Notably shoot-to-kill policies are prohibited under international law.18 Al-Haq further condemns the unnecessary and disproportionate use of force that Israel engages in clashes resulting in the deaths of Ahmad Ismail Jarrar and Ahmed Samir Abu 'Obeid.