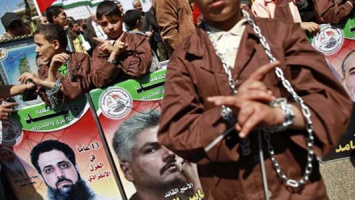 As Palestinians mark an emotional Prisoner's Day, the Israeli authorities are currently coercing Samer al-'Issawi to accept a deal that would see him deported to a United Nations (UN) Member State in exchange for ending his hunger strike. Samer has repeatedly refused to accept any such deal, which constitutes a grave breach of the Fourth Geneva Convention and therefore qualifies as one of the most serious war crimes. As an organisation dedicated to the promotion and protection of Palestinian human rights, Al-Haq would like to take the opportunity of Palestinian Prisoners' Day to condemn, in the strongest terms, Israel's repeated use of deportation rather than addressing the legitimate concerns of Palestinian prisoners. Equally, Al-Haq denounces the willingness of the international community to condone, and sometimes support, the deportation of Palestinian detainees. Such readiness to ignore international law and the automatic inclination to seek short-term political solutions to long-term abusive practices contribute to the prolonged nature of the occupation of Palestine by encouraging additional violations by Israel.

At present, three of the most emotive issues for Palestinians in the Occupied Palestinian Territory (OPT) are settlements, the illegal closure of the Gaza Strip and the fact that more than 4,500 Palestinian political prisoners are languishing in the Israeli prison system. Lack of a fair trial and denial of due process, forcible transfer and deportation1, physical and mental mistreatment and torture, medical neglect and violations against children are all everyday aspects of the Israeli prison experience for Palestinians.

Since 1967, more than 650,000 Palestinians have been detained by Israel. Last week alone, Israel arbitrarily arrested 44 Palestinians. Not only are Palestinians under constant threat of arrest and denied fair trials in Israeli military tribunals, they are also systematically abused while in detention. In the 46 years since the occupation began, 203 Palestinians have died in Israeli detention centres, at least 71 as a direct result of torture. Today, 178 Palestinians are being held in administrative detention without charge or trial or any indication as to when they will be released.

In the past year, hundreds of prisoners have embarked on hunger strikes to demand their most basic rights. Israel's default response to prolonged hunger strikes has been to deport or forcibly transfer those involved, a move that is invariably supported by the European Union and the rest of the international community. Most recently, both Hana Shalabi and Ayman Sharawna were forcibly transferred to the Gaza Strip. In the October 2011 prisoner exchange, Israel forcibly transferred 18 West Bank prisoners to the Gaza Strip for a period of three years while an additional 146 were forcibly relocated there on a permanent basis as part of their release. Another 41 prisoners were deported outside of the OPT. In 2002, 39 Palestinians were deported or forcibly transferred following the siege on the Church of the Nativity in Bethlehem. Several of them are still living in Europe, unable to return to their homes or families today, more than ten years later. Greece, Ireland, Spain, Italy, Belgium, Portugal and Turkey are amongst those countries that have accepted Palestinian deportees in the past.

The terms of these expulsions violate Article 49 of the Fourth Geneva Convention, which prohibits the forcible transfer and deportation of protected persons, a proscription that is part of customary international humanitarian law. In addition, the Rome Statute of the International Criminal Court (Rome Statute) lists the deportation or transfer of persons in a situation of armed conflict as a war crime. Given the stark asymmetry in power between the occupied Palestinian and occupying Israeli parties involved, neither the potential "consent" of the prisoner, nor the fact that these deals may have been negotiated by a Palestinian authority can serve as justification for the deportation, as this contravenes the spirit of Articles 7, 8 and 47 of the Fourth Geneva Convention concerning the inviolability of the protections afforded by the Convention.

Forcible transfer and deportation are two amongst a multitude of abusive practices that Palestinian prisoners are subjected to by Israeli authorities. Of particular concern is Israel's policy of violently arresting Palestinian children in the middle of the night and interrogating them without the presence of parents or lawyers. According to Defence for Children International, 75 per cent of Palestinian child detainees experience ill-treatment during arrest, interrogation and pre-trial detention. A recent UNICEF report identified numerous examples of practices in detention that amount to cruel, inhuman or degrading treatment or punishment according to the Convention on the Rights of the Child and the Convention against Torture. In one recent example, a 15-year-old Palestinian boy was held in solitary confinement, in a room where the light was left on 24 hours a day, for three days following his arrest. When he returned home his hands were trembling and he is now constantly nervous and reluctant to leave his house. Hundreds of Palestinian children across the OPT have endured similar abuses.

Already in 2013, Al-Haq has documented incidents where children were threatened with torture and prolonged imprisonment by Israeli soldiers in an effort to extract confessions and information during interrogation. Information extracted under this type of pressure is then used as a basis for further arrests and is intended to weaken the fabric of Palestinian society.

The absolute prohibition against torture is a peremptory norm of international law and "has now become one of the most fundamental standards of the international community"2. Torture is also recognised as a war crime under the Rome Statute, in addition to having permissive universal jurisdiction according to customary international law, which allows any State to prosecute those accused of torture, regardless of their nationality. However, since 2001, there have been more than 750 complaints of torture and ill-treatment against the Israeli Security Agency (ISA). Not one complaint has resulted in a criminal investigation. Arafat Jaradat, a 30-year-old Palestinian man, died on 23 February 2013 as a direct result of torture and ill-treatment inflicted while in Israeli custody. Demands made by UN representatives as well as Israeli and Palestinian organisations for a full and transparent investigation into his death have been completely ignored by Israeli authorities, who have long implemented a process that grants full impunity to those who commit torture against Palestinians.

Al-Haq views the ongoing abuse of Palestinian detainees in Israeli prisons as a microcosm of Israel's prolonged occupation of Palestine, in that it is illustrative of the utter contempt with which Israel views both Palestinian rights and international law. Furthermore, Israel is using political prisoners as a bargaining tool in its engagement with Palestine and the international community.

Forcible transfer and conditional release cannot be an alternative to Israel ending its practice of administrative detention and the systematic denial of the rights of Palestinian detainees. The denial of the right to a fair trial is a grave breach of the Fourth Geneva Convention, to which no detainee should ever be subjected. Nor should detainees be denied family visits under any circumstances. According to the Israeli authorities, "the test of a democracy is how you treat people incarcerated in jail, and especially so with minors." In this regard, Israel is failing miserably. It is simply not acceptable that Palestinian children are regularly subjected to solitary confinement, physical and psychological abuse, sleep deprivation and interrogation without the presence of a parent or lawyer. It is imperative to demand a permanent resolution to Israel's practice of arbitrary detention, and the gross ill-treatment of detainees, especially minors, in compliance with international humanitarian and human rights law.

1- Under international humanitarian law, both deportation and forcible transfer are illegal. Under international criminal law, persons who engage in these practices incur individual criminal responsibility. The material difference between them is the place of destination – deportations are to a destination outside of the borders of the territory of residence, while forcible transfers are to a destination within the borders of the territory of residence.