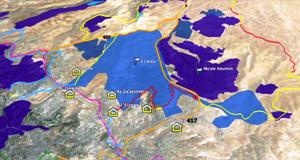 Al-Haq is gravely concerned by reports from the Office for the High Commissioner of Human Rights (OHCHR) indicating that the Israeli authorities issued eviction orders on 28 April to a number of families belonging to Bedouin and herder communities in Sateh al-Bahr, located in the “E1” area. The eviction orders reportedly gave the families 48 hours to leave their homes permanently, or face eviction and confiscation of their livestock.

The “E1” area is a twelve square kilometre plot of land located in the West Bank, to the east of the Jerusalem municipal boundary and bordering the Ma’ale Adumim settlement, which is illegal under international law. The close proximity of the “E1” area to the Ma’ale Adumim settlement makes it an attractive location for significant expansion of what is already the third most populated settlement in the Occupied Palestinian Territory (OPT). The “E1” area stretches across 22,000 dunums of confiscated Palestinian land and provides a vital passage joining the northern and southern sections of the West Bank, as well as Jerusalem. The closure of this passage through settlement expansion would effectively cut the West Bank in half and seriously impede the realisation of the Palestinian right to self-determination.

As the Occupying Power, Israel is bound by international humanitarian law, which prohibits individual or mass forcible transfers. While the Occupying Power is permitted to totally or partially evacuate a given area if the security of the population or imperative military reasons so demand, this evacuation cannot be permanent and the evacuated persons must be transferred back to their homes as soon as hostilities in the area in question have ceased. In the case of Sateh al-Bahr, the eviction orders are considered part of a concerted strategy by the Israeli authorities to transfer Palestinian Bedouin and herder communities out of the “E1” area and the Jordan Valley, allowing for the expansion of nearby settlements. This is illustrated by the demand that the families leave their homes permanently. As such, the eviction orders issued by the Israeli authorities violate Article 49 of the Fourth Geneva Convention. Violations of this provision are listed as war crimes by the Rome Statute of the International Criminal Court (ICC), thereby giving rise to the individual criminal responsibility of the perpetrators. In addition, threats to confiscate the livestock of the families violate Article 46 of the Hague Regulations, which forbids the confiscation of private property by the Occupying Power.

Israel is further bound by its obligations under international human rights law when conducting activities in the OPT, as has been confirmed by the International Court of Justice 2004 Advisory Opinion on the Legal Consequences of the Construction of a Wall in the Occupied Palestinian Territories. Forced evictions violate a number of international human rights law norms, including the right to an adequate standard of living, the right to adequate housing and the right to not be subjected to arbitrary or unlawful interference with privacy, family and home.

Al-Haq demands that the Israeli authorities withdraw the eviction orders against the Sateh al-Bahr families and cease their unlawful practice of forcibly transferring protected persons from their lands and transferring parts of their own civilian population into the OPT. Al-Haq calls upon the international community to take measures in line with their own obligations under international law to ensure that the construction and expansion of settlements in the West Bank, along with other violations of international law carried out by Israel, are immediately ceased and that the perpetrators of these crimes are held to account. Al-Haq also calls on the Palestinian leadership to pursue accountability mechanisms, including accession to the Rome Statute, which would deter Israeli government officials from pursuing such policies.