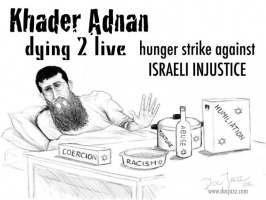 The plight of Khadr Adnan highlights the injustice of Israel’s administrative detention policy. 37-year-old Khadr has been held under administrative detention since August 2014. He is a resident of 'Arraba, Jenin, married to Randa Mousa, 36, and a father of six children; Ma'ali, 6, Bisan, 4, Abd Al-Rahman, 3, and the triplets Muhammad, Ali, and Hamza, 1.

On 6 May 2015, Khadr commenced another hunger strike against his prolonged administrative detention which has been extended three times since his last arrest. Khadr was imprisoned in Hadarim Prison in Israel and was transferred to Al-Ramla prison hospital on 19 May due to his continuously deteriorating health condition.

Al-Haq condemns Israel's policy of administrative detention against Palestinians which violates international human rights law (IHRL) and international humanitarian law (IHL). According to IHL, the Occupying Power is permitted to detain persons as long as the reasons for internment are exceptional and each case must be decided individually. Administrative detainees have the right to have their detention reconsidered by an appropriate court or administrative board at least twice a year[1]. Also, the detainees must be held within the frontiers of the occupied territory itself. Under IHRL, individuals have the right to be informed of the charges against them at the time of arrest, be brought promptly before a judge, challenge the lawfulness of the detention, and the right to access a lawyer among other rights, amongst other due process and fair trial rights. Al-Haq demands that Israel immediately ends its illegal practice of administrative detention and calls for the release of all administrative detainees.