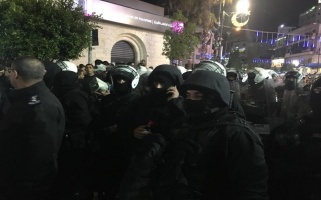 On Wednesday 13 June 2018, Palestinian security forces and their agents,[1] including officers dressed in civilian clothes, forcefully suppressed and dispersed protestors in Ramallah city centre. On that day, tens of demonstrators, as part of an independent popular movement, had gathered again to protest Palestinian Authority sanctions imposed on the Gaza Strip, including the cutting of wages of thousands of employees, refusing to pay the electricity bill and restricting healthcare referrals, among others.

In order to prevent the demonstration from taking place, the Advisor to the President for Governorate Affairs issued a warning earlier on 13 June 2018, ‘prohibiting the issuance of licenses for protests or assemblies that would hinder people’s movements and normal life during the holiday.’ Such decision by the Palestinian Authority is unlawful and may amount to a constitutional crime as prescribed in Article 32 of the Palestinian Basic Law. On that evening, Palestinian military jeeps and security vehicles arrived to Ramallah city centre, where more than 100 military and security personnel, including masked men and officers in civilian clothes, had gathered in preparation to suppress the peaceful demonstration.

At approximately 9:30 pm, Palestinian security forces and their agents attacked the demonstrators and dispersed them using tear gas, sound grenades, and pepper spray indiscriminately. The forces beat and physically assaulted demonstrators, injuring at least 10 who were transferred to hospital.[2] In addition, the security forces prevented the visual documentation of the incident, including by journalists,[3] and confiscated the phones and devices of individuals who were taking pictures or videos. Al-Haq documented the injury of Maisa’ Al-Khatib, 57, by Palestinian security officers during the demonstration. She received injuries to her left leg caused by a sound grenade canister and suffered an asthma attack due to tear gas inhalation.

“…I heard screaming, but I was not able to understand why people were screaming, until I felt a sound grenade hit my left leg and explode. Following the sound grenade explosion and leg injury, I inhaled tear gas, although I could not see the tear gas bombs near me, I managed to see the gas in the air and feel it while inhaling. I instantly felt pain in my chest and had problems breathing properly. I was having an asthma attack when two of the demonstrators escorted me over to an ambulance.

….an officer approached me at the hospital and requested that I give him my full name. I did and he wrote it down on a white piece of paper. At 23:00 the same day, following my release from the hospital, I was held in a police room situated within the hospital complex and underwent an interrogation by the same police officer regarding my presence at the demonstration. During this time, he excused the PA’s actions against civilians in Gaza. The officer failed to read me my rights and he did not record or write down the details from the interrogation. He finally returned my national identification card, after confiscating it when I first entered the hospital. I was released without paper work or any other form of documentation…I am currently unable to work, as an actor and stage coach, due to my injury…” [4]

At least 56 demonstrators were brutally and arbitrarily detained and assaulted, including the staff members of human rights organisations. It is worth noting that members of the Palestinian Authority’s security services, dressed in civilian clothes and wearing identical caps, also carried out arbitrary detentions and assaults. Regrettably, incidents of sexual harassment, both verbal and physical, were perpetrated by the Palestinian security officers and their agents against female protestors, while suppressing the demonstration 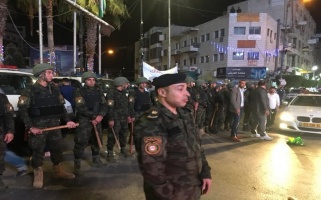 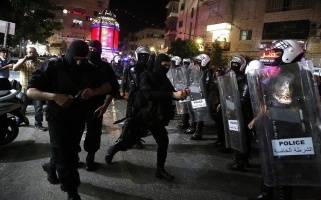 Al-Haq strongly condemns the Palestinian Authority’s decision to prohibit the demonstration, as well as the security forces’ excessive and unnecessary use of force against the peaceful demonstrators to suppress the demonstration – all of which in stark violation of all human rights standards guaranteed by national and international law. The right to peaceful assembly is enshrined in Article 26 of the Palestinian Basic Law and Article 21 of the International Covenant on Civil and Political Rights (ICCPR) which Palestine acceded to without reservations in 2014. The right to freedom of opinion and expression is guaranteed by Article 19 of the Palestinian Basic Law, whereas Article 32 of the Basic Law states the violation of freedoms, including freedom of expression and freedom of the press, is a criminal act punishable by law.

In light of this, Al-Haq warns against the suppression of peaceful protests by the Palestinian Authority merely on the basis of their demands, as they constitute a stark breach to right to freedom of opinion and expression. On 13 June 2018, the same day the protest was suppressed in Ramallah; tens of Palestinians participated in a demonstration, in support of President Mahmoud Abbas and the Palestinian Authority, in Nablus that went uninterrupted by the Palestinian security forces, in spite of the aforementioned warning mentioned issued by the Advisor to the President for Governorate Affairs.

Al-Haq calls on the Palestinian Authority to carry out immediate, independent, impartial, and effective investigations into the incidents of 13 June 2018 in Ramallah and hold perpetrators to account. Al-Haq calls on the Palestinian Authority to take the necessary appropriate measures with the concerned persons, including the Prime Minister, the Minister of Interior, the Director General of the Palestinian Police, and the Advisor to the President for Governorate Affairs, with regards to their negligence in the protection of civilians, participation and commission of serious human rights violations on 13 June 2018. Al-Haq further condemns all sorts of intimidation techniques and incitement against peaceful demonstrations and warns against the potential serious repercussions should such incitement not be addressed and stopped immediately.

[1] The forces in this protest as monitored by Al-Haq include: the Palestinian Police, the General Intelligence Service, the Preventive Security Service, and the Palestinian National Security Service. Al-Haq also monitored a group of officers dressed in civilian clothes who were wearing white hats, moving in an organised manner, and who carried out arrests, beatings, and harassed the protestors.

[3] On 13 June 2018 at 11:11 pm, the Palestinian Journalists Syndicate issued a statement condemning the Palestinian security services’ attacks against journalists while covering the demonstration in Ramallah. Statement in Arabic available at: https://www.facebook.com/yousef.maharmeh.71/posts/223925295058070