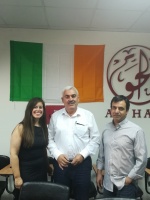 In 2016, UN Security Council Resolution 2334 called upon all States to “distinguish, in their relevant dealings, between the territory of the State of Israel and the territories occupied since 1967” in light of the flagrant violation of international law constituted by Israel’s settlement enterprise. The Control of Economic Activity (Occupied Territories) Bill 2018 ensures that Ireland is in compliance with its international law obligations not to recognize or give effect to Israel’s unlawful settlement enterprise. Furthermore, it ensures that Ireland is respecting and ensuring respect as a third party State to the Fourth Geneva Convention, to prevent and put an end to the destruction of Palestinian property, appropriation of lands, exploitation of natural resources, and the forcible transfer of Palestinians from and transfer of Israeli settlers into unlawfully acquired Palestinian properties and land.

The recent relocation of the United States embassy to Jerusalem, in breach of the special international status of Jerusalem as a corpus separatum represents a grave threat to the legal status of Palestinian territory. Israel has also tabled a number of legal bills in the Knesset, such as the so-called “Greater Jerusalem” bills which aim to absorb the unlawful settlements into the Jerusalem municipality, to annex West Bank territory and radically alter the demography of Jerusalem, to achieve a Jewish majority and Palestinian minority in the city. Furthermore, Israel has introduced legislation to directly revoke the permanent residencies of Palestinians in Jerusalem, which the Israeli Ministry of Interior considers have breached allegiance to the State of Israel. These measures represent a direct attempt by Israel to unilaterally alter the character, legal status, and demographic composition of the occupied Palestinian territory, in violation of the Palestinian right of self-determination and permanent sovereignty over their natural wealth and resources.

In Gaza, Israel continues to use unnecessary, excessive and disproportionate force against unarmed Palestinian protesters in violation of their right to life, amounting to war crimes of willful killing and grave breaches of the Geneva Conventions within the jurisdiction of the International Criminal Court. Since 30 March 2018, Al-Haq has documented the killing of 147 Palestinians in the occupied Gaza Strip by Israeli occupying forces, including 113 killed while protesting for their right of return, the end of the unlawful closure, and their right of self-determination in the Great Return March.

Meanwhile, Israel has ordered the eviction of the entire community of Khan Al-Ahmar and on 4 July 2018, Al-Haq documented the demolition of nine houses and four animal sheds in the Abu Nuwwar Bedouin village, leading to the forcible displacement of 52 individuals including 34 children. Both Abu Nuwwar and Khan Al-Ahmar are located in the so-called “E1 area” which Israel has designated for settlement expansion to absorb and illegally annex large settlement blocs such as the residential settlement of Ma’ale Adumim and the industrial settlement of Mishor Adumim into the Jerusalem municipality. Israel’s colonization and annexationist measures are fueled by profits from its unlawful settlement activity in the West Bank, including East Jerusalem, appropriating Palestinian public, private, and agricultural lands for residential, industrial, and agricultural settlements and assigning further land for nature reserves and military training areas, which will be used for future settlement expansion. Both Israeli and international corporations are located in the unlawful settlements and profit from Israeli State incentives to maintain their operations there.

Unlawful settlement goods are exported directly to international and European markets. The European Union (EU) is Israel’s largest trading partner, accounting for approximately €32 billion per year – including €300 million from goods produced in Israeli settlements illegally located in the occupied Palestinian territory.[1] Despite overwhelming international opposition to the settlements, virtually no action has been taken to prevent their development.  At the EU level, the European Commission (EC) has issued several Notices to Importers[2] and an Interpretative Notice[3] stating that the Israeli settlements are illegal under international law. The EC’s Interpretative Notice also stated that goods produced in those settlements are not covered by the EU-Israel Association Agreement of 2000. Despite these declarations, illegal settlement goods continue to reach the EU market. Especially troubling is Israel’s export of goods produced in settlements to the EU market, despite these products being outside the scope of the EU-Israel Association Agreement. The Control of Economic Activity (Occupied Territories) Bill 2018 ensures the enforcement of existing EU policy by the least restrictive method necessary to stop settlements from illegally profiting in the EU market.

The passing of the Control of Economic Activity (Occupied Territories) Bill 2018 through Ireland’s Seanad, represents a critical first step in differentiating between unlawful settlement products and products originating from Israel. It further gives effect to UN Security Council Resolution 2334 of 2016 and makes Ireland the first State internationally to formally enforce the differentiation requirement. Al-Haq urges European States to follow Ireland’s example. Critically EU Member States have the power to enforce a unilateral ban on settlement goods under the public policy exception of Article 27 of the EU-Israel Association Agreement.[4]  In this vein, recognizing an internationally illegal situation as legal is against public policy, thus a restriction on imports resulting from an illegal situation is permitted. States’ unilateral power to enforce such a restriction derives from the Treaty of Lisbon Articles 3 and 215, granting Member States the power to enforce the EU’s common policies.[5] The European Court of Justice has reaffirmed Member States’ duty to abide by and enforce international law in their institutional dealings, including under the Charter of the United Nations,[6] particularly when those dealings involve occupying third States.[7] Furthermore, the International Court of Justice calls on all States to neither recognize nor take any action that may support or further an illegal situation.[8] Accordingly, Al-Haq calls on all States to differentiate between and immediately ban unlawful settlement goods in line with their obligations as third States.