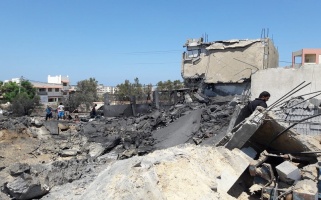 Amid continued escalations against the Gaza Strip, Israeli warplanes carried out intensive raids on various areas therein between the evening of 8 August 2018 and 11:00 pm 9 August 2018. According to Al-Haq’s field research, the Israeli occupying forces carried out 50 raids, during which about 120 rockets were fired across the Gaza Strip, targeting civilian locations, security sites, sites belonging to Palestinian factions, and empty areas. In addition, artillery shells were fired by Israeli tanks targeting sites allegedly controlled by Hamas, as well as open land near the Gaza fence. Israel’s bombardments resulted in the killing of three Palestinians, including a pregnant woman and her 18-months-old child, and the injury of 36 others, including 12 children.

The Killing of Inas and Bayan Abu Khammash

At approximately 1:30 am on Thursday, 9 August 2018, Israeli forces struck a 160-square metre house rented by Muhammad Kamel Abu Khammash, 28, and his family. The house, located in Al-Ja’farawi area in Wadi Al-Salqa village, east of Deir Al-Balah, was targeted while the family was sleeping in the living room. The attack resulted in the killing of Muhammad’s pregnant wife, Inas Suleiman Abu Khammash, 23, and her unborn nine-months-old baby, in addition to the killing of Muhammad and Inas’s 18-months-old daughter, Bayan Muhammad Abu Khammash. As a result of the attack, Muhammad was critically injured, while their house was partially destroyed. At the same time, Israeli forces also targeted the Al-Taqwa and Al-Iman Mosque, located to the east of Muhammad’s house, causing partial damage to the mosque.

The Killing of Ali Yousef Al-Ghandour

At approximately 5:20 pm, on 8 August 2018, Israeli forces fired several artillery shells targeting one of the security points east of Al-Zaitoun neighbourhood, east of Gaza city. Israeli warplanes also carried out an intensive aerial bombardment at about 9:15 pm, targeting various locations of the Gaza Strip. At around 11:20 pm, an Israeli reconnaissance aircraft targeted and bombed a white Subaru vehicle in a street in the ​​Mashrou’ Amer area in Beit Lahia in the northern Gaza Strip, killing Ali Yousef Al-Ghandour, 34, a member of the Al-Qassam Brigades, and injuring another.

On Thursday, 9 August 2018, at approximately 5:45 pm, and for about 25 minutes, an Israeli drone fired six missiles at the Said Al-Mis’hal Center for Culture and Science located in Al-Rimal neighbourhood, south of Gaza city. The five-floor building was built on an area of ​​about 400 square meters. The building included the Said Al-Mis’hal cultural centre, a theatre, and housed some of the Egyptian community living in the Gaza Strip. The residents of the area then received calls from the Israeli forces to evacuate the area, in preparation for the destruction of the building. At about 6:20 pm, Israeli warplanes fired three missiles at the building, destroying it completely and injuring 20 civilians, with injuries described as minor, all of whom were transferred to Al-Shifa Hospital in Gaza city for treatment.

The Bombing of a Water Well and an Electricity Generator

On Wednesday, 8 August 2018, at approximately 9:30 pm, Israeli warplanes bombarded a water well, a wastewater reserve, and an old building belonging to Al-Mughraqa Municipality, which ran sanitation and sewage services. The water well, wastewater reserve, and the municipality building were completely destroyed. The attack caused significant damage to two municipality vehicles and a large electric generator that was used to operate the water well. Two nearby houses were also partially damaged, as well as the main building of the municipality, opposite to the targeted site. Four civilians were also injured, including a passer-by whose car was severely damaged.

In addition, at around 2:30 am, on Thursday, 9 August, Israeli warplanes launched two rockets targeting the Al-Qadisiyya site belonging to a Palestinian faction in the Al-Salatin neighbourhood in Beit Lahia in the northern Gaza Strip, injuring eight residents, including five children. As a result of the rocket attacks, one of the water wells belonging to the Beit Lahia municipality was destroyed.

Overall, Israel’s bombardments against the Gaza Strip on 8 and 9 August resulted in the killing of three Palestinians, including a pregnant woman and her 18-months-old daughter, and the destruction, in full or in part, of civilian property, including a cultural centre, a mosque, a municipality building, in addition to two water wells, a wastewater reserve, and an electricity generator. Such extensive destruction of civilian property counters Israel’s obligation, as occupying power, to distinguish at all times between civilian objects and military objectives and to take all necessary measures to protect the civilian population in the occupied Gaza Strip.

In addition, the Israeli air force was under an obligation to adhere to the principle of proportionality in attack, which prohibits any attack that may be expected to cause incidental loss of civilian life, injury to civilians or damage to civilian objects, and which would be excessive in relation to the concrete and direct military advantage anticipated. As such, Israel’s destruction of and damage to two water wells and an electricity generator, which are indispensible to the lives of protected Palestinians in the Gaza Strip, contravenes the principles of distinction and proportionality. Article 53 of the Fourth Geneva Convention prohibits the destruction of private and public property, except where the destruction is absolutely necessary for military operations, whilst taking into consideration the interests and welfare of the protected civilian population.

Notably, cultural property must be especially protected from attack under customary international humanitarian law, which requires Israel to take “special care ... in military operations to avoid damage to buildings dedicated to religion, art, science, education or charitable purposes and historic monuments unless they are military objectives.”[1] Al-Haq recalls that extensive destruction of property not justified by military necessity may amount to a grave breach of the Fourth Geneva Convention and a war crime, giving rise to individual criminal responsibility at the International Criminal Court.[2] Under international human rights law, Israel’s destruction of the Said Al-Mis’hal cultural centre further denies Palestinians their right to take part in cultural life,[3] and overall contributes to Israel’s denial of Palestinian self-determination, which includes a right to freely pursue one’s social and cultural development.[4]