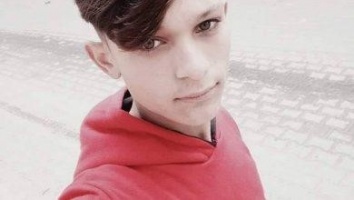 On 30 March 2019, during the One-Year Commemoration of the Great Return March (GRM), the Israeli Occupying Forces (IOF) shot and killed Adham Nidal Omara, 17, a resident of Al-Sha’af neighbourhood, east of Gaza city, with a 40 mm explosive green cylindrical grenade. The grenade hit Adham in the lower face, completely destroying and disfiguring his face and eventually killing him.

At the time of the shooting, at around 3:00 pm, Adham was approximately 150 metres away from the fence in the Malka area, east of Gaza city, where the GRM peaceful protests had been taking place. Behind the fence, a multitude of Israeli snipers were positioned, protected by sand dunes. The IOF directly targeted the peaceful protesters with live ammunition and tear gas canisters, often firing the latter in large numbers sporadically. In an affidavit to Al-Haq, an eyewitness states:

“At approximately 3:00 pm, while in the area [Malka] among the protesters, I heard the sound of a loud explosion which resembled that of a stun grenade fired by the soldiers. This was followed seconds later by a similar second explosion close to where I was standing. I saw a boy about 16-17 years old fall to the ground, approximately five metres away from where I was. I immediately filmed, with my phone, the scene of an injured boy who was lying on the ground. Beside him a journalist, in a blue bullet-proof press vest, was also on the ground, clutching his ears. The boy’s lower jaw and mouth were completely shattered with blood profusely flowing from the wound. I did not notice any traces of smoke emanating from the wound, so I thought at the time that the cause of his injury was an explosive bullet in the face.”[1]

Adham was immediately transported by ambulance to Al-Shifa Hospital, where, despite attempts to resuscitate him, he was pronounced dead at approximately 3:35 pm. Dr. Alaa Al-Astal, the Pathologist who performed the autopsy on Adham, stated that it was hard for him to determine the nature and source of the wound, due to the previously unseen nature and severity of the deep injury which completely disfigured the Adham’s jaw. In addition, according to Muhammad Saqr Omara, Adham’s uncle, who was present at the washing of the body before burial, documented that a solid light-green object had been found inside Adham’s mouth.[2] 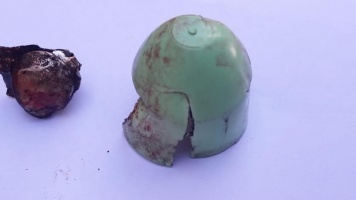 According to witness statements, this type of grenade has not been previously used by the IOF during the GRM. The light-green, cylindrical bullet is consistent with a 40 mm grenade cartridge, which may be launched from a direct-fire weapon.[3] It has not been possible to identify the exact type of grenade, however generally a green head will contain incapacitating gas or smoke, whereas gold is considered to contain high explosives. According to the eyewitness quoted above, no traces of smoke emanated from the wound.[4]

Al-Haq has previously documented the IOF’s use of unusual weapons during the GRM such as a new type of tear gas causing seizures and fainting.[5]

The ammunition, which completely disfigured Adham’s jaw causing his death, may be a type of explosive grenade. The use of anti-personnel projectiles is prohibited according to Rule 78 of the ICRC Study on international customary law, Brussels Declaration, Oxford Manual and UN Secretary-General’s Bulletin (1999).[6] This prohibition dates back to the St. Petersburg Declaration from 1868 which obliged contracting parties to renounce the employment “of any projectile [...] which is either explosive or charged with fulminating or inflammable substances.”[7] In addition, state practice has indicated that the use of explosive bullets which cause unnecessary suffering, amount to an illegal means of warfare, in breach of the principles of international humanitarian law.[8]

Means and methods of warfare which cause unnecessary suffering or superfluous injuries are commonly defined to include weapons which render death unavoidable and inflict suffering which has no military purpose,[9] such as that used to kill Adham. Rule 70 of the ICRC Study on international customary law prohibits the use of means and methods of warfare which cause superfluous injuries or unnecessary suffering.[10] The IOF’s deployment of such means may amount to war crimes under Article 8 (b)(xx) of the Rome Statute.[11] Such weapons are also prohibited in many treaties such as Article 23 of the Hague Regulations, Article 35 of the Additional Protocol I of the Geneva Conventions and in the preamble of the Ottawa Treaty.[12] Furthermore, numerous UN General Assembly resolutions recall this rule.[13] Notably, means and methods of warfare causing unnecessary suffering or superfluous injuries, are prohibited as a matter of customary international humanitarian law, and do not require a separate treaty prohibition.[14]

Excessive use of force, right to life and children’s rights

The IOF has persistently responded with unnecessary, disproportionate and excessive force and lethal force throughout the GRM. The excessive use of force is prohibited according to the Code of Conduct for Law Enforcement Officials and UN Basic Principles on the Use of Force and Firearms by Law Enforcement Officials which restrain the use of force to situations where it is “strictly necessary”, in “self-defence” and “in accordance with a principle of proportionality.”[15] The IOF’s killing of Adham with an explosive grenade was neither necessary, in self-defence nor proportional as he was peacefully protesting. Notably, Adham was about 150 meters from the fence when he was targeted by the grenade. The use of a grenade, in close proximity to civilian protestors and at close range, amounts to an unnecessary, disproportionate and indiscriminate use of force.

Adham, 17, is a child according to Article 1 of the Convention on the Rights of the Child (CRC).[16] By killing him, the IOF are in violation of Article 6 of the CRC which specifically protects children’s right to life.[17] The IOF are also in violation of Adham’s right to exercise his peaceful assembly and freedom of expression, as enshrined in Article 21 and 19 of the ICCPR.[18]

Adham’s killing further violates the right to life, affirmed in Article 6 of the International Covenant of Civil and Political Rights,[19] and constitutes a grave breach of Article 147 of the Fourth Geneva Convention and may amount to a war crime under Article 8 of the Rome Statute, giving rise to individual criminal liability at the International Criminal Court.[20]

[3] Al-Haq and Expert analysis on file.

[5] Al-Haq, “4 May 2018: IOF Continue to Deliberately Injure Palestinians, Expose Peaceful Protestors, Paramedis and Journalists to Tear Gas Causing Faintings and Seizures”, 6 May 2018, www.alhaq.org/advocacy/topics/gaza/1227-4-may-2018-iof-continue-to-deliberately-injure-palestinians-expose-peaceful-protesters-paramedics-and-journalists-to-tear-gas-causing-fainting-and-seizures; This would not be the first occasion as the IOF for example tested newly developed weapons on the Palestinian civilian population in Operation Cast Lead in 2008-2009 in Gaza, See: The Lab. Directed by Yotam Feldman. Gum films, 2013, http://www.gumfilms.com/projects/lab;

Al-Haq, “11 May 2018: IOF Commit Wilful Killings of Two Palestinians, including a Child, and Injure Hundreds as Gaza Protests Continue into Seventh Week”, 13 May 2018, www.alhaq.org/advocacy/topics/gaza/1235-11-may-2018-iof-commit-wilful-killings-of-two-palestinians-including-a-child-and-injure-hundreds-as-gaza-protests-continue-into-seventh-week

The definition was for example established in the ICJ’s advisory opinion on Nuclear Weapons (8 July 1996) as “harm greater than that unavoidable to achieve legitimate military objective”.

[18] Article 21 and 19, International Covenant on Civil and Political Rights.