Main Menu
Al-Haq Highlights Challenges of Environmental Protection in the OPT
Latest Topics
Al-Haq Successfully Concludes its First Online Summer School
Palestinian Authorities in the West Bank and Gaza Strip Must Uphold the Right to Freedom of Opinion and Expression
Special Focus: Sharp High Rate of Property Demolitions since the Second Half of 2020
Israel’s Ongoing and Systematic Smear Campaign against Al-Haq and its Staff Members
Al-Haq Participates in a Consultation Session for a Human Rights and Environmental Due Diligence Legislation in Ireland
Israel’s Refusal to Grant/Renew Visas to the UN OHCHR Highlights the Urgent Need to End Israel’s Impunity
Al-Haq Highlights Challenges of Environmental Protection in the OPT
05، Mar 2017 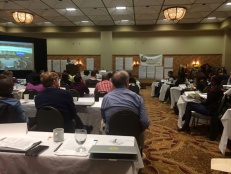 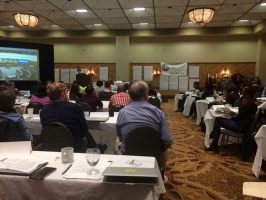 ELAW’s annual meeting brings together public interest environmental lawyers from around the world, including Africa, South America, North America, and Europe to discuss environmental justice issues affecting various communities. Al-Haq engaged in various working groups focused on human rights and the environment, indigenous peoples’ rights, climate law accountability and litigation, and access to information. During the working groups, Al-Haq highlighted issues concerning the environment in the Occupied Palestinian Territory (OPT), the exploitation of natural resources and the challenges in ensuring environmental protection as a result of the Israeli occupation.

Between 2-5 March 2017, Al-Haq also participated in the Public Interest Environmental Law Conference (PIELC). On 4 March 2017, Al-Haq presented in a panel on the “Challenges in Protecting and Accessing Freshwater Resources Around the World,” and discussed the exploitation of Palestinian water resources in the OPT. Al-Haq focused on the water situation in the Gaza Strip and the Jordan Valley and highlighted the role of the Israeli occupation, including the Israeli national water company (Mekorot), in limiting Palestinian access to water resources and the environmental deterioration of such water resources.

By participating in a variety of international forums, Al-Haq hopes to spread awareness on the broad impacts on Palestinians of the nearly 50-year Israeli occupation.