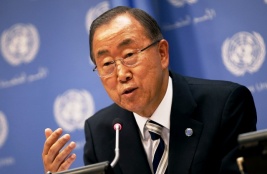 Re: Urgent action required in light of recent escalation of violence in the OPT

It is with grave concern that the Palestinian Human Rights Organizations Council (PHROC), respectfully submits this letter as an appeal to your Excellency to take immediate action towards the protection of Palestinians. In particular, we ask that you solicit support for the establishment of a UN Security Council group of experts to identify suitable means of protection for Palestinians in the Occupied Palestinian Territory (OPT). The group of experts should be asked to address the continued denial of the Palestinian right to self-determination, and the inability of Palestinians to practice sovereignty over land and natural resources, as an underlying and primary cause for continued violations of human rights under international law.

As the situation continues to deteriorate in the OPT, Israel has not demonstrated any intention to shoulder its responsibilities under international law towards the occupied Palestinian population. To the contrary, Israel is using security as a pretext to further infringement of the rights of the occupied population, making the need for an intervention by the UN Security Council all the more acute. The past couple of weeks have seen an alarming escalation of violence, in both frequency and severity, against Palestinians in the OPT. Since 1 October 2015, the Israeli occupying forces have killed 46 Palestinians.[1] There has also been an increase in settler violence with more than 48 cases since the beginning of October. Many of the killings may amount to the grave breach and war crime of wilful killing with Israeli forces unnecessarily resorting to lethal force. Simultaneously, Israel has stepped up its practices of collective punishment, including punitive house demolitions, restrictions on movement, and revocation of residency permits for East Jerusalem residents.

As you rightly alluded to in your video published two days ago, the current situation is a stark reminder that Israel’s occupation and colonialist enterprise is unsustainable, as it will continue to breathe violence until justice is served. Indeed, the current situation is a direct result of Israel’s unlawful colonial practices, including its continued attempts to forcibly displace the Palestinian people from the OPT and unlawfully transfer Israeli settlers therein, while continuing to implement a policy of separation between the Gaza Strip and the West Bank.

In East Jerusalem, Israel’s provocative measures are indicative of its intention to alter the city’s demographic composition. Most recently, the Israeli security cabinet agreed to impose closures on Palestinian neighbourhoods of East Jerusalem and placed several additional roadblocks around them, severely infringing on Palestinian right to freedom of movement. The consequences of these restrictions proved detrimental in the case of 65-year-old Huda Muhammad Darwish from Al-‘Essawiya, who died on her way to hospital after being detained at an Israeli roadblock set up to close off her neighbourhood. Prior to these measures, Israel prohibited Palestinians from entering the Old City whilst allowing Israelis to roam the area freely. Israeli forces also routinely accompany settlers into the Al-Aqsa compound. PHROC highlights that the Israeli Chief Rabbinate has clarified that entering the Al-Aqsa Mosque Compound is forbidden according to Jewish law.

In light of the deteriorating situation on the ground, we urge your Excellency once again to call for the establishment a UN Security Council group of experts, with the power to develop means for the protection of the Palestinian people, including the establishment of a list of sanctions for those responsible for inciting hatred, the escalation of violence, and for the commission of international crimes.

We remain your disposal, should you require any further information.