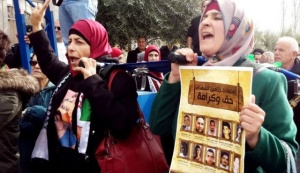 The Palestinian Human Rights Organisations Council (PHROC) supports the decision taken by the family of 15-year-old Hassan Khaled Manasrah, from occupied Jerusalem, to not receive his body which was in a humiliating and degrading state. PHROC also denounces Israel's continued policy of withholding 14 Palestinian bodies and setting degrading conditions and terms for their burial.

Hassan was killed by the Israeli Occupying Forces (IOF) on 12 October 2015 while with his cousin, Ahmad Manasrah, in the "Pisgat Ze'ev" settlement in Beit Hanina, North Jerusalem. Since then, Israel withheld Hassan's body and detained Ahmad. Deplorable footage has been released showing Ahmad in hospital and another of him subject to harsh interrogation.

The Israeli authorities placed various conditions on the families of HassanManasrah and 21-year-old Omar Yasser Iskafi, also from Jerusalem, in order to release their bodies. The terms were as follows: the bodies would be released on 22 March 2016 as long as each family deposits 20,000 shekels to guarantee that no more than 30 people participate in each funeral and that they be buried immediately. That day at approximately 1:00 am, the Israeli authorities deployed its forces and set up barriers around Bab Al-Asbat (Lion's Gate) in order to deliver the bodies. Hassan's family were shocked to see their son completely frozen. They could not identify him, hold him, or have a proper final goodbye. Meanwhile the Iskafi family buried Omar that night.

It is important to note that 14 Palestinian bodies remain in Israeli custody, including three children and one woman. All of them were individuals were from Jerusalem. The longest, Tha'er Abu Ghazaleh, has been  held since 8 October 2015. Countless bodies remain in the 'cemeteries of numbers';,while some have been there for decades, another 19 bodies were placed there following the 2014 attacks on the Gaza Strip.

The practice of withholding the bodies of the deceased amounts to collective punishment against Palestinians. It also obstructs autopsies from being carried out, potentially concealing evidence of extrajudicial killing.

In light of this, PHROC calls on:

2.Palestinian officials to organise a local committee of physicians, including international experts, to observe the autopsy process of all bodies and investigate the real reasons behind the death.

3.The International Red Cross to issue a statement prohibiting the practice of withholding bodies as it contravenes international humanitarian