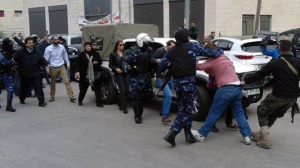 The Palestinian Human Rights Organizations Council followed up on the Palestinian Security Forces’ forceful assault on the peaceful assembly that took place on Sunday, March 12, 2017 in front of the Palestinian Court Complex in Al-Balou’ area in Al-Bireh City. The assembly was organized in protest of the court hearings against Bassel Mahmoud Ibrahim Al-A’raj, who was killed by the Israeli Occupying Forces on March 3, 2017, and against five other Palestinians on weapon possession charges, of whom four are currently detained by the Israeli Occupying Forces.

According to information documented by PHROC, protesters took part in the peaceful assembly and gathered on the sidewalk in front of the Palestinian Court Complex. Carrying Al-Araj’s photos, protesters shouted out slogans in opposition to the court hearing, and in condemnation of security coordination with the Israeli Occupying Forces. By 12:00 pm, tens of protesters had joined the peaceful assembly, some of whom blocked traffic as they stood in the middle of the street.

Around 12:15 PM, a large number of Special Police Forces, Riot police, and National Security Forces arrived to the scene fully equipped with shields and batons. They called on some of the protesters to stand aside, threatening that they would otherwise break up the demonstration by force. Immediately thereafter, the riot police began to violently attack the peaceful assembly by initiating forceful physical contact with the protesters, pushing them back using plastic shields, and beating them with batons. Riot forces also fired sound bombs, tear gas and pepper spray in an attempt to disperse the demonstration.

At least 16 people were assaulted, including Al-Araj’s father, Sheikh Khader Adnan, journalist Hafez Abu sabra, journalist Ahmad Melhem, and lawyer Fareed Atrash. The riot police also broke the camera of journalist Jihad Barakat and interrupted the live broadcast of Palestine Today TV Channel. Four of those injured were transferred to the nearby hospitals.

Six people were arrested including Sheikh Khader Adnan, Hadi Al Tarsheh and Suheil Idrisi and  were transferred to the Criminal Investigation Unit (CIU) in Al-Balou’ area. Detainees were held at the CIU for about an hour where their personal information was collected before they were released.

The recent assault follows a line of other violations of the right to peaceful assembly including the assault that took place on 25 February 2017, during which Palestinian Security Forces forcefully dispersed a peaceful assembly in Hebron, attacked and beat demonstrators using batons, tear gas, and live ammunition to disperse the crowd, and arrested a number of participants.

These assaults on the right to peaceful assembly occur within the context of a serious deterioration in the enjoyment of public rights and freedoms at the domestic level. Indicators include an increase in complaints of torture and ill-treatment in detention centres operated by Palestinian Security Forces, especially on the part of the Joint Security Committee in the detention center in Jericho, and on the part of Palestinian Security Forces acting as judicial police. This is in addition to the continued arbitrary arrests and violations of fair trial guarantees. Furthermore, there remains a lack of enforcement by Palestinian Security Forces of judicial decisions providing redress for those unlawfully detained. There have also been interferences by the Executive Authority and by the Palestinian Security Forces in the activities of nonprofit and non-governmental organizations. Further cases documented by PHROC reveal a noticeable increase in violations in 2017 and clearly point towards a continuing deterioration in the human rights situation on the ground. At the same time, accountability remains absent despite these cases being reviewed by the relevant authorities and despite the submission of criminal communications to the Public Prosecutor. As such, indicators reveal a systematic pattern of violations compounded by the absence of accountability for perpetrators and redress for victims.

Accordingly, PHROC warns that the continuity of the dangerous deterioration in the respect for various rights and freedoms and the absence of justice and redress is contributing to the culture of mistrust in the rule of law, accountability, and in the role of the justice system in the protection of human rights. As a result, PHROC recommends the following: