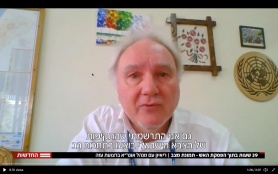 The Palestinian Human Rights Organisations' Council (PHROC) and the Palestinian Network of Non-Governmental Organisations (PNGO) condemn the recent media statements made by Mr. Matthias Schmale, Gaza Director of the United Nations Reliefs and Works Agency for Palestinian Refugees in the Near East (UNRWA), regarding the latest Israeli aggression on the Gaza Strip.

In an interview with Channel 12, an Israeli channel, on 23 May 2021, Mr. Schmale stated that he “would not dispute” the precision of the IDF’s bombardments of the Gaza Strip and that he believes that there was “huge sophistication in the way the Israeli military struck over the last 11 days.”  He added that the Israeli military “did not hit, with some exceptions, civilian targets”, and that his concern was that the strikes were more vicious in terms of their impact.[1]

In providing this kind of testimony, Mr. Schmale completely ignored the crimes committed during the latest Israeli offensive against Palestinian civilians in the Gaza Strip, including Palestinian refugees, who make up around 70% of the population.

In al-Shati refugee camp, which receives services from UNRWA, 9 civilians, including 7 children and 2 women were killed after Israeli warplanes launched six missiles at a three-storey house without a warning. The house belonged to Alaa Abu Hatab, who survived the attack along with his 5-month-old baby, but the rest of their family was killed. Another incident that Mr. Schmale should be reminded of  is the massacre that took place on Al-Wehda Street on 16 May 2021, when Israeli warplanes targeted a residential building killing 43 innocent civilians, some of them constitute entire families. Both incidents are enough evidence to demonstrate Israel’s disregard for the lives of innocent Palestinian and its lack of precision and sophistication when conducting its military operations.

According to our observations, which corresponds with the observations of Palestinian, Israeli and international human rights organisations, Israel has systematically targeted civilians and civilian areas and buildings as well as infrastructure in complete disregard to core principles of international humanitarian law, mainly distinction and proportionality. The aim behind such attacks was not achieving military gains or defeat Palestinian resistance groups only, but rather to collectively punish and terrorise the civilian population in the Gaza Strip, as it has done so over the last 14 years through the imposition of an illegal and humanitarian blockade, and the launch of three destructive and deadly wars.

During the eleven days of aggression, the IOF have killed more than 240 Palestinians in the Gaza Strip, the majority of whom are civilians and wounded more than 1,400 others. Among those killed, were 64 children and 39 women.

It is regrettable that Mr. Schmale, who heads one of the most important international organisations responsible for protecting and advocating the rights of Palestinian refugees in Gaza, to provide statements indirectly praising the precision and sophistication of the Israeli army, when Israel is in fact constantly committing war crimes and crimes against humanity against the Palestinian people.  Instead of calling to address the root causes behind the conflict, Mr. Schmale appeared to defend the actions of the Israeli military.

PHROC and PNGO views the statements made by Mr. Schmale as misleading and dangerous, and provides cover and legitimacy to serious violations committed by the Israeli occupation forces. PHROC and PNGO demand UNRWA to provide an immediate explanation of its position from Mr. Schmale’s statements and to publicly apologize to the Palestinians victims of the Israeli offensive.