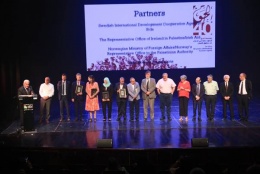 Al-Haq learned with great sadness of the death of human rights defender and lawyer Michel Tubiana, who passed on 2 October 2021 due to implications of Covid-19. With the death of Michel, the global human rights movement lost one of its most principled and passionate advocates for human rights, who was a true friend to Palestine and the Palestinian people.

Michel Tubiana is the former president of the French Human Rights League (LDH), a founder and a former president of Euromed Rights and a former vice president of FIDH for 10 years. Shortly, before his death and despite of his health conditions Michel was heavily involved in the preparations to celebrate the FIDH Centennial Congress.
Michel constantly strove to achieve positive human rights change for the most vulnerable. In addition to being an inspirational soul and well-respected professional across the world, he was fiercely justice focused and committed to defending human rights.

In 2003, Michel led one of the first fact-finding missions to Palestine and met with Al-Haq among dozens of other civil society actors. In 2015, following Israel’s military operation on Gaza and in his capacity as the president of the Euro-Mediterranean Human Rights Network (EMHRN), Michel headed a mission to the occupied Palestinian territory to express solidarity with fellow EMHRN members and other civil society organisations but was denied entry by the Israeli occupying authorities.

Michel’s courage and invaluable contributions to the international human rights movement were central in promoting rights and justice for the Palestinian people. We are deeply grateful to him and his work. Shawan Jabarin, General Director of Al-Haq said: “I am deeply saddened with the death of our close friend Michel Tubiana. We used to meet in Paris and had a strong personal relationship in addition to a professional one. He was a friend in life and a comrade in the pursuit of justice. In 2019, he attended Al-Haq 40th anniversary in Ramallah and delivered a remarkable intervention. Thank you, Michel, for all your unwavering support. We will miss you”

We send our deepest condolences to his family and beloved friends all over the world. Michel’s memory will stay alive in our work and his impact will continue to be cherished by all those who knew him.