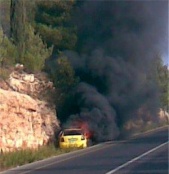 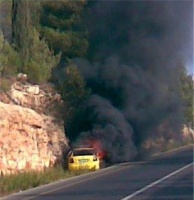 Last week, an Israeli settler threw a Molotov cocktail into a Palestinian taxi, severely injuring the Ghayatha family that was travelling near Gush Etzion, a cluster of Israeli settlements located south-west of Bethlehem. Al-Haq field researchers briefly interviewed the victims of the attack, who are still hospitalised, some of whom in critical condition, in Jerusalem.

When the taxi was close to Bat Ayin settlement, the driver, Basem Ghayatha (49 years old), saw an Israeli settler dressed in Orthodox religious clothing walking through the bushes. When the settler was about two metres from the taxi, he threw a molotov cocktail into the vehicle which was set alight. The device entered the car through the side window by Ayman’s front seat and exploded in his lap. At that point, Bassam lost control of the car which crashed against a safety barrier on the side of the road. The passengers remained trapped for several minutes inside the car that was engulfed in flames.

Jamila, who was struggling to leave the car because her plastic shoes has melted to the floor, was the first person to escape and was followed by her daughter Iman. Afterwards, Basem and the remaining passengers also managed to leave the burning taxi. The driver of a passing car called an ambulance, which arrived soon afterwards and took all the members of the Ghayatha family to the Haddasa ‘Ein Karim Hospital in Jerusalem.

All those involved in the incident sustained severe burns. Ayman’s condition is the most critical and he remains in the intensive care unit of Hadassa Hospital. Hasan’s condition is also worrying and he is hospitalised in the burns department. The 6-year-old child, Muhammad, sustained burns on 35 per cent of his hands and back. Basem sustained second degree burns on his face and third degree burns on his hands. Only Iman was discharged the day after the assault. The rest of her family is still receiving medical treatment.

Al-Haq condemns the heinous attack against the Ghayatha family and is extremely concerned about the escalation of violence by Israeli settlers against the protected Palestinian population. At present, Israeli settlers, and indeed the Israeli military, enjoy a culture of impunity when it comes to incidents of violence against Palestinians. As such, there can be no surprise at the fact that the number of incidents of settler violence increased by 144 per cent between 2009 and 2011. This figure is set to increase again in 2012 as Israel again fails to hold perpetrators of settler violence to account.

In addition, on 2 August, Al-Haq documented an incident in which three containers of petrol were found close to the wheels of a Palestinian car in the village of Sinjil, Ramallah governorate. A recently extinguished cigarette was found on top of each container but the devices did not explode.

The consistent failure of the Israeli authorities to act with due diligence has encouraged an increase in settler attacks against Palestinians. Al-Haq reasserts the primary responsibility of Israel to protect the occupied Palestinian population and therefore conduct thorough investigations, bring those responsible to justice and punish them if found guilty.