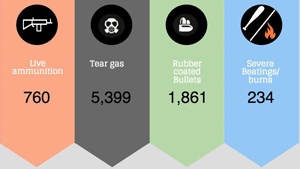 Palestinian frustration over Israel’s occupation has reached a boiling point. Israel continues to dismiss its obligations as the Occupying Power and instead is escalating state and state-sanctioned violence against Palestinians.

This has resulted in an increase in the number of Palestinians killed, injured, arrested and subjected to collective punishment by the Israeli Occupying Forces and Israeli settlers in October 2015.

Al-Haq has produced the following infographics to illuminate the severe conditions Palestinians continue to face: