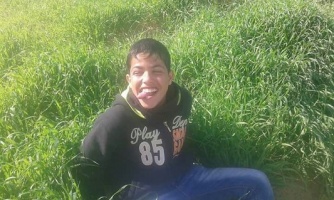 Around 8:00 pm on Saturday evening, the four juveniles headed towards the eastern fence on foot from their homes in Rafah’s south-eastern Al-Salam neighbourhood. Covering a distance of about four kilometres, the journey took them close to an hour. When the four juveniles reached the area near the border, they were unable to see the IOF in the darkness. The youths continued to move closer until they arrived some 30 to 50 metres from the eastern fence. Salim and Ahmad were walking ahead of their two friends Salem and Abdullah when they heard sounds of movement nearby, followed by heavy shooting and explosions. Salim gave the following testimony to Al-Haq:

I ran away quickly and my friend Ahmad Abu Harb fled with me. I did not see my friends Abdullah Ermilat and Salem Sabbah because of the darkness and did not know their fate. We ran towards the west as the heavy shooting continued and the sound of explosions were heard near us. I did not feel that I had been injured but I was very afraid because of the shooting and the sound of successive explosions in the area. I fell to the ground out of the intensity of my fear and then got up again and continued to run with my friend Ahmad for about 400 metres, until we reached the point where field control personnel belonging to the Palestinian National Security Forces were assigned to guard the border. Then I felt pain in my legs and right hand and saw blood flowing from them. I realized that I had been injured. I also saw my friend Ahmad bleeding from his legs. The field control personnel transported us from the area in a car belonging to them. The car drove us 500 meters away to the Gaza International Airport road, where a Palestinian Red Crescent Society (PRCS) ambulance arrived and took us to Abu Yousef Al-Najjar Hospital, in Al-Jounaina neighbourhood, east of Rafah. While we were being transported, we informed the paramedics that two of our friends were near the border and that we did not know their fate. When we arrived at the hospital, I was entered into the emergency department and underwent medical examinations. I was found to have shrapnel in both legs and the right hand. My friend Ahmad also underwent tests and was found to have been injured by shrapnel in the abdomen and the legs, while he also suffered a fracture in the right thigh. First aid was provided to us, and about an hour later we were transferred to the Gaza European Hospital in Khan Younis for further tests and treatment. [...] I found out from my father at around 9:00 am the following day that my two friends, Salem Sabbah and Abdullah Ermilat, had been killed as a result of injuries sustained to the abdomen and various parts of their bodies. I was told that they were left bleeding to death near the border, that no ambulance was able to reach them all night, and that they were only found the following morning, on Sunday, 18 February 2018, and taken to Abu Yusuf Al-Najjar Hospital in Rafah.

Excerpt of Al-Haq Affidavit No. 30A/2018, given by Salim Mahmoud Abu Safra, a resident of Al-Salam neighbourhood in Rafah on 18 February 2018

The PRCS ambulance waited at a distance of about 300 metres from the eastern fence, the distance allowed to it by the IOF, but out of safety risks and concern for further life-threatening shooting, no paramedics or individuals were able to reach the area where Salem and Abdullah were left to die of their injuries. According to Salim, whose father has been unemployed for years as a result of Israel’s suffocating closure over the Gaza Strip, the youths wanted to cross the eastern fence to work inside Israel and provide a living for their families. Salim told Al-Haq that the dire financial conditions his family has been facing were a main motivator for him, in addition to the fact that he had heard of other youths who had successfully crossed into Israel in the past.

The prohibition of violence to the lives of civilians, including children, in particular murder, is a norm of customary international law applicable to international and non international armed conflicts, and a fundamental principle, which Israel’s occupation is violating.[1] In 2006, the United Nations (UN) Security Council adopted resolution 1674, reaffirming its commitment to protect people from genocide, war crimes, ethnic cleansing and crimes against humanity.[2] The resolution “[r]ecalls that deliberately targeting civilians and other protected persons as such in situations of armed conflict is a flagrant violation of international humanitarian law, reiterates its condemnation in the strongest terms of such practices, and demands that all parties immediately put an end to such practices”.[3] Notably, the current situation in the Gaza Strip represents a law enforcement paradigm, as it currently does not reach the threshold of active hostilities for the purposes of applying the laws of armed conflict. Even so, Israel’s targeting and shelling of unarmed Palestinian civilians, is a breach of the principle of distinction and it is prohibited to employ weapons of a nature to cause superfluous injury or unnecessary suffering.[4]

Under international human rights law, the killings of the two boys, Salim Sabbah, 17, and Abdullah Ermilat, 15, violates Article 6(1) of the International Covenant on Civil and Political Rights (ICCPR), which provides that “no one shall be arbitrarily deprived of their life”.[5] The Convention on the Rights of the Child (CRC) requires Israel to “take all feasible measures to ensure protection and care of children who are affected by an armed conflict”[6] in line with its obligations, as Occupying Power, under international humanitarian law applicable in the OPT.[7] Accordingly, the actions of the IOF who lie in wait at the fence to shoot at persons to kill, instead of arresting persons who may be an alleged security risk, are in clear and stated violation of Article 6(1) of the ICCPR.[8] It is also clear that there was no warning or attempt made to precaution the boys of the attack, in violation of Israel’s obligation under the Basic Principles on the Use of Force and Firearms by Law Enforcement Officials.[9]

As in numerous cases documented by Al-Haq, including over the past week,[10] Israel is in breach of its obligation not to resort to excessive and lethal force against protected Palestinian civilians in the Occupied Palestinian Territory (OPT). The Basic Principles require that “intentional lethal use of firearms may only be made when strictly unavoidable in order to protect life.”[11] They also require the IOF to ensure timely assistance and medical aid for injured persons, at the earliest possible moment.[12] Clearly, there is no necessity or consideration of proportionality established in shooting to kill unarmed civilian boys, notably Salem and Abdullah who were left bleeding to death without the provision of medical assistance for their injuries, which may further amount to prohibited ill-treatment in violation of Israel’s obligations under Article 7 of the ICCPR.[13] The killings of Salem and Abdullah may further amount inter alia to wilful killings and ”[i]ntentionally directing attacks […] against individual civilians not taking direct part in hostilities”, which are prohibited as graves breaches of the Fourth Geneva Convention[14] and war crimes, in particular when “committed as part of a plan or policy or as part of a large-scale commission of such crimes”.[15] As such, the killings may fall within the purview of the preliminary examination by the International Criminal Court (ICC) into the situation in Palestine since 13 June 2014.

Al-Haq condemns the continued eleven-year closure of the Gaza Strip and the ruthless shoot-to-kill policy,[16] that Israel enforces to keep Palestinian civilians trapped in the Gaza Strip, in violation of their right to life and their right to freedom of movement.[17] Al-Haq strongly condemns the conduct of the IOF towards the four unarmed Palestinian boys, Salim Abu Safra, Ahmad Abu Harb, Salem Sabbah, and Abdullah Ermilat, and calls on Israel to carry out independent, impartial, prompt, thorough, effective, credible, and transparent investigations into the killings of Salem Sabbah and Abdullah Ermilat.[18] In light of Israel’s impunity for violations of international law in the OPT, Al-Haq calls on the ICC to open an investigation into the situation in Palestine and to examine all cases in which international crimes are alleged to have been committed in the OPT and reminds States of their obligations to trigger Article 146 of the Fourth Geneva Convention to hold Israeli perpetrators of grave breaches accountable.

[4] Protocol additional to the Geneva Conventions of 12 August 1949, and relating to the protection of victims of international armed conflicts (adopted on 8 June 1977, entered into force 7 December 1978) 1125 UNTS 3 (Additional Protocol I), Article 35. ICRC, Customary International Humanitarian Law Database, Rule 7. The Principle of Distinction between Civilian Objects and Military Objectives, available at: https://ihl-databases.icrc.org/customary-ihl/eng/docs/v1_rul_rule7. ICRC, Customary International Humanitarian Law Database, Rule 70. Weapons of a Nature to Cause Superfluous Injury or Unnecessary Suffering, available at: https://ihl-databases.icrc.org/customary-ihl/eng/docs/v1_rul_rule70.

[9] Basic Principles on the Use of Force and Firearms by Law Enforcement Officials, adopted by the Eighth UN Congress on the Prevention of Crime and the Treatment of Offenders, Havana, Cuba, 27 August to 07 September 1990 (hereinafter ‘Basic Principles’), Principle 10.

[16] See, e.g., Al-Haq, “The Killing of Mahmoud Badran: The IOF's Excessive Use of Force and Shoot to Kill Policy” (23 June 2016), available at: http://www.alhaq.org/advocacy/topics/right-to-life-and-body-integrity/1055-the-killing-of-mahmoud-badran-the-iofs-excessive-use-of-force-and-shoot-to-kill-policy.

[18] UN Human Rights Committee, General comment No. 36 on article 6 of the International Covenant on Civil and Political Rights, on the right to life, Revised draft prepared by the Rapporteur, Advance Unedited Version, paragraph 32.