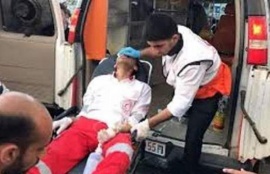 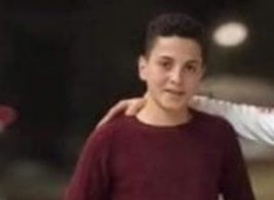 Between 29 May and 9 June 2019, Al-Haq monitored and documented the killing of three Palestinians across the Occupied Palestinian Territory (OPT). The killing of Abdallah Lua’y Ghaith, Yousef Wajih,[1] and Muhammad Subhi Al-Judeili represent Israel’s unnecessary and disproportionate use of force against the occupied Palestinian population, depriving them inter alia of the right to life and bodily integrity.

On Friday, 31 May 2019, Israeli occupying forces (IOF) situated by the Annexation Wall east of Bethlehem, in the Wadi al-Homs area, fired two live bullets at 15-year-old Abdallah Lua’y Ghaith, killing him. That morning, Abdallah, accompanied by his father, Lua’y, his cousins, Abdelrahman, 18 and Sirin, 14, and Abdallah’s three sisters, Shaima, 16, Tartil, 14, and Dania, 12, left the house at 7:30 am and headed towards Wadi al-Homs. Abdallah and Abdelrahman planned to cross the Annexation Wall, a double barbed wire fence, to go to Jerusalem to attend the last Ramadan Friday prayers at Al-Aqsa Mosque, whereas the rest of the family (who had received permits from the Israeli authorities) would pass through the checkpoint.

The family arrived at Wadi al-Homs at about 8:00 am. Abdallah and Abdelrahman passed through the first fence, which had already been lowered. As Abdallah was trying to cross the second fence, about five metres away from the first fence, he was shot with two live bullets by the IOF. Abdallah escaped and ran for approximately 15 metres towards his father, who was situated about 80 metres away from the fence. Abdallah’s father, Lua’y, approached his son and carried him to the car and transported him to the Beit Jala Governmental Hospital, where they arrived before 9:00 am. Abdallah had been shot in the right and left sides of his chest, with one bullet hitting his heart.[3] The medical team tried to resuscitate Abdallah but pronounced him dead about half an hour later, as a result of injuries sustained from the bullets.

The Killing of a Palestinian Paramedic Muhammad Subhi Al-Judeili, 36 during the Great Return March in Gaza 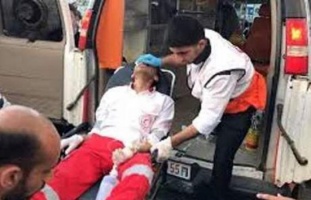 On Monday, 10 June 2019, Muhammad Subhi Al-Judeili, 36, was pronounced dead at Al-Ahli Hospital in Hebron. Muhammad had been shot in the nose with a rubber-coated metal bullet by the IOF on Friday, 3 May 2019 at approximately 6:10 pm, while on duty as a paramedic for the Palestinian Red Crescent Society during the Great Return March protests. Muhammad was wearing an official vest identifying him as a paramedic when he was shot, while located approximately 200 meters from the fence near Abu Safiya return camp, east of Jabaliya in the northern Gaza Strip. Muhammad sustained serious injuries and was transferred to Al-Shifa Hospital in Gaza. His skull and nose were fractured, and he remained in Al-Shifa for one day and was then transferred to Al-Quds Hospital in Gaza. There he remained in a critical condition for about a month, suffering from dizziness and pain in his nose and head.

On 2 June 2019, Muhammad was released for one day to spend the day with his family, before he was set to be transferred outside of Gaza to receive medical treatment. On that day, his condition deteriorated, as he suffered seizures and was subsequently transferred to Shuhada Al-Aqsa Hospital in Deir Al-Balah. Muhammad went into a coma which required his transfer to Al-Ahil Hospital in Hebron, where it was established that he was brain dead, as a result of the injury sustained on 3 May 2019.[4] It should be noted that this is the fourth Palestinian paramedic to be killed since the beginning of the Great Return March that commenced on 30 March 2018.[5]

As Occupying Power, Israel has obligations towards the protected Palestinian population under international human rights and humanitarian law. The IOF’s policing activities and duties are governed by international human rights law and the provisions of the UN Basic Principles on the Use of Force and Firearms by Law Enforcement Officials, which provides that “[l]aw enforcement officials shall not use firearms against persons except in self-defence or defence of others against the imminent threat of death or serious injury...and only when less extreme means are insufficient to achieve these objectives.”[6] In addition, the UN Code of Conduct for Law Enforcement Officials provides for strict limitations on the use of force.[7]

The killings of Abdallah, Yousef, and Muhammad by the IOF demonstrate Israel’s disregard for Palestinians’ right to life, in violation of Article 6 of the International Covenant on Civil and Political Rights (ICCPR)[8] which provides that everyone has the right to life and “no one shall be arbitrarily deprived of his life”. The killings of Abdallah Lua’y Ghaith and Muhammad Subhi Al-Judeili, carried out in the absence of any imminent threat of death to the IOF, violate Article 6 of the ICCPR, and may amount to wilful killing, further constitutes a grave breach of Article 147 of the Fourth Geneva Convention[9] and a war crime under Article 8 of the Rome Statute of the International Criminal Court (Rome Statute).[10]

Right to Freedom of Movement

The case of Abdallah highlights how Israel’s imposed restrictions on Palestinians, limit their access and movement within the OPT, denying them access to Jerusalem. Article 13 of the Universal Declaration of Human Rights (1948) provides for the rights of freedom of movement for all within their state and the freedom to leave their state and return to it.[11] Israel’s imposed restriction on movement also violates Article 12 of the ICCPR which adds that the right of movement “shall not be subject to any restrictions except those which are provided by law, are necessary to protect national security, public order….”[12] According to the UN Office for the Coordination of Humanitarian Affairs (OCHA), Israel had 705 permanent obstacles throughout the West Bank as of July 2018,[13] excluding Jerusalem, restricting Palestinian movement within the occupied West Bank.

Such restrictions imposed by the Israeli authorities and military on Palestinians’ movement have particular effects during religious holidays, during which Palestinians Muslims and Christians are denied access to visit religious and holy sites in Jerusalem. This year, throughout the holy month of Ramadan, Israel placed extensive limitations on Palestinians from the OPT wishing to visit the Al-Aqsa Mosque.[14]

Article 46 of the Hague Regulations mandates that “religious convictions and practices” be respected.[15] In the case of Abdallah, he was deprived of his freedom to practice his religion by worshipping and praying in the community with other members of his religion at Al-Aqsa Mosque, a place of great importance in Islam, in violation of Article 18 of the Universal Declaration of Human Rights.[16]Article 27 of the Fourth Geneva Convention protects “religious convictions and practices, and their manners and customs. They shall at all times be humanely treated, and shall be protected especially against all acts of violence….”[17] Article 18 of the ICCPR protects freedom of religion and the manifestation of “religion or belief in worship, observance, practice, and teaching.”[18]

Protection of Paramedics and Health Workers

The killing of Muhammad Subhi Al-Judeili, a paramedic, violates Article 17, section 3 of the Fourth Geneva Convention, which applies during times of armed conflict and occupation. The Convention states that medical personnel must be permitted passage to aid and evacuate ill or wounded individuals.[19] Article 20 of the Fourth Geneva Convention states that medical personnel are entitled to protection while they are acting in a medical capacity.[20] Rather than being granted protection, Muhammad was fatally shot by the IOF, in breach of international law. The deliberate targeting of civilians, including medical staff and paramedics,[21] as demonstrated over the past 61 weeks of the Great Return March protests in the Gaza Strip, constitutes serious violations of international humanitarian law and amounts to war crimes, giving rise to individual criminal responsibility under the Rome Statute.

Al-Haq condemns the targeting and killing of unarmed civilians by the IOF, as manifest violations of international humanitarian law and international human rights law and calls on Israel to immediately investigate the deaths and hold those responsible to account. In addition, Al-Haq calls on third party States to respect and ensure respect for the Geneva Conventions including by pursing accountability for grave breaches of the Fourth Geneva Convention.

[1] On 31 May 2019, Israeli forces shot and killed Yousef Wajih, 18, in Bab al-‘Amoud (Damascus Gate) in the Old City of Jerusalem. Israeli sources claim that Yousef had carried out an attack, injuring two Israeli settlers. Al-Haq continues to document the case.

[6] Principle 9, UN Basic Principles on the Use of Force and Firearms by Law Enforcement Officials, Havana, Cuba, 7 Sept. 1990.

[14] See Ahmad Al-Bazz, Photo Essay: This is what Israel’s ‘relaxation of movement restrictions’ for Ramadan looks like, Mondoweiss (3 June 2019), https://mondoweiss.net/2019/06/relaxation-movement-restrictions/; Tens of thousands attend second Friday of Ramadan in Jerusalem’s Al-Aqsa, WAFA (17 May 2019),