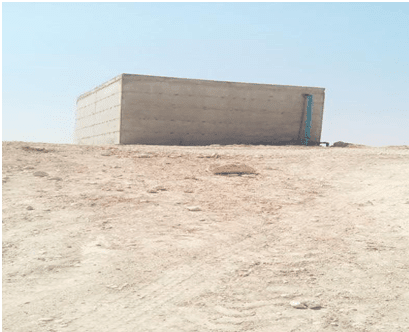 Between 8 and 21 July 2019, Al-Haq continued to document ongoing demolitions throughout the West Bank, including of a Palestinian-owned home under construction and a water collection pool. In addition, the Israeli occupying authorities issued stop-construction orders against Palestinian property, including for tents and a Palestinian-owned water reservoir in Kardala in the northern Jordan Valley. The destruction of private and public property by the Israeli occupying authorities violates numerous principles of international human rights and humanitarian law.

Specifically, on 8 July 2019 the Israeli occupying authorities demolished the foundation of a home under construction in Khirbet Al-Qat, in Beit Ummar, north of Hebron. The home was owned by Muhammad Khalil Sabarneh, 35, and had an area of 150 m2. The demolition was carried out by the Israeli Civil Administration personnel, accompanied by the Israeli occupying forces using a Hyundai digger. The Israeli Civil Administration had notified Mr. Sabarneh of the demolition order twice, in May and June 2019, using the justification of lacking a building permit.[1]

On the same day in the early morning hours, the Israeli Civil Administration, accompanied by Israeli forces, raided the village of Kardala in the northern Jordan Valley. The forces then moved into the agricultural area in the vicinity of ‘Ein Al-Beida village, and delivered stop-construction and stop-work orders against residential structures and a water tank. The owners were given deadlines of 5 August 2019 to demolish the structures.

The residential structures include several tents located near Palestinian farms in ‘Ein Al-Beida. The tents are owned by village residents and inhabited by farmers and their families, especially during the farming season. The tents have been established for more than five years. The cement water reservoir has a capacity of about 60 cubic meters and was constructed upon donation. Since its construction about a month ago, it has been used to supply the 400-person town of Kardala with drinking water from the Israeli company ‘Mekorot’.[2]

It should be noted that following the 1982 transfer of ownership of Palestinian water infrastructure in the West Bank from the Israeli military to the Israeli company, Mekorot, the village’s drinking water has been supplied by Mekorot, as in the rest of the West Bank.[3] However, Mekorot supplies only five cubic meters per hour for Kardala for agriculture, livestock, drinking and domestic use, which is insufficient and makes the water reservoir necessary.[4]

On 16 July 2019, the Israeli authorities demolished a water collection pool that was used to irrigate crops in 24 dunums of agricultural land, four cows and 200 sheep, using the justification that the construction was unauthorised. The water collection pool was located in Wadi al-Ghrous, approximately 300 metres away from Kiryat Arba settlement, east of Hebron. The demolition was carried out by the Israeli Civil Administration personnel, accompanied by Israeli forces using LiuGong and Hyundai machinery. The pool, owned by Zayed Nimr al-Ja’bari and his family, had a capacity of 650 cubic metersand was constructed in July 2018. Mr. al-Ja’bari had received two demolition notices from the Israeli Civil Administration, both less than a month before the date of the demolition. The pool supported the farm which is the sole source of income for Mr. Zayed and his family, including his married children and their families, consisting of 29 people.[5]

Israel’s ongoing demolitions and stop-construction orders for Palestinian-owned homes, structures and property throughout the West Bank, particularly in Area C and East Jerusalem, demonstrates Israel’s complete disregard for international law, its obligations as Occupying Power, and the rights and well-being of the occupied Palestinian population.

Given that the Israeli authorities barely grant Palestinians building permits, Palestinians have no choice but to build their structures without permits in East Jerusalem and Area C,[6] which are then subjected to demolition orders and demolitions. Israel’s demolition policy also creates a coercive environment for Palestinians, putting pressure on them to leave their areas of residence to be replaced with Israeli settlers.[7]

Under Article 49 of the Fourth Geneva Convention, Israel as the occupying power is prohibited from carrying out direct or indirect forcible transfers of protected persons within the occupied territory. Forcible transfer is also a war crime, and is specifically defined to include transfers “caused by fear of violence, duress, … or by taking advantage of a coercive environment”.[8] As a result, the repeated demolitions and threats of demolitions against Palestinian-owned structures, creating a situation where Palestinian families and communities essentially have no choice but to leave their land, constitutes forcible transfer in violation of international law.

Israel’s demolition policy is also contrary to Article 53 of the Fourth Geneva Convention, which prohibits an occupying power from destroying personal or private property unless it is for militarily necessity.[9] None of the properties mentioned above, demolished or threatened with demolition, fit this exception, further constituting a grave breach of Article 147 of the Fourth Geneva Convention.

Furthermore, Israel has long prohibited Palestinians from building their own water infrastructure and structures in the OPT without permits, which are almost impossible to obtain, restricting Palestinian access to and extraction of water resources. At the same time, Israel maintains discriminatory practices in the allocation of water resources, for the benefit of Israeli settlers.[10] By demolishing and threatening to demolish Palestinian water structures in the West Bank, Israel infringes upon the right to water as established in international law, including in Article 11(1) of the International Covenant on Economic, Social and Cultural Rights and General Comment No. 15 of the UN Committee on Economic, Social and Cultural Rights,[11] and recognised by UN General Assembly and Human Rights Council.[12] The right to water is also recognised in the Convention on the Elimination of all Forms of Discrimination against Women,[13] the Convention on the Rights of the Child,[14] and the Convention on the Rights of Persons with Disabilities.[15]

Israel, as an occupying power, is also prohibited under international humanitarian law from transferring its civilian population into the occupied territory.[16] Israel’s demolition policy also violates these obligations, since the removal of Palestinians from Area C and East Jerusalem aims at transferring Israeli citizens (settlers) into those areas.

[3] Water for One People Only, 35, Al-Haq, 2013, available at: http://www.alhaq.org//cached_uploads/download/alhaq_files/publications/Water-For-One-People-Only.pdf.

[7] Human Rights Council Report to the Secretary-General on Israeli settlements in the Occupied Palestinian Territory, including East Jerusalem, and in the Occupied Syrian Golan (13 April 2017), UN Doc A/HRC/34/39.