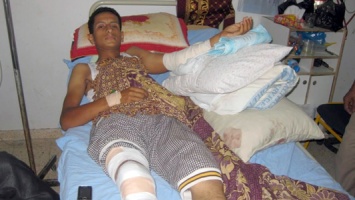 The buffer zone is a no-go area extending along the Gaza Strip’s border with Israel as well as at sea. This area has been enlarged over the years by the Israeli authorities without properly informing the occupied Palestinian population about its extension, and its current size and depth remain uncertain due to the fact that they are not physically demarcated. At present, it is estimated that the buffer zone restricts access to land up to 1,500 metres from the Israeli border. This area also extends over 17% of the territory of the Gaza Strip, including 35% of its total agricultural land, severely weakening the potential for economic and agricultural development in the Gaza Strip.

Muhammad lives in the al-Zannah area, Bani Suhayla, east of Khan Younes, approximately two kilometres from the border with Israel. On 11 August 2012, at 5.15 am, he went to the family-owned farm with his older brother Ahmad and two cousins to help gather tomatoes and zucchini. The farm extends over 30 dunums and is some 600 meters from the border.

When Muhammad and his relatives arrived at the land, they saw other farmers working in the neighbouring farm. At around 5.40 am, while Muhammad was collecting some empty buckets to gather the crops, he saw an Israeli military jeep moving on the other side of the border. A few moments later, Muhammad heard gunshots coming from beyond the border, specifically from the place where the jeep had stopped.

At that point, Muhammad realised he had been hit and he fell to the ground. He started shouting and his relatives, along with the farmers from the neighbouring property, brought Muhammad to a car and drove him to the school ‘Abasan al-Jadida, two kilometres from the scene of the incident. There, an ambulance of the Palestinian Ministry of Health arrived and took him to the European Gaza Hospital. At the hospital, Muhammad was informed that he had sustained injuries caused by two live bullets in his left elbow and right thigh. Muhammad was operated upon and is still receiving medical treatment at the hospital. He was informed that he would require further surgery on his elbow. (Al-Haq Affidavit No. 7625/2012)

Besides farmers, fishermen and rubble-collectors are also affected by the buffer zone restrictions and systematically targeted by the Israeli forces. According to Al-Mezan’s documentation, since the beginning of 2012 the Israeli army’s shelling and live fire in the buffer zone on land resulted in the killing of 19 persons, including 3 children, and the wounding of 87 people. In addition, the Israeli army has arrested 18 persons in the maritime buffer zone and seized 12 boats.

Al-Haq expresses its grave concern about the continuous restrictions imposed on the Gaza Strip’s population and firmly condemns the unnecessary and disproportionate use of lethal force by the Israeli army against civilians.