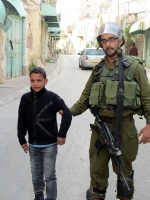 Over the past week, Al-Haq documented the arbitrary arrest of approximately 20 Palestinian children by the Israeli military in the Old City of Hebron. The students, aged between 6 and 16, were violently arrested by Israeli soldiers next to their schools and taken to Checkpoint 160 in the Old City. The students were then transferred to two Israeli police stations close to Ibrahimi Mosque and finally to the main Israeli police station next to ‘Kiryat Arba’ settlement. At the police stations, the Palestinian children were questioned and intimidated by Israeli interrogators without the presence of a parent/legal guardian and/or a lawyer. Several of the children were threatened with torture and prolonged imprisonment if they did not provide their interrogators with the names of children suspected of throwing stones in connection with recent events in the city.

In its latest report Children in Israeli Military Detention, released in February 2013, the United Nations Children’s Fund (UNICEF) stresses that “ill-treatment of Palestinian children in the Israeli military detention system appears to be widespread, systematic and institutionalized.” UNICEF estimated that throughout 2012 approximately 700 Palestinian children – mainly males between the ages of 12 and 17 – were arrested, interrogated and detained by Israeli military, police personnel and security agents, resulting in an average of two children being arrested per day.

On 20 March at approximately 7:30 am, Ahmad, 15, was walking to school on Tariq Ben Ziad Street, which is situated near four other Palestinian schools. The Israeli military Checkpoint 160 is located at the end of the street and controls Palestinians’ access to the nearby Ibrahimi Mosque. Since the death of the Palestinian prisoner ‘Arafat Jaradat, Tariq Ben Ziad Street has been the scene of numerous confrontations between Israeli soldiers and Palestinian residents.

As Ahmad approached the main entrance of his school, he witnessed more than 25 Israeli soldiers chasing a number of students and violently dragging them towards Checkpoint 160, approximately 80 metres from the school. One of the soldiers caught Ahmad and dragged him to the checkpoint, where he was forced into a military truck along with more than 20 other students. Some of the students’ teachers and parents tried to intervene to separate the students from the soldiers but were violently pushed back. Many of the children had to sit on the ground, as there were not enough seats in the truck.

At the Israeli police station close to the Ibrahimi Mosque, the children were ordered to walk to the yard and were forced to kneel down. Shortly afterwards, an Israeli interrogator began questioning the youngest students, while the other children were forced to wait in the heat of the sun for several hours.

After 20 minutes of interrogation, Ahmad was taken back to the yard where he waited with seven other students. After two hours had passed, the soldiers transferred the children to a military vehicle and brought them to the central Israeli police station west of ‘Kiryat Arba’ settlement. There, the children were subjected to further interrogation, without the presence of their parents or a lawyer. Ahmad was interrogated by several Israeli soldiers, who asked the same questions he had already answered during the previous interrogation. Ahmad was eventually released at 7:00 pm. (Al-Haq Affidavit No. 8462/2013)

That same morning, Ramez, 13, was grabbed by an Israeli soldier near his school on Tariq Ben Ziad Street. As in Ahmad’s case, Ramez was taken to the Israeli police station next to the Ibrahimi Mosque by a military truck and subjected to the same interrogation. Ramez denied the allegation that he had thrown stones and stated that he did not know if other children had been throwing stones. The soldier then told the thirteen-year-old boy that he would be kept in the police station for two weeks and then detained at the Israeli military prison of Ofer for ten years if he did not provide information. Despite being terrified by such threats, Ramez repeatedly denied any knowledge of stone-throwing.

Following the interrogation, Ramez was transferred with Ahmad and six other children to the central Israeli police station, west of ‘Kiryat Arba’ settlement, where he was interrogated a second time. He was released that day at 6:30 pm. (Al-Haq 8463/2013)

Although the majority of the arrested children were released on the same day, some of them were transferred to Ofer prison:

Al-Haq strongly condemns the arbitrary arrest of Palestinian children with no specific charges against them and stresses that children deprived of their liberty are especially vulnerable and must be treated with humanity, respect and in a manner which takes their young age into account. The arrest, detention and imprisonment of children should be used as a measure of last resort.

Under international law, children and their parents/legal guardians must be promptly informed of the reasons for the arrest and interrogations must always be carried out in the presence a parent/legal guardian and/or a lawyer. Children must have access to legal counsel without delay and should under no circumstances be subjected to any form of physical or psychological ill-treatment during their arrest or incarceration. Furthermore, children deprived of their liberty must be given the right to challenge the lawfulness of their detention before a court or other competent, independent and impartial authority, and to a prompt decision on any such action.