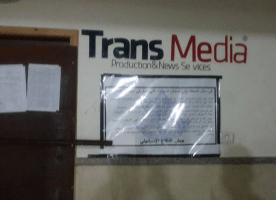 Between 1:50 am and 3:00 am on 18 October 2017, the Israeli Occupying Forces (IOF) carried out widespread and targeted attacks across the West Bank cities of Ramallah, Al-Bireh, Bethlehem and Hebron, targeting a number of key Palestinian media companies, confiscating private property and forcing their closure. An IOF spokesperson admitted IOF raids and closures of 11 media production companies ‘suspected of broadcasting and transmitting incitement and encouragement to terrorist activity … in addition to the seizure of equipment from companies providing services to channels such as Al-Aqsa Channel and Al-Quds TV which have been characterised as unlicensed.1

In Ramallah, the IOF raided and closed Palmedia’s headquarters, which provides filming and satellite broadcasting to Al-Quds TV, Russia Today, Al-Mayadeen and France 24. In Al-Bireh, the IOF raided and seized equipment from TransMedia Company, which provides satellite services to Palestine Today, Yarmouk, Orient, TRT Arabic, Al-Ghad and Alaraby. Ibrahim Bishara Ibrahim Husari, the CEO of transmedia described the closure of the offices in Ramallah:

I tried to reach the office but the IOF prevented me from doing so. One of the soldiers aimed a red laser light in my direction that was issuing from the soldier’s rifle so I stepped aside. From a place close by, I saw the Israeli soldiers taking down different pieces of equipment from the office, such as broadcasting devices, video cameras, and computers, and loading them onto a truck. This lasted for about an hour and a half.2

In Bethlehem, the IOF raided Palmedia’s offices in the Al-Karkafa neighbourhood, ‘detonated the door of the office’, raided the office contents and damaged broadcasting equipment.3 In Nablus, the IOF closed the Transmedia office and seized a ‘Panasonic video camera, black flash camera, computer and internet modem, a DVR-3X device used for live broadcasting, an internet adapter and a hard disc’.4 In Nablus city center, the IOF continued to raid and close Palmedia’s offices, seizing ‘video cameras, computers, production equipment and hard discs’.5

In Hebron, the IOF raided two Palmedia offices and an office belonging to Ram Sat, which provides production and broadcasting services to the Al-Aqsa Channel in Gaza, and seized office and broadcasting equipment. In addition, in Hebron city center, the IOF raided two TransMedia offices, seizing computers, broadcasting equipment, main cables, files and satellite station archives.6 The IOF then detained Transmedia General Director, Amer Al-Ja’bari, 43, at the companies’ offices and his colleague Ibrahim Najib Al-Ja’bari, 27, at his home in the Al-Sha’aba neighbourhood. At 4:00 am, the IOF led Amer Al-Ja’bari to his home, which they then searched. Amer and Ibrahim were transported to the investigation division in Askalan prison and were detained until 26 October 2017. The detention period has been extended by a further 12 days until 7 November 2017.

Unnecessary Use of Force

The IOF employed unnecessary and excessive force to close down the media companies. Alaa’ Hassan Al-Khatib, Director of Al-Quds TV described the measures Israeli forces used to close the media outlets in Ramallah:

Around 1 am on Wednesday 18 October 2017, I heard sounds of explosions, live ammunition, and the movement of vehicles from my home on Al-Irsal Street, close to the Palestine Trade Tower. The sound was coming from the direction of the building. When I headed towards the place, I saw Israeli soldiers surrounding the Palestine Trade Tower and stretching a military cordon around it, forbidding anyone from approaching it…I saw that the Israeli military force was made up of Israeli soldiers and Israeli Border police. There were also more than 10 military vehicles, including a truck.7

Eight Israeli military patrols and two large soldier transport vehicles from about 500 meters away. They were positioned on the main road in front of the commercial building. I also saw 20 heavily armed Israeli soldiers in military clothing standing in front of the [Transmedia] building, preventing anyone from approaching the place and hindering car traffic in the area. I saw IOF soldiers launching stun grenades and tear gas towards some youths who were protesting the IOF raid.8

Documents issued by the Israeli Civil Administration (ICA) and the Israel Defense Forces (IDF) were posted on the doors and walls of the premises. The documents state that the telecommunications companies are closed due to broadcasting of incitement to terrorist attacks that threaten security. Military orders indicate that the closures will continue for six months. Further, any person who breaches the order risks being transferred into interrogation and may face arrest in case the office’s entrance is reopened and the person returns to work therein.

Al-Haq condemns Israel’s attacks on Palestinian media outlets, which are essential for the functioning of a democratic society. It must be noted that journalists are civilians and play a critical role in reporting on situations of armed conflict. The silencing of the media must be internationally condemned for infringing core provisions of international human rights and international humanitarian law. In particular the attacks represent a clear infringement of the right to freedom of expression. Article 19 of the UDHR and Article 19 of the ICCPR guarantee the right to freedom of expression, which includes the ‘freedom to seek, receive and impart information and ideas of all kinds, regardless of frontiers, either orally, in writing or in print, in the form of art, or through any other media of his choice’.9 Israel’s military order providing for the curtailment of the right to freedom of expression is vague and imprecise and does not establish a ‘connection between the expression and the threat said to exist’.10 Instead the closure represents a dangerous and deliberate suppression of the freedom of press.

In addition, the confiscation of property carried out to supress the media and not for military security reasons may amount to pillage. The closure also violates the right to secure one’s livelihood. It is notable in this respect that Transmedia reports losses of 600,000 USD due to the closure and confiscation of equipment.11 On 2 May 2017, the United Nations Secretary General called for ‘leaders to defend a free media. This is crucial to counter prevailing misinformation. And we need everyone to stand for our right to truth.’ Al-Haq urges the international community to condemn and ensure accountability for Israel’s repressive silencing of the Palestinian media and suppression of the truth.