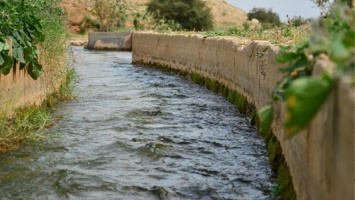 On the occasion of 2013 World Water Day, Al-Haq is pleased to announce the beginning of a ten-day focus on water resources in the Occupied Palestinian Territory (OPT). Between 22 March and 1 April 2013, Al-Haq will release five fact sheets analysing Israel’s extensive and unlawful appropriation and destruction of Palestinian water resources. The first of these, ‘Geography and Hydrology of Water Resources in the OPT’, describes the three primary fresh water sources shared by Israel and the OPT and examines Israel’s disproportionate use of these resources. Al-Haq will conclude its ten-day focus on water with the publication of its study ‘Water for One People Only: Apartheid and Discriminatory Access to Water in the OPT’. The report highlights how Israel’s policies and practices violate the right of the Palestinian people to self-determination and amount to a system of water apartheid.

Water is not scarce in this region, which contains several productive groundwater resources, as well as surface water resources like the Jordan River. However from the outset of the Israeli occupation in 1967, Israel seized and occupied land and exerted considerable military and political efforts to facilitate its illegal exercise of sovereign rights over Palestinian water resources. Israel's practices and policies include the establishment of settlements, the integration of the OPT's water resources into the Israeli system through a series of military orders and the conclusion of the Oslo Accords, which are instrumental to Israel’s continued discriminatory allocation of water resources for the benefit of its Jewish-Israeli citizens.

In the West Bank, some 313,000 Palestinians across 113 communities are not connected to a water network and are considered at high risk of water scarcity. Approximately 50,000 Palestinians in 151 communities live on less than 20 litres per capita daily, which is the minimum amount recommended by the World Health Organisation for “short-term survival” in emergency and disaster situations. In stark contrast, the more than 500,000 Israeli settlers residing in settlements in the West Bank, including East Jerusalem, consume approximately six times more water than the Palestinian population of almost 2.6 million. In the Gaza Strip, more than 1.6 million Palestinians have only one source of water available (the Coastal Aquifer), 90-95 per cent of which is unfit for human consumption.

Water, an essential resource for human survival, is key for food security, health, economic prosperity and the development of a people – all people. However, the effects of Israel’s discriminatory policies and practices in the OPT have virtually deprived the Palestinian population of essential means of livelihood, causing the economic and agricultural de-development of Palestinian communities and thus impeding their full development as a group.

Israel continues to discriminate in its allocation of Palestinian water resources to the benefit of Jewish-Israeli citizens, while maintaining a practice of destruction of Palestinian water infrastructure and effectively denying Palestinians their right to self-determination. These illegal practices violate Israel’s obligations under international humanitarian law. In the face of Israel’s continuous disregard for its responsibilities under international law, Third States must adopt measures to ensure respect of the Geneva Conventions, refrain from recognising or assisting Israel’s violations of peremptory norms of international law and cooperate to bring this illegal situation to an end.